Book Spotlight & Giveaway: A Touch of Class by Leigh Ellwood 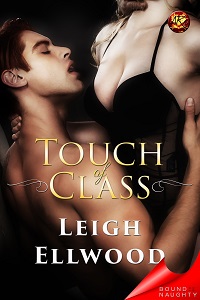 Maeve Kramer wants to explore her submissive side. After months of communicating with Master Q on an online site for kinksters, she's ready for her first play session with him. Love isn't on the table, just safe, sane, and consensual fun.

Jimmy Quinlan, JQ to friends, is ready for a break after a series of standup gigs. His agent wants him to audition tonight for a regional tour sponsored by an up and coming brewery, which happens to employ the sub he's meeting.

Maeve woke from her daydream to find the person ahead of her had stepped away from the reception desk. Behind the polished mahogany sat a young woman with a dark page cut, eyes done up in smoky shadow, and several tiny metal hoops piercing the outer shell of her right ear. Her pale makeup gave her the look of somebody more at home escorting tourists into the Haunted Mansion. Maybe that was the woman’s day job.

“I-I’m sorry. Saffron,” she said, and automatically fished for her driver’s license. No, you don’t need that, she scolded herself and ceased fidgeting. She didn’t want to look like a complete newb.

The receptionist consulted a tablet, swiping down a list. Maeve took a moment to inspect her understated surroundings. The color scheme of soft reds and browns gave the small lobby an intimate feel, like she’d entered an elegant supper club instead of a place where people explored kinky fantasies.

Maeve told Master Q how exhibitionism intrigued her, but having a man spank her in front of hundreds of people left her cold. She considered clarifying a few things with him when the receptionist addressed her again.

“Yes, I have your name here, Saffron. Welcome,” she said and took Maeve’s pass. “You are expected in the Celosia Room.” She reached under the desk, presumably to press a button because seconds later a buzz sounded and the deadbolt in the door behind her gave. “You’ll go immediately to your right and Aaron will escort you the rest of the way. Enjoy your visit.”

“Thank you.” How…clinical. This seemed more like she was going in for a dental appointment. Well, maybe somewhere in this mysterious kink palace one could engage in a bit of pain play dressed as a hygienist. The thought might get her through an actual dentist visit with some amusement.

Aaron—short, mute, naked but for a spiked collar and a pair of tight leather short-shorts—met her at the end of the hallway. She followed him past doors labeled for flower names: Periwinkle, Iris, Daylily, and finally Celosia. All found in Central Florida, if she remembered her local history. She thought to ask Aaron the reasoning behind the names, but he put a finger to his lips when he opened her mouth.

Does that mean I should be quiet, or that he can’t speak? So much to learn about this lifestyle.

You will not touch anything.

She clutched her bag and looked around. The St. Andrew’s cross loomed to her left, the sofa to her right. Above her head, two thick chains bolted in the ceiling hung down to support a vertical pipe. It appeared one could adjust the height by moving the links on the hooks. Here, however, she could probably just reach the bar if she stood on tiptoe.

Aha. Master Q had asked her height not long ago.

Aaron cleared his throat. She whirled around and he gestured to the only table in the room, situated at the corner.

She wouldn’t mess up tonight. For all she knew, Master Q watched from the other side, waiting to see if she slipped.

Aaron next pointed to a buzzer on the wall near the door. Maeve understood it as a panic button, but if Master Q fastened her to something she wouldn’t know how to get to it. She nodded anyway, and the young man offered her a smile before leaving.

Once alone, you will undress until you’re wearing only a black thong.

“I can do this,” she muttered, and cringed. Well, he hadn’t said anything about not talking before she got into position, so she felt safe in that regard. She stepped up to the table and undressed quickly. The shoes came off first, but as she finished the task she asked herself if the shoes remained on the floor or on the table with the rest of her clothing. She didn’t want to scuff the surface…and did shoes count?

Ugh. Details. She was supposed to enjoy this experience. Finally she laid her folded attire on the table, the shoes on top, then her purse. Try and fault me for this.

“Damn, it got cold.” Interesting how the temperature dropped right as she stepped away from the table, clad only in her wispy G-string. She longed to rub some heat back into her arms but she remembered the directive not to touch herself. She’d assumed that meant she couldn’t fondle her breasts or try to rub one out while she waited. Nope. Not taking chances. It wouldn’t surprise her to learn somebody peeping on the other side of the mirrored wall adjusted the AC as she stripped.

The cooling air caressed her cheeks as she walked, the thin crotch of her thong rubbing in a taunting way. She clenched to keep from going mad.

…then position yourself on the strip of red tape on the floor, facing the door.

Leigh Ellwood writes erotica and romance in a variety of genres and pairings. She is a two-time finalist for the Gold Crown Literary Society Award and an EPIC Award finalist and winner.

When Leigh isn't writing, she reads. She enjoys all genres, especially historical fiction.

For more information on other books by Leigh, please visit her official website: www.LeighEllwood.com

2 winners to receive two eBooks from ARe Books