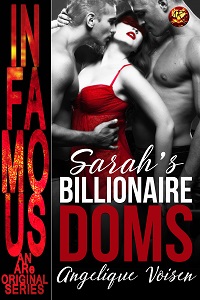 If they can solve the puzzle that is Sarah, she may double her pleasure.

Underneath her polite veneer, ink, and scars, Sarah Evans hides her pain and damaged soul. She strives to remain an enigma to the Bentleys for fear her secrets could destroy them. But the brothers know they’ve finally found the sub they’ve been longing for…and they won’t give up until they claim Sarah for their own.

Damon Bentley checked his watch after he set a tall glass of beer in front of a customer. His brother and co-club owner, Jared, caught his eye from across the room. Jared shook his head in warning, but Damon had never really been the careful Bentley brother. He didn’t plan his next moves, or bother with a game plan.

Right on cue, Sarah Evans walked into the club’s private lounge. Her tense leather-clad shoulders relaxed at the club’s familiar atmosphere. Her eyes looked less guarded compared to the rare moments Damon spotted her outside the club from the security feed in the parking lot.

A tempting smile settled on her generous lips—an open invitation to any top she wanted to play.

Legally, Sarah checked out. She had references from Bobby and James, a couple and long-time patrons of Lance, but something felt off about Sarah the moment Damon and Jared first saw her. Those eyes looked far too haunted for her young body—jaded, wary, and watchful. Sarah reminded Damon of an animal that had been injured before and was reluctant to trust again.

Was Sarah Evans even her real name, or a pseudonym she used? If she had secrets, Damon had every intention of unearthing them over time.

Most of the tops who had done public scenes with her over the past weeks confirmed Damon’s suspicions. Her age made her practically a kid by community standards, but she was no virgin, not a wide-eyed sub new to the scene. Mere observation made it hard to narrow down what kind of play she favored.

The first time she came to the club, she let Bobby and James top her in a public, but for a low-key rigging scene. For her second visit, Sarah went with Mistress Jane, a Domme in Bobby and James’ circle, and took a number of hard implements in an intense scene most new subs wouldn’t do—her stamina impressive. An enigma with a hundred complicated layers Damon and Jared couldn’t wait to peel away.

“What will it be?” Damon asked, feigning indifference as she found a seat on the bar. On the way to him, Damon noted she had already politely refused two offers.

“You got to give me more than that, sweetheart.”

This time, one dark eyebrow rose. Damon, in fact, knew her usual. She ordered the same thing over the past few weeks, or had tops pay for her drink. Damon had to admit Sarah knew how to play her cards. How to look at tops underneath lowered lashes, to appear vulnerable and desirable, and to speak softly, while occasionally biting down on her lower lip. A woman who knew the power of the illusion she cast. Whoever trained her, trained her well, but Damon saw right through the second skin she wore.

Damon found himself intrigued by her manners. How at odds it was with her outside appearance—tight skinny jeans, boots, worn leather jacket, piercings, and ink.

Her attention moved elsewhere again, eyeing the other people in the lounge while she drummed her fingers on the counter. Bobby and James usually hovered protectively by Sarah, acting as backup, but tonight, Damon noticed Sarah came alone. Perfect.

Angelique Voisen is a bisexual, twenty-something, type-2 diabetic and multi-pubbed writer who favors LGBT and menage pairings. She likes experimenting with different sub-genres and her stories may include cogs, fangs, space battles, kinky magic systems and happily-ever-afters. When Angel’s not writing, she’s gaming, watching B-rate action movies, or enjoying teatime with friends while enviously eyeing their cake.

For more information on other books by Angelique, visit her website: www.angelvoisen.blogspot.com

2 winners to receive two eBooks from Are books.