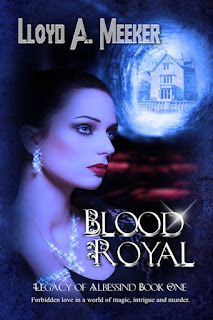 Struggling artist Eva Milaras is in the midst of buying groceries when a bomb blast tears the store apart. A handsome man with mysterious powers saves her life and stuffs her into a limo without a steering wheel—while treating her like royalty. Caught in a deadly web of magic and murder, Eva faces an aristocratic destiny she didn’t know about and doesn't want. Now in a strange world she has to survive the deadly schemes of her new-found relatives as they maneuver for advantage in a murderous royal court.

Talak has loved Eva long before he saved her life, but that love is doomed. She must marry a man from a royal bloodline, and Talak is duty-bound to protect her until she marries—regardless of his torn heart. Together they battle intrigue and betrayal, only to discover they must choose between letting go of each other...or certain death for treason. A choice Eva refuses to make.

Instead of the large, perfect fruit shown in the flyer, the Granny Smiths at Budget Foods were small and beaten up—yet another disappointing win for reality over promise. Eva Milaras gazed at the poor things as she tore off the coupon and stuffed the rest of the pages back into her bag. I guess we’re all bruised in one way or another.

Still, she was sure she could find half a dozen decent ones in the stack. She’d get some yams and put them together in a casserole—a tasty and inexpensive declaration that she was now back in charge of her life in spite of being broke.

She’d tough this out with what little cash she had in her purse until the gallery could figure out what was causing the mysterious delay in her payment. They owed her for two large paintings, and that money would be more than enough to get her back on her feet again. It was just a matter of time. She yanked a plastic bag from the dispenser and began picking through the apples.

She flashed on her little studio. It had great light, decent ventilation, and was within walking distance of most everything she needed. So what if she had to maneuver around her bed to get to the tiny kitchen? With Derek gone, it was all the room she needed for her easel and canvases. She’d love to keep it if she could, but the rent was due in two weeks and...well, she’d go to the gallery this afternoon, see what Leslie had to say. She found two more unbruised apples and took them as a sign of better times coming. She really would take charge of her life—simplify, concentrate on her work, and avoid complications like an unemployed boyfriend.

“Pardon, Serenissima.” A strong, warm voice from behind pulled her from her reverie. Turning, she saw a man, early thirties probably, tall and well-built, dressed completely in black. Who wears such an expensive silk shirt and slacks to Budget Foods on a Saturday morning? They had to be club clothes, but he didn’t look like he’d been out partying all night. And what a great face to paint! A delicious olive tone to his skin, deep eyes, strong angular face-planes, so... compelling, framed by black hair that fell unbound, thick and dangerously sexy, past his shoulders. Great shoulders. Lean waist. Yes, he’d make a terrific model. She found herself smiling at him, realizing too late that it probably wasn’t a good idea. He was already standing uncomfortably close.

“Are you talking to me?” She backed away and tilted her head at the apples. “I’m afraid I’ve picked through these already. Good luck finding more decent ones.”

“Forgive my abruptness,” the man said, reaching toward her, “but you must leave this place with me immediately. You are in gravest danger. Please—we must leave this instant to avoid disaster.”

Suspicion chilled the spark of interest she’d felt. “Look, I came here just for apples.” She slid one hand into her purse, locating her pepper spray. “Leave me alone, please, or I’ll call store security.”

She hoped this guy didn’t know that Howard—the entire security staff of Budget Foods currently on duty— was in his seventies and would never be able to stand up to someone like this man, who carried himself with the smooth precision of a dancer or a martial artist. But at least Howard had a radio.

The man dipped his head and upper body in an odd, twisting bow. “Milady,” he said, his voice tight and urgent. “Please, I beg you. Your life is in real danger. You must trust me in this. I will explain later, but first we must flee.”

Flee? Eva looked around at the worn ordinariness of Budget Foods, with shoppers inching their carts along the aisles. There was nothing here to flee from except boredom.

Her finger found the directional notch on the tiny canister in her bag. “Look, I don’t know you, what you’re on, or what your deal is, but you’re scaring me.” She pulled out the spray and held it up. “This is nasty stuff, and I’ll use it on you if you don’t back off—right now.” She backed away from him again and bumped into the stacked apples. Several of them tumbled to the floor—even more bruises, she thought, as if they didn’t have enough already. She kept her eyes on the stranger, wincing as the apples thumped and rolled on the scarred wooden floor.

In a single fluid motion, the man flicked the can out of her hands and wrapped his arms around her, pushing her toward the floor, covering her with his body. Before she could scream for help, an explosion ripped the storefront window open, and she heard the screams of others.

In a strange, time-suspended clarity on the way to the floor, Eva could feel the muscles of his torso flex and twist, pushing hot against her in a symphony of coordinated physical power. How the heck did he know this was going to happen? Her back hit the floor, and her breath whooshed out in a grunt. She looked up into his face. His eyes stared into hers, fierce as a looming storm. Blue gray, she thought. No, slate. He was heavier than he looked, and she needed to breathe. But he had great eyes. “Get off me!” She pushed against him, and he rolled away without protest.

She sat up. Her ears hurt. The store—or what was left of it—was a mess. She could see two, no, three shoppers on the floor, not moving. In fact, nothing moved, and the stillness was horrible.

A soft groan floated through the smoke from somewhere. Still in its pink sweatshirt sleeve, an arm without an owner lay on the floor. And blood. Lots of it. This was so wrong. Oh, my god. She swallowed several times against a wave of nausea. What on earth had happened?

Then there was movement. All around her, shards of glass began to twitch and shift, becoming dark red scorpions scuttling toward them—dozens of them, different sizes, all the same. Glass shouldn’t do that, she was certain of it.

“Do not move, Serenissima,” the stranger commanded, his voice icy. He turned his back to her, putting himself between her and the scorpions. She stared at his back. He’d been hit by several pieces of glass—two of which stuck partway out of his flesh. All of those would have hit her if he hadn’t thrown himself over her. What the hell is going on?

His hands glowed, and pale fire flowed from his fingers in dancing streams—first carving a circle around them, then striking out at each scorpion. As his fire hit each one, the creature sparked into smoke and dropped, again becoming an inert piece of glass.

What did he just do? Eva looked around, trying to locate her pepper spray, but couldn’t see where it had rolled. She needed to get out of here. But her body was too heavy, felt too far away to respond.

“I don’t know how,” the man growled, “but your enemies have discovered who you are, milady. Now you will have no peace until you reach your Ceremony or they have destroyed us both, for I swear I will not outlive you.”

He stood, bending down. His hair tumbled forward, as if reaching to touch her. “I apologize, Highness, but I have no choice but to carry you to safety. With or without your permission.”

Why is he calling me these strange names? As he reached for her, Eva saw another shard of glass sticking out of his arm. Blood drenched his shirt down to the cuff. His hand dripped red, but he seemed oblivious of the injury. Still dazed, she felt him reach under her shoulders and knees and pick her up as if she weighed nothing.

He was kidnapping her. “Stop!” she screamed. “Put me down! Help!” She twisted against his iron-hard grip and grabbed a coconut from an end display as they passed. Eva pounded it against his chest and face, but he didn’t even look at her as he strode through the carnage to the rear of the store, kicked open the warehouse doors, and jumped off the loading dock to the ground.

On the other side of the alley sat a sleek limousine with darkened windows. As they approached, a passenger door swung open. The man deposited her inside, wrested the coconut from her, and tossed it away. He climbed in opposite her and pulled the door shut, wincing at the reach. The limo began to roll. 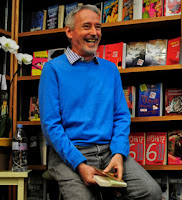 Lloyd A. Meeker credits Walter de la Mare’s “The Listeners” as the first poem to steal both his heart and his imagination. That was in seventh grade, and he’s never been the same since. At university he devoured Lord of the Rings in a single weekend. Then came Bradbury’s Something Wicked This Way Comes, and Le Guin’s A Wizard of Earthsea. Fantasy became his home turf.

He’s led what can only be described as an eventful life, and he’s grateful for all of it. He’s been a minister, a pilot, a janitor, a drinker, a cancer survivor, and a software developer on his way to becoming a writer. His work includes five novels, two books of poetry, a few essays, and several short stories.

He’s happily entangled in a life-long love affair with metaphor and the potent mystery of the Hero’s Journey, especially in its metaphysical and psychological aspects. He lives in southern Florida among friends and family with his husband, working on his next novel, practicing subtle energy healing, reading, wallowing in classical music and celebrating a very active retirement.