Ann Gimpel is a national bestselling author. A lifelong aficionado of the unusual, she began writing speculative fiction a few years ago. Since then her short fiction has appeared in a number of webzines and anthologies. Her longer books run the gamut from urban fantasy to paranormal romance. Once upon a time, she nurtured clients, now she nurtures dark, gritty fantasy stories that push hard against reality. When she’s not writing, she’s in the backcountry getting down and dirty with her camera. She’s published over 30 books to date, with several more planned for 2016 and beyond. A husband, grown children, grandchildren and wolf hybrids round out her family.

I do a little of both. Sometimes the story flows, and sometimes I plan it out. Icy Passage went through several iterations before this final version.

Oh hell yes. All the time, and the sad part is I let them. Wimp that I am.

I’d love to return to Antarctica. I’ve been there twice now, and I’d really enjoy another trip, but my husband is in full rebellion.

Absolutely. I’ve been fortunate enough to travel a lot and I’ve climbed mountains all over the world. I work distant places into many of my books.

No, it distracts me.

Antarctica was always a lifelong dream of mine. I know. Weird. Right? A trip fell into my lap in March 2014. We had very little time to prepare, but we managed. The plan was to fly to Ushuaia and board a boat for the Antarctic Continent and South Georgia Island. Along the way, we were supposed to do a mountaineering crossing of South Georgia, complete with ropes and crampons and living in a tent. The last part of March is late in the year for Antarctica--coming into their winter since the seasons are reversed. We had hideous weather, huge waves, hurricane force winds, but I still adored it. In fact, I liked it so much, we spent the month of November 2014 in Antarctica too. A very different trip, and I'm glad we went both times because we saw different things.

A story started percolating on the first voyage. I was working on another book at the time, so I tried very hard not to start on Icy Passage, but I broke down in the Buenos Aires airport on the trip home and wrote the first thousand words. Aside from doing my damnedest to breathe life into the unbelievable pristine beauty and wonder of that part of the world, I brushed up on the hard science I cut my teeth on as an undergraduate in college.

Icy Passage is a special book for me because it blends my knowledge of medicine, my love of the world under a microscope, and my fascination with Antarctica into one package.

Aw geez. I could write books about that. Everything in this business changes fast, but the two things you always need are top flight cover art and a strong editor who isn’t afraid to point out your flaws.

Yes. I wouldn’t stick with small presses for 25 books. I needed them at the front end because I truly knew nothing, but I could’ve branched out on my own after about ten books. Other authors told me I was nuts, but I wouldn’t listen. Now that I’m fully Indie, I’ll never look back.

Write every day. Find a good critique group, a place where people will tear the living crap out of your writing. Your job is to be strong enough to recognize which parts need changing and which parts truly are your voice.

It’s a tough call between Outlander and LOTR.

The one right before Icy Passage was Heart’s Flame. Here’s its blurb:

Tumble into a world where magic won, but the price was high enough to annihilate almost everything—including love.

Life in a Were bordello is all Keira has ever known. None of the magicians’ guilds wanted her because of her mixed blood, and they didn’t protest when the Weres bound her as an indentured hooker. Mired in the hopelessness of her dreams, she longs for more.

Barrett’s a full-blood magic wielder who operates a magician supply shop in what’s left of Seattle. No one is more surprised than him when the Sidhe leader commands him to extricate Keira from the Weres. He knows her because she loves to while away time in his shop, but she’s always skittered away whenever he got too close. Too bad because she’s twenty shades of gorgeous.

Magic and intrigue throw Keira and Barrett together. Attraction ignites, burning white hot, but Keira has other priorities—like learning to control brand new magic she had no idea she possessed. Besides, Barrett is such a hunk of a man, surely he has lots of women stashed somewhere. He wants her too, has for a long time, but once he spirits her away from the Weres, his job is done. Far better to keep his distance and allow her to seize the destiny she was born for.

Except it’s not what he wants. Her, either. Can they bridge the gap between them before it’s too late?

There are a lot of them. My website, http://www.anngimpel.com is a good place to find my books. I also run my own e-commerce site where readers can find my books. Here’s the link to it. https://store7714213.ecwid.com/

Thank you so much for hosting me, and for a very thorough interview! Some of those questions made me dig deep. 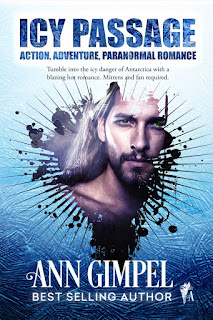 Tumble into the icy danger of Antarctica with a blazing hot romance. Mittens and fan required.

Fresh out of residency, Dr. Kayna Quan opts for a tour in Antarctica. Money is short, so she hires on as medical officer aboard a Russian research vessel headed for McMurdo Station. Primed for almost anything, she plays her paranormal ability close to the vest.

Stationed on remote South Georgia Island for two years, Brynn McMichaels is eager for a change. When cultures of the single-celled organism, archaea, overgrow their bins in his lab and begin shifting into another form, he worries he’s losing his mind and talks with scientists at McMurdo, but they have problems of their own—bad ones. Brynn agrees to help. The weather’s too uncertain to send a plane, so he hitches a ride aboard Kayna’s ship and brings his mutant culture colonies along.

Attraction sparks, urgent, hot and powerful, between Brynn and Kayna, but her disclosure about her magic is a tough nut to crack. It doesn’t help that her dead father is stalking her. Lethal cultures, bizarre illness, and McMurdo’s refusal to let them land force Brynn and Kayna into an uneasy alliance. Will their fragile bond be enough to thwart the powers trying to destroy Earth, and them along with it?