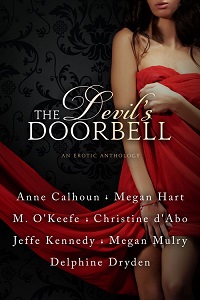 Some say the clitoris is the devil's doorbell, set to summon him forth at the merest touch...

It's time to ring the bell.

In the Garden, by Anne Calhoun

Forbidden fruit is the most delicious...

A wedding in the bucolic English countryside offers Kelsey ripe temptation in the form of a hot groomsman, Julian. Will the illicit attraction satisfy an old craving or stoke a new desire?

Tonight my name is Mary...

Or is it? Sometimes she’s Tiffany or Syd or Bobbi. But whatever face she wears, she returns to the same bar, to find a new man and seduce him, safe in the knowledge that no one will recognize her. Until one man does.

Some activities are definitely not safe for work.

Maggie's sadness over being dumped quickly turns to relief and excitement when she discovers a new freedom...a new Maggie she could have never been with her ex. Combine New Maggie with Tim the Hot Mailroom Guy and an unexpected vibrator...and the office supply room door becomes the portal to a world of devilish fun.

Some doors stay open until you close them.

Moving on from a past love, Bette Douglas has discovered a whole new world of satisfaction and contentment with her boy Damian...but when the past comes knocking, Bette's decision to answer it could change everything.

Devil in the Dark, by Christine d’Abo

When developer Shona needs to beta test her new app - The Devil's Doorbell - she goes out on the prowl for a man who will fulfil her wildest fantasies - oral sex in public. What could possibly go wrong when she finds her devil in the dark?

"Face-sitter wanted, in exchange for free accommodation in Mayfair." -Craigslist

She hadn't planned on being quite so adventurous when she decided to spend the year in London, but when she read the ad, she couldn't resist.

We Are All Found Things, by M. O'Keefe

Rennie's trying to forget her past; her mysterious new tenant is trying to keep his past a secret. But when Rennie finds out the truth about Luka she discovers as much about herself as she does her innocent lover.

Tonight, my name is Mary.

Mary, Mary, quite contrary. That calls for fiery red, steampunk crimson carved into long, perfect ringlets. Not a corset, though. Not for Circle2, a bar that tends toward the conservative, at least so far as cosplay is concerned, unless it’s Halloween or something. Instead I choose the black sheath dress with the deep vee neckline to show off the inner curves of my breasts, and advertise that I’m not wearing a bra. Or anything else beneath.

Have to set the bait properly, after all. And Mary can do what I never could.

For makeup, I go with a retro vibe. I have to layer it on thick anyway, to make myself into Mary, so the heavy stuff works best. Theater pancake in the fairest tone to complement the hair. False lashes and black eyeliner, with a cat’s eye flair. Bright green contact lenses. Lipstick in screaming scarlet, just shades darker than the wig. Amazing, really, how redrawing the lines of lips and eyes change a face entirely.

No one ever recognizes me, not even me. Maybe G_d does, but we’ve had a falling out and I don’t care.

At the last moment I go for boots instead of stilettos. High heels, black leather, over-the-knee. Maybe I’ll let him fuck me in just the boots. Whoever he’ll be tonight.

The night air slaps chill on my bare arms, so I hurry the few blocks to Circle2. I don’t like to wear a coat. They’re too expensive to wear a different one every time and I’d rather spend the money on wigs. Too bad there’s not a wig wear-and-return system, as I never wear the same one twice.

I don’t mind the coolness either. It helps combat the heat. I’m alive with the anticipation, already wet, primed for the release to come.

Tonight I pick out a stool at the bar. Mary is the sort who’d do that. I cross my legs so my hem rides up to show a strip of skin above my boot, turning sideways to display my cleavage.

Come and get it, gentlemen.

“What’ll you have?” the bartender asks. He’s a genial sort, always ready with a friendly smile. Never hits on me, no matter who I am that night, which makes me think he doesn’t take advantage of the women who come to the bar. That’s part of the reason I go to Circle2. It sets a tone to the hookups, I think, as the men who frequent the place are generally clean and polite.

He’s always working, six nights a week. The bar is closed on Mondays. I suspect he owns it, but we don’t have conversations. At least, not connected ones. I’m always a stranger to him. He smiles, asks what I’ll have, then leaves me alone.

Tonight it’s Prosecco and he gives it to me in a tall flute. He’s wearing a shirt that says “The book was better.”

“I’ll get that for the lady.” A tall man, dark skin, pretty brown eyes, makes the offer hopefully. He’s wearing a good suit, has nice hands, long fingers. I’ve never seen him in here before. Yes. Yes, he’ll do nicely.