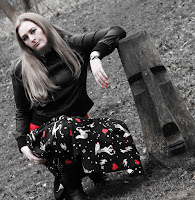 I'm an English author based in the UK and have two YA book series out through the publishers, Evernight Teen. I started my writing career in the short story market and gained over 30 publishing credits before I sold my first novel. I write horrors, urban fantasy and paranormal romance, but do enjoy a good genre mash-up so tend to be open about what I write. As long as it has a sharp, dark edge to it, I'm a happy author!

I'm a plotter; I have a bit of an odd process; I tend to write the scenes I'm most passionate about first and then go back over the plot to fill in the gaps. It's a bit unconventional, but I find that once I've written all the exciting scenes the story itself starts to evolve, and so the weaker ones become more coherent to the overall story, and I'm more committed to not wasting what I've already written and so I know I'll finish the book.

Sometimes. It’s an odd thing, but sometimes characters take on a life of their own and refuse to do what you want them too. In my Battle of the Undead series, my vampire protagonist Britannia certainly is hard to order about. She’s very strong-willed and, with everything I’ve put her through, I think if she ever got hold of me I’d lose a few pints of blood!

I do enjoy a bag of peanut M&Ms when I'm writing. My favourite thing though is to go out to write. I go to a local pub and spend a couple of hours writing and have lunch there, I love a good meal out. I like coffee shops too, but there are usually far too many good smelling cakes there! And I give into temptation pretty easy. I’d like to say that I love spinach and carrots, but unfortunately my sweet tooth usually prevails.

I’m an odd hybrid of both. I love getting up early and making the most of the day, but I also tend to stay up pretty late too.

I'd do a three location themed hop: New Orleans for Mardi Gras, Mexico for the Day of the Dead and Venice for their carnival. Lots of tasty food, music, dancing and cool costumes. I'd also like a stop at Loch Ness to do some monster hunting.

Yes. I live in the UK, but Lost in Wonderland is set in the USA, mainly Alaska. I’d love to visit there one day; in my research it seemed so beautiful and fresh. But, I don’t think I could afford it right now. Maybe in the future when I’m a rich novelist!

I do. I find music is great for inspiring emotion in writing, especially if it's something that, as the author, you've not experienced it first-hand. I'm currently listening to Imagine Dragons, Against the Current, Ruelle and Plumb.

The Twisted and the Brave series are YA supernatural thrillers that have classic children's literature twisted through them. The first book in this series is out now, Lost in Wonderland was inspired by Alice in Wonderland's 150th anniversary last year. I wanted to write a book that honoured the themes without just transposing the whole story into another genre - and Lost in Wonderland was born. I'm currently working on new books in this series based on other classic children's books.

That, just because you are published, you will still get rejections. I’m hoping that emotional gauntlet stops when you get a runaway hit on your hands, but I’m not there yet, so I couldn’t say for sure.

I’d get submitting sooner. There are so many writers out there not brave enough to submit their work and for many years, I was one of them. It was only 6 years ago that I got the courage up to send a story for an anthology call-out. Since then I’ve had over 30 stories published and I have my two YA series with Evernight Teen. I have had rejections along the way, but it’s worth it.

Anything and everything has influenced me. I've never been short of inspiration, just time to execute my dark thoughts. I have a brimming ideas folder on my computer, which I keep adding to. Sometimes I'll just hear a snippet of a conversation, my dark sticky mind then grabs onto it and rolls it round and round till it becomes something terrifying - I then have to exorcise it onto the page. I love reading New Scientist magazine; it always seems to have something interesting in and the website Listverse always has something interesting on!

Start with the short story market. A novel can take quite a chunk out of your spare time and if it doesn’t work or sell in the end it can be heart-breaking. A short story, takes less time and is quicker to submit. You can then start to build up an author’s CV ready for when you do come to sell the novel. 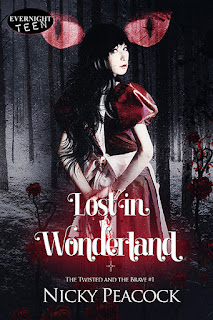 I have so many favourite authors! And they change depending on my mood. For horror, I read Poppy Z Brite or Richard Laymon. For Paranormal Romance I read Kresley Cole and Christine Feehan. For Urban Fantasy it's Keri Arthur and Patricia Briggs. For YA it's Kiera Cass and Cassandra Clare. And for when I'm feeling very brave, I read any paranormal non-fiction book from the publishers, Llewellyn.

Lost in Wonderland – The Twisted and the Brave #1
Monsters, serial killers, and imaginary friends—being a Wonderlander can be murder...

Once upon a time, Kayla was lost. Then she found Wonderland, but not the one you know. Run by ex-government agents and funded by an eccentric Silicon Valley billionaire, this Wonderland is the name of a collective of highly trained vigilantes who hunt serial killers. Now Kayla, aka Mouse, works tirelessly alongside her fellow Wonderlanders, Rabbit and Cheshire, baiting dangerous murderers. But even her extensive training hasn’t prepared her for the return of her older brother…

Shilo has spent most of his life in an insane asylum, convinced his mother was abducted by a sinister Alaskan monster who lures the lost away to feast upon their flesh. And now he’s certain that his sister is in the same monster’s crosshairs. But if Shilo is going to save what’s left of his family, he’ll have to convince his sister that maybe, just maybe, we’re all a little mad.
Goodreads: https://www.goodreads.com/book/show/30117523-lost-in-wonderland
Amazon buy link: https://www.amazon.co.uk/Lost-Wonderland-Twisted-Brave-Book-ebook/dp/B01E9NX1W2/ 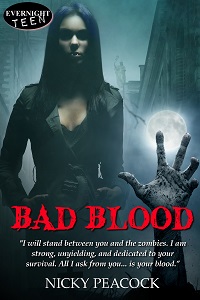 Bad Blood – Battle of the Undead #1
“I am Britannia. I am your protector. I will fend off the hungry hordes of undead hands that reach toward you. I am your steadfast defender. I will stand between you and the zombie masses as they try to taste your flesh. I am strong, unyielding, and dedicated to your survival. All I ask from you… is your blood.”

A 500 year bloody game of vengeance will need to be put on hold if vampires are to survive the zombie uprising. Bitter enemies, Britannia and Nicholas must work together to save un-infected humans, delivering them to a stronghold in Scotland.

Unable to drink the zombie blood, vampires need humans to stay alive. But will they tell the survivors who they are, and what they want from them? Will Britannia be able to hold back her vengeance? Is survivor Josh the reincarnation of Britannia’s murdered true love? And can she bring herself to deliver him to the safe hold? 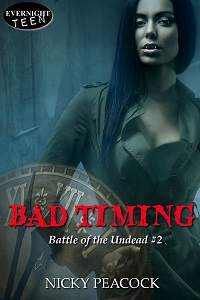 Bad Timing – Battle of the Undead #2
“You know now that monsters are real. Whether they have recently risen to reach for your flesh, or have chosen now to step from the shadows; you are surrounded by them. You also know that I am one too, but I’m all you’ve got and time is running out…”

There’s no rest for the wicked, especially in a zombie apocalypse. Britannia has used every vampire skill at her disposal to keep those she cares for safe, but with old enemies and unseen adversaries moving against her, she will have to push herself to both her physical and ethical limits to survive. Britannia is changing, but will it be for the better?

Please note this is the second book in a series that should be read in order.
Goodreads: https://www.goodreads.com/book/show/28374181-bad-timing
Amazon buy link: https://www.amazon.co.uk/Bad-Timing-Battle-Undead-Book-ebook/dp/B019HHWG08/ 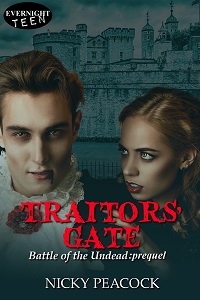 Traitors’ Gate – Battle of the Undead #0.5 (currently FREE)
Only time will tell who the traitors really are…

Sixteen-year-old Lucinda is getting the home-coming from hell. England is in the grip of the War of the Roses and her tyrant father has promised her hand to a vile man three times her age. In need of aid, she seeks sanctuary with an old childhood friend only to find him accused of treachery and harboring a supernatural secret. All too soon Lucinda is caught in a fight that’s not her own but, to be with the man she loves, she’ll gladly take up arms.
Goodreads: https://www.goodreads.com/book/show/31581076-traitors-gate
Amazon FREE buy link: https://www.amazon.co.uk/Traitors-Battle-Undead-Nicky-Peacock-ebook/dp/B01KGBLIN0/


Any websites/places readers can find you on the web.
Blog:   Twitter: Y  A Facebook Page:   UK Amazon Author Page: