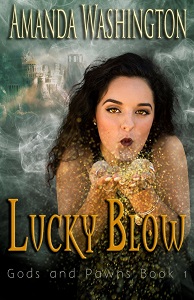 Thanks to the deities in her family tree, Romi has been enslaved to a life of larceny since birth. Well, except for that one night, four years ago, when the goddess of love and debauchery sprang her from her prison, slipped her some sort of magical roofie, and introduced her to an irresistible blacksmith for a little tryst resulting in a child. So when two powerful gods show up and offer her a way out of her thieving lifestyle for good, she jumps at the opportunity. All she has to do is blow on a magical sword and imbue it with luck.

Then she can finally find that guy she’s been dreaming about and introduce him to their son. If only she knew the blacksmith’s name…

But when the same gods use the sword to rip Zeus’s essence from his body, Romi’s son is kidnapped and held for ransom. Now Romi, her mysterious fling, and her teenage griffin babysitter have to steal back Zeus’s essence from a cast of powerful gods, or they’ll lose the child forever.

About the Author:
Amanda Washington is a lover of wacky animals, enthralling books, dark chocolate, and red wine. She's always up for a good adventure (real or fictional), and when she's not building imaginary worlds, she's dipping her toes into reality in southwest Washington with her husband and their boys.