Books for an author’s library
Here’s the tools - go build a story!
Book notations from Amazon.com 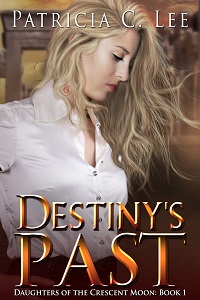 Destiny’s Past
Daughters of the Crescent Moon Trilogy
Book One
Patricia C. Lee

No-nonsense medical examiner, Kelly Richards, relies on the familiar comforts of science and scalpels to get her through the day. So when a not-so-dead guy who claims he's from the past lands on her autopsy table, she considers calling the men in white coats to escort him to a padded room. But Jarek’s old-world ways and hot gaze trick her heart into falling for him—a mistake she swore she’d never make again.

When Jarek, Prince of Leisos, discovers someone he trusts has been slowly poisoning him, he travels to the future in search of a cure. Driven by vengeance, he enlists the help of an impudent scientist to return him to his time.

As they try to find a solution, Kelly struggles with her feelings for Jarek while dodging the police and a visitor from her past.

Caught between his growing desire for Kelly and the need to expose his would-be assassin before they strike again, Jarek must decide between forfeiting his ticket home or losing the only woman he’s ever loved.

Amazon BN iBooks Kobo
Excerpt:
Kelly Richards was at her best when surrounded by death. Calm, centered, and confident, she was exactly where she was meant to be.
She plucked a pair of surgical gloves from a box on the counter, snapped them on, walked over to the open file on the desk and glanced at the information. Caucasian male, mid to late thirties, died of an apparent drug overdose.
Although she couldn't understand or agree with people trying to find answers in chemical substances, she felt a momentary pang of sadness at the needless loss of life.
She'd dreamed of becoming an MD because she wanted to help others. Taught to maintain emotional distance from her patients, their pain and grief brought her own inner struggle to the surface—the one buried deep to avoid living it day after day. Unwilling to turn her back on aiding people, she switched careers and became a Medical Examiner to assist families of the dead achieve closure.
Working the evening shift alone at the county morgue was preferable to being with people who made idle conversation, mainly about stuff she had no interest in. It also provided a way to prevent coworker's well-meant intentions to set her up. Her job offered escape from them, allowing her to hide from her past. And herself.
Five metal drawers occupied the far wall of the room, each containing bodies to be autopsied. Kelly pulled open the door to number three, rolled out the drawer, revealing the man she would work on.
Her eyes widened. Most of the time, the prep crew stripped cadavers of their clothing before putting them in the cooler, but if the autopsy couldn't be performed right away, they didn't bother. His clothing wasn't the issue. It was the type of garments that caught her attention. He wore a short sleeve shirt, almost like a tunic, made of a fine, silky material. His loose fitting pants were woven from an odd cloth, not the usual denim or twill. Dust covered dull tan sandals strapped to his feet.
He was foreign, exotic looking. Dark brown hair, longer than the norm, barely brushed broad shoulders. His skin was light bronze, yet the file classified him as Caucasian. A frown pursed her lips. Odd. The people in admitting didn't usually make mistakes. This male appeared of mixed Mexican or Spanish descent, maybe Cuban. She leaned closer. Hmmm. His skin didn't have the ashen grey pallor of death either. She reached out to touch his arm.
The phone on the desk screamed two jangling blasts.
Kelly started, heart pounding against her ribs. Muttering a soft curse, she answered the phone and gave the caller information on a body she'd autopsied earlier.
She braced the desk with a trembling hand. She hadn't been here long and working evenings still made her jumpy.
Her attention reverted to the file on the body she was supposed to autopsy. What the hell? The measurements were all wrong. No way was the body on the slab five-five. More like about six-three. Did she pull the wrong drawer out? The information at the top of the page confirmed no mistake. There must have been some kind of screw-up. Surely someone didn't switch bodies? Checking the others would be the only way to find out.
Kelly marched back to the bank of drawers. As her hand closed around the handle of the second one, a wheezing breath not her own interrupted the silence of the room. She turned in slow motion to the cadaver lying on the slab beside her. Her throat closed. Similar to a scene out of a horror movie, the dead man's chest rose and fell. Not the final gasp of air escaping lungs at death, he inhaled and exhaled in a slow, shallow rhythm.
Grabbing the edge of the slab for stability, she shut her eyes.
Easy girl. Calm down, it's just your imagination. When you open your eyes, there will be a dead person on the slab, and he will not be breathing.
"Oh, for heaven's sake. This is ridiculous. He's dead."
"Not yet," the body whispered. 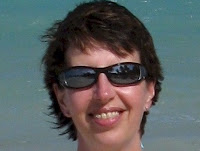 Pat is a playwright and award winning author who has had a love affair with the written word since childhood, many times immersing herself in the stories of Enid Blyton and Carolyn Keene. An active imagination gave inspiration to short stories and her first play as a teen.

Her full-length play, The Truth About Lies, was staged at a regional theatrical competition in 2006. She was selected as "One of 50 Authors You Should be Reading" in 2012. One of her novels achieved a finalist slot in the 2013 International Book Award Contest - fantasy category. She is also the winner of the 15th Annual Writer's Digest Short Story contest for A Holy Night.

Although still in pursuit of a place truly called home, Pat shares her life with her husband and three cats, all of which claim rule over the house at one point or another. Besides dreaming up the next novel, she enjoys traveling, baking, camping, wine, and of course reading – not necessarily in that order.

1 - $25 Amazon gift card plus a print copy of Destiny's Past in EITHER Canada or the continental US.