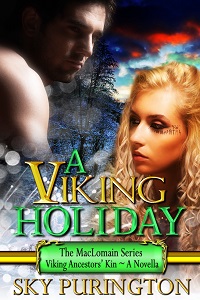 Having time travelers in your life isn’t always easy. Given that he’s said goodbye to several of them over the past few years, Sean O’Conner knows that better than most. Now his best friend Megan has returned from tenth-century Scandinavia to modern day Maine. Not only has she aged over twenty-five years, she hasn’t traveled through time alone. Her troublesome daughter Svala is with her.

Of dragon blood and proud to be Viking, Svala Sigdir has no use for the twenty-first century and makes it evident to all around her. Even so, she will protect her mother at all cost. Meanwhile, she needs a man. Sean to be exact. Despite his aversion, she is determined to make him hers.

Svala might be after him, but Sean wants nothing to do with her. At least that’s what he tells himself as the holidays arrive and he struggles to keep peace in what’s become a battleground instead of a festive Winter Harbor home. At his wit’s end, he finally calls on an old friend’s help. Or so he had hoped. Cast beneath the spell of a powerful Scottish wizard determined to protect his Viking Ancestors, Sean and Svala go on an unexpected yuletide journey. As it turns out, there’s only one way to break free from the spell. A life-altering choice that might very well cost Sean both his sanity and his heart.

Svala wrapped her fur cloak around her shoulders and started to breeze past them as she eyed his crew mate. “So you’re New England’s finest, are you?”
“Naw.” Nick chuckled and nodded at Sean. “Most ladies think he is.”
“Hmm, I’m not sure about that,” she said before she started down the hallway.
“I don’t think so.” Sean grabbed her wrist and stopped her. “Nick, go make sure none of the guys head this way. Tell them I’m catching a rat or something.”
Svala winked. “Or a dragon.”
“Where you gonna hide her, Cap?” Nick kept grinning. “She don’t look like the type of woman who’ll keep hidden if she’s decided otherwise.”
Svala cocked a grin at Nick. “I think I like you.”
“I know I like you, beautiful,” he returned.
“Just make sure no one heads this way, Nick,” Sean reiterated. “And I’ll make sure Svala stays hidden.”
“I betcha will.” Nick chuckled as Sean pulled her toward the meager sleeping quarters.
“I am not staying down here.” Svala started to fight him. “I want to be on deck. I want to help you fish.”
“Hell, no.” Sean grabbed her before she could bolt in the opposite direction. “My men won’t be able to concentrate on work with you around.”
Her eyes met his. “Then you must not lead them well if they are so easily distracted.”
It felt as if the narrow hallway only grew smaller as her eyes pinned his…as he remembered with vivid clarity how she’d felt against him last night. “You know damn well the effect you have on men.”
“I did not dress in modern day clothes.” She pulled the cloak off her shoulders. “See, I am dressed like a Viking again.”
His eyes fell to the fur-trimmed, leather tunic. To her unmistakable curves. He swallowed and tore his eyes away. “What difference does it make? You’re still trouble.”
“Only when I dress like a modern-day woman, yes?” Svala cocked her head. “That is why you fought for me last night, is it not? Because you desired me in those clothes?” She frowned. “Now I am not wearing them. You will not desire me so they won’t either. There will be no trouble. You will not be ashamed of yourself.”
Sean had no idea what to make of her logic. “I’m not ashamed of myself.” But he had been when he overreacted last night. “And trust me, sweetheart, it doesn’t matter what you’re wearing. You’re gonna distract my men.”
She didn’t press closer, but her words made the hallway seem even narrower as she murmured, “Am I distracting you now, Sean? Is that why you seem so convinced?”
When they hit a small swell, he braced his hand against the wall beside her head and bit back desire. “Just do as I ask, Svala. I don’t need any trouble, okay? Not with my men.” He ground his jaw. “This is my livelihood. Please don’t screw it up.”
Shockingly enough, Svala looked as though he’d slapped her. “That’s not why I’m here, Sean…” She trailed off, clearly upset before she gathered herself. “I just wanted to see you fish.”
“Commercial fishing isn’t like normal fishing.” He shook his head. “There’s not much to see, really.”
Except when the nets came up. That feeling of excitement and expectation before they found out how big a load they’d caught.
He had no idea what to make of the look on her face. She was vulnerable in a way he’d never seen her. “I’m sorry,” he murmured, not sure what to say, still confused about why she hadn’t already traveled back in time. “Maybe I can take you out fishing another time?”
“Maybe,” she said softly, her eyes alarmingly gentle as she stepped close. “So how are you going to keep me entertained while you hide me away?”
Ah, there she was. The little Viking he knew so well. Except he wasn’t doing what he always had.
He wasn’t stepping away.
Something about having her on one of his boats, on his turf, on the high sea…was different. Somehow, though it was on his territory, they had found common ground. The sway of a ship. The pulse of the ocean beneath them.
“Sean,” she whispered, clearly sensing a crack in the wall he’d kept between them. Slowly, inch by inch, she unzipped his jacket. “If I understand things correctly, you aren’t needed for hours yet. Why don’t we fill in that time in a pleasurable way, yes?”

Sky Purington is the bestselling author of over twenty-five novels and several novellas. A New Englander born and bred, Sky was raised hearing stories of folklore, myth and legend. When combined with a love for nature, romance and time-travel, elements from the stories of her youth found release in her books.

A $25 gift card to winner’s choice of Amazon or Barnes & Noble.

a Rafflecopter giveaway
at December 08, 2016