Guest Post and Giveaway: Prince of Honor by Nancy Gideon

Five Types of Readers Who Will Love Prince of Honor . . . by Nancy Gideon
1) Those who like it HOT! Clue: The House of Terriot's acronym is H.O.T.! These brothers are deadly, damaged and delicious. Rich and proud, they live like rock-n-roll royalty in their mountain fortress until called to defend against a power great enough to crush them and all their rivals. Joining forces with their enemies creates strange bedfellows and unexpected temptations. Temperature's rising. Feel the burn (and watch the Book Trailer!).
"The Terriot Princes....... Holy Hotness. There is so much deliciousness between all them it's hard not to drool." - Sara Kate, Goodreads
2) Those longing for redemption. I love a bad boy who makes good. PRINCE OF HONOR flips that with a villainess you love to hate transforming into a heroine worth rooting for through my strong, silent type hero's belief in her deep-seated (verrry deep) goodness. Naughty girls make for a fun read . . . and they get all the good dialogue. Our noble prince has baggage of his own that calls for special handling.
" Turow is everything you want in a hero and Sylvia's journey from villain to heroine is brilliantly crafted. 5-Stars" - Susan, Amazon
3) Those rooting for true love against all odds. He's the quiet one, always in the background. She's the traitor who betrayed their clan. He's loved her forever. She doesn't know what the word means. He's sent to bring her home to face their family's justice . . . and most likely death. She seduces him to gain her freedom but can she pay the price demanded for it . . . that of his life? How can they be together when her reputation stains their chance at happiness within their family fold? That's a lot to overcome . . . but where there's a will . . . there's a good story!
"The intense, sizzlin' chemistry between Turow & Sylvia is lethal and flammable - sparks erupting on the page as both as both fight to maintain control of the situation - and their own heart. A Must Read! 5-Stars!." - Cross My Heart Reviews
4) Those eager to get lost in a book. A world unto itself, of wealth and power, quickly moving between steamy New Orleans to the glitter of Las Vegas and a private sanctuary in Lake Tahoe ruled by a yet to prove himself shape-shifter king, served by a band of princely brothers searching for mates strong enough to tame them, on the verge of war with other clans and enemies conspiring at home. Intrigue, secrets, betrayal, oh my!
" A wild rollercoaster ride! I love Gideon's writing style - it captivates from the first chapter and holds until the last page. Her exploration and development (and redemption, in Sylvia's case) of these characters is masterful and intriguing. 5-Star!" Charlene, Kobo
5) Those who want MORE! It's part of a series! If you love these characters, you'll see them again. PRINCE OF HONOR is the first book in the "House of Terriot" foursome, a spin-off from my "By Moonlight" shape-shifter books. Those who fall in love with the world, have the preceding "By Moonlight" books to enjoy. And just a short wait until Book 2 in late January!
"Wow! I loved this book! You don’t have to have read the previous series to get a hold on what the world is like if you start with this book. But, I’m pretty sure you might want to go back and because this was a good one. 5-Stars!" Llaph, Goodreads 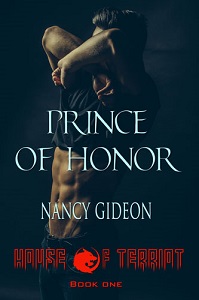 Prince of Honor
House of Terriot
Book One
Nancy Gideon

Strong, silent man of integrity content to serve his new king as a prince in the turbulent shape-shifter House of Terriot. A tracker and relentless hunter, he’s used to running trails alone until charged with returning a traitor to their mountain top home to face the unforgiving judgment of their clan. On the run with the bad girl he’s loved forever, the choice between duty and desire has never been more difficult . . . or deadly.

Could the bargain made to save their lives become reality?

Manipulative schemer or victim caught between a mother’s ambition and a rogue prince’s lust for power? Trust is almost as foreign as the idea of love, but to save herself from certain death, she must risk both on the good man who deserves them . . . from someone worthy. Trapped by the only one who believes in her goodness, will she betray him and run for her life . . . or stay and destroy him with a long hidden truth?

Excerpt –
Book 1 in the “BY Moonlight” spin-off series.
Meet shape-shifter prince Turow from the House of Terriot

It was early. Faint daylight crept in through cracks in the curtains, but the room was still quite dark.

Turow couldn’t move. Couldn’t manage more than a quiet moan. His body wouldn’t respond, his mind refusing to engage. A huge weight of sated bliss layered over him, making simple actions impossible. Every breath he took reminded him why.

The covers tossed over his naked body held her unique smell. His tongue still tasted her. But it was what he didn’t feel that finally goaded him into awareness.

Her heat didn’t rest beside him. In fact, the sheet was cold.

He tried to sit up but something jerked him down. That something a metal bracelet about his wrist, shackling him to the bed frame. His hazy mind recoiled in surprise. How could she have gotten to the key where it lay a room away in the pocket of his coat?

Alert and now wary, Turow let his senses sharpen before opening his eyes to a sight that scarred him, heart and soul.
Sylvia stood on the other side of their shabby room, dressed in her castoff clothes, her lovely, kiss-bruised lips narrowed, her expression carefully masked. She met his gaze directly, hers betraying nothing.

Because they were not alone.

“The Terriot Princes . . . Holy Hotness. There is so much deliciousness between all them it’s hard not to drool!” – Sara Kate, Goodreads

Brothers too H.o.T to handle!

Nancy Gideon is the award-winning, bestselling author of over 60 romances ranging from historical, regency and series contemporary suspense to dark paranormal, with a couple of horror screenplays tossed into the mix, and is currently testing the “Hybrid Author” waters of self-publishing. When not at the keyboard, this Central Michigan writer feeds a Netflix addiction along with all things fur, fin and fowl. She also has written under the pen names Dana Ransom, Rosalyn West and Lauren Giddings.

a Rafflecopter giveaway
at December 07, 2016