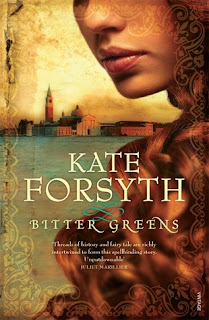 Charlotte-Rose de la Force has been banished from the court of Versailles by the Sun King, Louis XIV, after a series of scandalous love affairs. She is comforted by an old nun, Sœur Seraphina, who tells her the tale of a young girl who, a hundred years earlier, is sold by her parents for a handful of bitter greens...

Selena is the famous red-haired muse of the artist Tiziano, first painted by him in 1512 and still inspiring him at the time of his death, sixty-four years later. Called La Strega Bella, Selena is at the centre of Renaissance life in Venice, a world of beauty and danger, seduction and betrayal, love and superstition, retaining her youth and beauty by the blood of young red-haired girls.

After Margherita's father steals a handful of parsley, wintercress and rapunzel from the walled garden of the courtesan Selena Leonelli, he is threatened with having both hands cut off unless he and his wife give away their little red-haired girl. And so, when she turns seven, Margherita is locked away in a tower, her hair woven together with the locks of all the girls before her, growing to womanhood under the shadow of La Strega Bella, and dreaming of being rescued...

Rapunzel is one of my favourite fairy tales, so when I saw this book I just knew I had to read it.

Before I read this book, I had never heard of the writer Charlotte-Rose de la Force, and she was the woman who first wrote about Rapunzel. Call myself a Rapunzel fan? ;)

Anyway, the book was a delight from start to finish. It's not an easy tale to read, and the horrors of plague and the abuse of prostitutes and other women in the book, while not graphic, is nonetheless quite chilling.

The book is almost three stories in one: the story of Charlotte-Rose, the story of Selena and that of Margherita, our Rapunzel.

While the writing is fantastic, very poetic and lyrical, some of it, I was a bit confused by the time jumps and off to another part of one of the other women's story. The story is not linear, it jumps from time to time, person to person and I was hard pressed to keep track of everything, but that says more about my mind than the author's writing.

The stories themselves are fascinating and with characters who seem so real that you expect them to appear out of the book and invite themselves for dinner. It's a story about women, women's power and women's disempowerment by the men of the time. As the witch said to Selena, "You can be a wife, a whore or a nun."

An intriguing, fascinating re-telling of the Rapunzel story.