Chris has been writing in one form or another for over 15 years. The father of four pursues a wide range of interests from softball to scuba diving, basketball to video games, traveling the world, and of course, writing his next adventure!

When I began writing I just let it flow. But the stories frequently wandered. So... I started using an outline. In fact, I use Michale Hauge's Six Stage Plot Structure as a guideline, and it has made a world of difference. I call it the skeleton, or structure of my stories. Now there's no fluff, no random filler, it all builds to something. It also helps a great deal for set-up and payoff.

Sometimes, but because I plan my stories out, they can't go too far. If anything, characters all have a purpose now, and there's still incredible creativity in how they achieve that purpose - that's the fun part!

Pretty much anything I can throw on a barbeque grill. I'm especially fond of steaks (go figure with a last name like Salisbury) and baby back ribs.

100% night owl. If you want something even mildly coherent, don't even bother talking to me before 9 a.m.

Germany and Australia. Germany because I was born there but my parents moved back to the United States when I was 2 weeks old. Would love to see my birthplace. Australia because I just became certified for scuba diving. I've dove the Caribbean, but who wouldn't want to try the Great Barrier Reef of Australia - count me in!

Yes. In my fantasy books new worlds are tons of fun. But I'm also a huge fan of history, so places of times gone by are fascinating to me too.

Sometimes, but not often. If I do I usually keep the volume low. I'm a father of four kids so finding time with peace and quiet is difficult. I write at night, when the savages are in bed, so I can concentrate - music sometimes is more of a distraction, or more noise, if you will.

Trail of Bones: Adventures of Kepler and Mosley is the first book in a planned series of four novels. The best way to describe it is Chronicles of Narnia meets Lord of the Rings. It's a fantasy, but appeals to young people and adults alike. One element I really try to incorporate in my books is a strong central theme. If the outline and plot is the skeleton of the story, then the theme is what I refer to as the backbone - it weaves throughout the story/characters/dialog/plot etc. Run with Purpose is the battle cry of the Night Wolves, but it's also the story's theme. It means one should not waste energy, time, life.

Wow... that could be a book in and of itself. A few highlights would be first and foremost writing the best story you can. Marketing tactics often change, but if you have a solid narrative to build on, good things can happen. I also think writing is a journey, not a destination. I'm always learning, experimenting and evolving my craft to make it better and better. As far as publishing goes, there's lots of talk and noise out there. You really have to do your research and sift through the pretenders to find the best sources and resources that are credible and have the track record to create results.

On Trail of Bones I started writing the book, then had to take a couple of months off for personal reasons. It took me a while to get back into the flow once I started again. If possible (and this is tough since life can be so crazy) it would be better to have a schedule where I could write more consistently - especially on the first draft where creativity is so critical.

Lots and lots. I love movies, and that medium certainly offers a great deal of influence. I also have a very wide range of interests from team sports, to scuba diving, to coaching my kids in their activities, to church attendance and beyond. My grandparents were pretty incredible people and I loved hearing their stories as I grew up. There's so many interesting things right in your own family tree, yet we often don't realize it.

Write. Write. Write. I've written screenplays and books. My first several attempts were total garbage... but you have to start somewhere, right? Though I would never publish those manuscripts they were incredibly beneficial. First, I finished them, which was a huge accomplishment at the time. Second, it also helped me realize what I didn't WANT to do in future stories and books. It also helped me refine and deliver MY voice, not someone else's. I have another 12 books I've already started notes, outlines and details on. I'm always writing in one form or another as often as I can. Like anything else in life, if you want to get good at it, you have to do it... a lot!

Upbeat, Creative, Tall. I'm six foot six (or two meters tall for those of you across the pond :-)

Lots of those to chose from too. I certainly like C.S. Lewis and Tolkien, but also enjoy Tom Clancy, Michael Crichton, John Grisham, Dan Brown, and others. I'll even read some Stephen King from time to time. 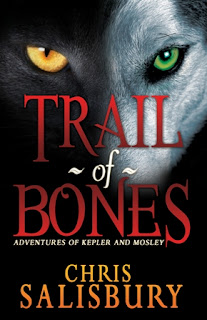 Trail of Bones: Adventures of Kepler and Mosley is a fun, clean, uplifting and exciting story readers of all ages will enjoy. Even readers who prefer other genres than fantasy will be drawn into a world of sacrifice, courage, magic, and darkness... yet hope exists. The books are currently available as ebooks for Amazon, Barnes & Noble, and iBooks (Apple) Here is a brief synopsis of the story.

Mosley, the runt of a litter of Night Wolves, wants nothing more than to be a loyal, strong member of the pack. But when an ancient enemy threatens his friends and family, he faces a choice that could tear him from all he's known and loved.

Born in captivity, the giant jaguar Kepler knows nothing but suffering and loss. He struggles to find his place in this world of terror, and he battles to protect his family without succumbing to the darkness lurking inside him.

Falling captive to the evil Warden, the two are forced to fight in the battle of the beasts known as 'The Trail of Bones'. How will Kepler and Mosley learn to work together? How will they escape a fate of despair and death? How will their choices affect their comrades? Their enemies? And the forgotten magic that could doom all life of their world?

Thank you, Chris and good luck with your books!