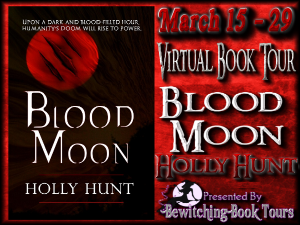 An author living in Canberra, Australia, Holly Hunt writes a collection of works including Sci-fi, Fantasy, Horror and Romance. Currently undergoing an apprenticeship in Butchery, Holly spends her days off writing and watching superhero cartoons.


Holly lives with her partner, Matthew, in a two-bedroom unit crammed with comics and movie memorabilia. She dreams of one day owning a big garden, three dogs and a cat, and can’t wait until that day gets here.

I used to let it flow, but that became hard. So now I just scribble down a basic storyline and let it go from there.

All the ruddy time.

Definitely morning. I'm up too early and down just as early.

Egypt, to see the wonders. When there's no more riots.

Absolutely! But it's usually a diferent mood to the one I'm writing. So I don't get caught up and distracted.

Blood Moon is a book that challenges the current climate. Ferocious killing machines, werewolves can only be controlled by one thing: their goddess, who happens to hate humans. And when she arises, all hell breaks loose.

There's a lot more work in editing a book than in writing one – and that's saying something!

Submit to the accepting publisher first!

Sabriel by Garth Nix. There's just something about it that makes it so easy to re-read it. 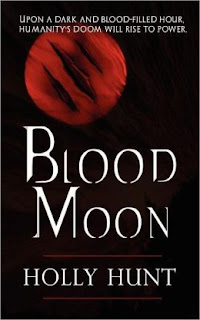 Upon a dark and blood-filled hour, humanity's doom will rise to power.


Werewolves are real. They haunt the woods of North America, feeding on the bodies of humans stupid enough to blunder across their paths. Once rogue and uncoordinated, the rise of their goddess Alsvinth has brought them all together, with one goal: destroy as much of the species as necessary to enslave them within meat farms, to feed the werewolf army taking over the world.

Olivia, a werewolf from western Canada, and her brother Charlie set out to kill the goddess and save humanity. But can the werewolf and human destroy the goddess’s power, or will she prevail and turn the planet into a wasteland?

For the chance to win a copy of the ebook, please just add a comment below :)