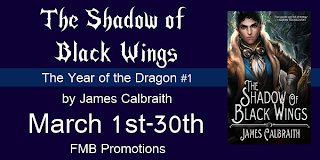 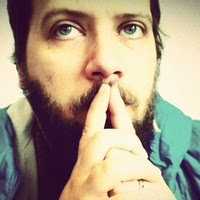 
Growing up in communist Poland on a diet of powdered milk, Lord of the Rings and soviet science-fiction, he had his first story published at the ripe age of eight. After years of bouncing around university faculties, he moved to London in 2007, found a job and started writing in English. His debut historical fantasy novel, “The Shadow of Black Wings“, has reached ABNA semi-finals. It was published in July 2012 and hit the Historical Fantasy and Alternate History bestsellers list on Amazon US & UK.

I have a general outline; I begin with starting conditions – who are the characters, what’s the setting, where are they going – and with the end situation: what’s the character development, what they’ve achieved, how the setting’s changed.

Between these two points, I let the story flow freely.

Constantly! And most of the time, they succeed. I made them too strong for my feeble powers.

It depends on the mood, but right now I could eat any amount of Kani Cream Korokke – Japanese breaded croquet of white crab meat.

I’m a midday sloth :) On weekdays, my work regulates my time, but on weekends I tend to wake very early and do some morning things – check the e-mails, take a shower – and then go back to sleep until noon.

I don’t dream – I plan. If there is a place I have to see, I make arrangements to go there, even if it’s a long term plan.

I think the next place I’d really like to see would be New York. I’ve heard it’s a bit like London with a twist, and I love London, so I’m sure I’ll like it there.

Absolutely! I write about China, Japan, India… is Wales a remote place? I suppose it can be, for some. And since I write historical fantasy, they are doubly distant, in space and time.

I listen to music all the time. I can’t imagine living without it :)

It’s a long-running steampunk fantasy series, set in an alternate, magical version of 19th century Japan, where a Victorian dragon rider finds himself stranded, trying to survive and find his lost dragon.

All this is set against war and political intrigue of Japan just before the arrival of the Westerners.

It’s not easy. It’s not cheap. Success is a matter of luck as much as effort.

I would have spent less money on my first books; I’ve since discovered ways to achieve the same or similar results with less effort and resources. I now shop around a lot more – and I advise everyone to do the same.

Two things: my journeys to Japan, obviously – and the writing of Ursula K. Le Guin, the author of Wizard of Earthsea and Hain cycles. She’s an old fashioned kind of writer, the sort who managed to fit an entire saga in a 200 pages book.

Beware the parasites. Don’t give your money to strangers. Just keep writing, and try to get better with each book. Forget about anything else. Eventually, you’ll get there.

Well, there’s the obvious Lord of the Rings; apart from that, Tombs of Atuan by Le Guin and Ubik by Philip K. Dick. Tolkien, Dick and Le Guin are my Holy Trinity :)

“The Islands in the Mist”, Book 3 of The Year of the Dragon saga:

Guided by the mysterious samurai, Bran and the girls reach the fabled shrine of Kirishima, where his dragon is held. But other forces are also keen to put their hands on the prize…

The Black Wings have landed, and Edo is in turmoil. So is Kiyo, after the recent disturbing events. Doshin Koyata receives a strange blood-red signal in his dreams…

In Qin, Dylan trains an army of volunteers to stop the onslaught of the Rebels, with the help of an old Admiral – who seems to know many secrets…

A detailed and fast-paced historical fantasy based around the turbulent opening of Japan to the West in the middle of the 19th century, “The Islands in the Mist” is the third volume in “The Year of the Dragon” saga.

The Shadow of Black Wings

The Islands in the Mist

Any websites/places readers can find you on the web:
http://jamescalbraith.com 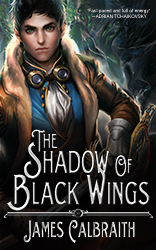 It is the Sixteenth Year of Queen Victoria. In the powerful empire of Dracaland, Bran, a young dragon rider, joins his father on a military expedition to the mysterious lands of the Orient. In the reclusive Yamato, Sato, a tomboy samurai girl, strives to prove her right to inherit her father's school of western magic. Nagomi, a timid shrine apprentice, is haunted by the visions of dark future she must keep secret even from her best friend.


They don't know it yet, but their paths will cross... And when they do, nothing will ever be the same again.

Welcome to The Shadow of Black Wings, a steam-powered romp across the land of dragons, wizards and samurai. It's big, it's fast, it's been compared to Tolkien in terms of world-building, it has strong female characters and lots of carefully researched detail. You will meet the Royal Marines sailing mighty ironclads and Chinese walking machines; mysterious warlords and crazy inventors; you will discover dark prophecies, family secrets and blood-thirsty demons. And all that in just the first volume!