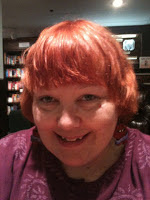 Kathleen has been writing since she was eight years old in one fashion or the other. She has had poems, short stories and novels published. She writes in different genres but YA is her favorite.


I let the story flow as much as possible but sometimes I have to plot things out. I usually do a storyboard, a technique taken from screenwriters for each book after I’m done writing it. I do a timeline check to make sure the dates/seasons/days/years etc. add up.

Oh, yes, all the time. There may be times I let them have their way and other times I herd them back on the right path.

Popcorn with butter and salt.

Ireland. My Great-Grandmother was from Ireland and I’ve always embraced the Irish side of me. I dream of going someday.

I’ve written about Quebec, Ireland, England and Wales so far.

No, I have to have it quiet. Although I do listen to music when I go for a walk especially if I am stuck on a plot point.

WAR OF FEI is the second YA faerie book in the LORE OF FEI series. It’s about faeries reclaiming their land of Fei from the humans who have taken it over.

Oh, so much! I put up my first book on Kindle/Nook in March, 2011 and since then it’s been a learning experience. I’ve learned about promoting, gotten a fan page on Facebook, started a Twitter account, entered writing contests, learned how do my own covers and book trailers, and learned that although writing is a solitary vocation, it really does help to have a writing support community behind you.

Started earlier when I was younger, like in my twenties. I’ve always written and gotten some stuff published over the years but didn’t ever call myself a writer and did other things for a living. Now I wish I would’ve stuck to writing no matter what.

My mother was one of my biggest influencers, she always encouraged me to follow my dreams and she inspired me and supported me. She passed away in 2006 and I still miss her. My other influencers have to be my daughters who encouraged me to write down my stories when they were little. They pushed me to publish my first YA novel, WITCH HUNTER.

Read in the genre you want to write in, go to workshops/conferences if you can, build a writing community, use beta readers and critique partners to make your writing better and write every day, no matter what. Never give up your dreams!

It all depends on what I’m reading. My favourite book of all times is The Dragonrider series by Anne McCaffery. I also love Harry Potter.

Check out my Amazon Central author page for all of them. I have fourteen books published to date, two novellas and two short stories.

The faeries are ready to declare war on the humans who threaten to take away Fei, the land of the faeries. They enlist the help of the elves who do not trust either the faeries or the humans.


The cost of war almost proves too much for the faeries as more and more of them are lost in battle.

Will it be enough to win their hard-earned freedom or will the battle be lost forever?