Book Review: Taming of a Sex God by Virginia Nelson 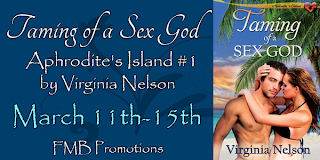 
Yes has been a sex god for centuries. No one wrote stories or songs about him but they sure do remember to call out his name at the peak of pleasure. Satisfying the world by fulfilling their carnal needs, he is no stranger to Aphrodite's Island. When his sister, troublemaker that she is, calls him home for what she deems a 'special' job, he shudders to think what she could want.

Being frigid is worse...

Katie can't get off. She's determined it's physically impossible. She's tried everything--toys, men, women, flogging. It's just not happening. Finding an ad for a tropical island promising 'ultimate fantasy experiences' she figures it's worth a shot. It's not going to work, but it's worth a shot.

Passion beyond her wildest dreams...

Who knew the one man who can trip her trigger would refuse to touch her? The more he backs off, the more he tempts her. Katie is fascinated by the man Miss A has sharing her hotel room but, although he seems attracted, he won't do the deed.

Oh, this was a fun and enjoyable romp on a tropical island that promises to cater to your every fantasy. Katie's friend Becca wants to go and Katie goes along, but she doesn’t hold out much hope that she'll ever get what she wants, that she can finally have an orgasm.

The mysterious Miss A has her sharing quarters with her brother, Yes, and Becca has just been taken off by Adonis. Katie is convinced they are in some strange cosplay themed resort where everyone seems to think they're a Greek god or goddess. Yes is certainly built like one with sculpted chest and rugged jaw and no matter what she does, Katie can't stop thinking of him.

But Yes seems unaware of her charms and seems to be avoiding her. If only she knew! Yes is finding Katie very attractive and the fact that she's convinced she's frigid only makes him more curious to find out more, for he's convinced that Katie is a very passionate woman if only she could find the right person to share it with.

After a few days spending time with Yes, as friends only, things heat up when they are splashing and playing about in the sea one day and Yes leaves her there, gasping, frustrated and for the first time feeling a fierce arousal. But Katie is no shy wallflower waiting for Yes to make the first move and it is she who begins their seduction at last.

Katie is such a wonderful character, even though it's a short story, it feels complete, nothing feels left out or glossed over, particularly the love scenes which sizzle off the page. Yes is masterful, but not overpowering, Katie gives as good as she gets and although a lot of time is spent on describing the physical actions, their emotions are involved too, which makes it that much hotter in my opinion.

Complimentary copy supplied by FMB promotions for the purposes of review.
at March 12, 2013