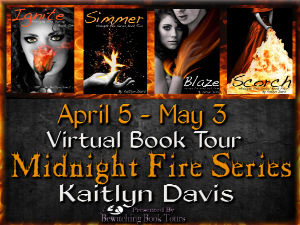 Kaitlyn Davis graduated Phi Beta Kappa from Johns Hopkins University with a B.A. in Writing Seminars. She's been writing ever since she picked up her first crayon and is overjoyed to finally share her work with the world. She currently lives in New York City and dreams of having a cockapoo puppy of her own.


A little bit of both! To me, outlines are essential. Before I start writing even a word of the story, I outline the entire plot. But, if I get halfway through and all of a sudden get this amazing idea, I'll change course. I'm too much of a planner to just start writing with no sense of direction, but I would also never want to limit the story just because I already outlined it a certain way.

All the time—and I let them! I figure, it's their story to tell and I'm just the messenger. And Kira, the main character of the Midnight Fire Series, definitely has a mind of her own!

Oh man, I love it all! I'm a big foodie! If we're talking dessert, I go simple with ice cream or frozen fruit. But for meals? Risotto, lasagna, fried rice, burger and fries…anything really! Except fish, for some reason I really don't like fish…

Night owl… I don't really wake up until I'm 2-3 cups of coffee deep!

I've always wanted to go on a safari in Africa! Maybe The Lion King affected me in more ways than I realize, but I just think it would be amazing to see those animals in real life when they're not in cages.

Yup! The characters in the Midnight Fire Series travel all around the USA, but they also make a pit stop in Europe—I won't say where because I don't want to give it away!

Nope! I like to write in silence. If I listen to music, I tend to stop typing and start belting the lyrics instead.

Scorch is the fourth and final book in my Midnight Fire Series! I think it is the perfect ending to what has been a crazy adventure with twists, turns and some hopefully heart-stopping romance.

That even though I write the books alone, the publishing process is a joint effort! I could not have done it without my family, friends, diligent editors, and fantastic readers.

Maybe, but I try not to dwell on that sort of thing! I have absolutely no regrets—this has been the best experience in my life.

Write the story you want to tell—don't worry about the trends, or what's popular at the time, or what anyone else might think.

I can't choose! I love way too many books to pick just one. But some of my favorite authors are J.K. Rowling, Cassandra Clare, Richelle Mead, Lynne Ewing, Tamora Pierce, Robert Jordan, Scott Westerfeld, and a ton more!

Since Scorch is the last book in my series, here's the blurb for Ignite instead! It's the first book, and it is FREE wherever ebooks are sold!
Amazon | B&N | iTunes | Smashwords

"With one last look, one final search of the lines of his face for some sign, Kira turned and ran away from the sound of the man she loved laughing in the face of her death."

When Kira Dawson moves to South Carolina, she meets Luke, a blond goofball who quickly becomes her best friend, and Tristan, a mysterious bad boy who sends shivers down her spine. Kira knows they're keeping secrets, but when she discovers Tristan's lust for blood and her own dormant mystical powers, Kira is forced to fight for her life and make the heartbreaking decision between the familiar comfort of friendship and the fiery passion of love.

Ignite is the first book in the Midnight Fire Series. It is approximately 65,000 words.

"Slowly, like a whisper almost blown away in the wind, two words streaked across her mind: 'Kiss me.'"


Kira may have survived the eclipse, but her troubles are far from over. She's headed to Sonnyville with one goal in mind: to learn more about her parents. But with Luke and Tristan competing for her heart and Diana gunning for her head, time is running out on the search for her mother. And the closer Kira gets to answers, the more terrified she becomes. The conduits fear her, the vampires fear her, and Kira is starting to wonder if maybe they're right...

Simmer is the second book in the thrilling Midnight Fire Series. It is approximately 65,000 words.

“Kira gulped, unable to stop the growing sense that everything in her world was about to change.”


With Aldrich’s note burning a hole in her pocket, Kira is off to England to finally reunite with her birth mother. But what begins as a dream quickly turns to a nightmare and Kira is left questioning everything she has ever known. Can she be the conduit Luke wants her to be? Can she be the rebel Tristan needs her to be? Or is she something else? Something no one, not even Aldrich, ever saw coming…

Blaze is the third book in the thrilling Midnight Fire Series. It is approximately 65,000 words.

"All it did was remind Kira that time was running out. That she needed to choose. Or a lot more than a forest would burn. The whole world would crumble."


Aldrich escaped…again. Tristan forgot…everything. And Luke, well, Luke was getting more than a little impatient. But those were the least of Kira’s concerns, because something else happened in England—something she was trying desperately to forget. A wedge of evil had lodged itself in her heart, a little black hole had nestled into her flames, and it wasn’t going away—not anytime soon…and maybe not ever.

Scorch is the fourth and final book in the thrilling Midnight Fire Series. It is approximately 65,000 words.


Giveaway a Rafflecopter giveaway
at April 17, 2013