He’s almost certainly the world’s only steampunk-fantasy author who holds a master’s degree in English, a certificate in health science, an Advanced Diploma of Hypnotherapy and a certificate in celebrant studies (rituals for transition through crisis). He's worked as an editor for a major publishing house, which is just one of the reasons he has no interest in being published by a major publishing house.

I'm in transition at the moment towards doing more planning. For Realmgolds, I mostly let the story flow, but I'm using the Dan Wells Seven Point Outline, and I've written a synopsis for my next book before I started writing.

My characters are very strong-minded, especially the women. They want to take over everything. I have to be quite firm.

Morning person. Married to a night owl, which is a source of occasional conflict.

Never. I seem to use the same part of my brain for listening and reading, and I can't do both at once.

Realmgolds is a steampunkish fantasy novel. It tells the story of the struggle between a rabble-rousing upstart and the legitimate ruler of the realm of Denning, who really wanted to be a history teacher, but now has to make history instead. Fortunately for him, he gets the able assistance of his ally Victory, the brilliant but eccentric ruler of the neighbouring realm. Unfortunately, an ancient magical treaty between their realms means she can't send him any troops...

I used to work in publishing, so I know that side fairly well (though it's changed a lot in recent years). I've learned a lot about storytelling, though, how to give a story shape and direction.

I have a lot of respect for Lindsay Buroker. She's a smart indie publisher of steampunk fantasy, which is what I want to be.

Treat it as a craft. Work hard, don't cut corners, and be professional. 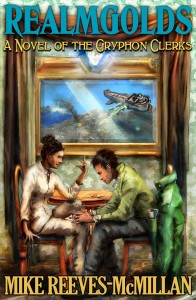 The Human Purity movement is growing in power and influence in Denning, attacking dwarf businesses and caravans and inciting popular rebellion against the central government, with the passive or active support of many of the ruling Golds.

Opposing them almost alone is the Realmgold, a young man named Determined. His problem is that, even though the Realmgold is meant to be in charge, nobody is paying much attention to him.

Victory, who rules neighbouring Koskant, would love to support Determined, but an ancient magical treaty between their realms means she can’t send in her troops, her skyboats or her pressure guns. What she can do, though, is share a new magical communications technology – and her elite corps of Gryphon Clerks…

(Not in the same setting) City of Masks, a political fantasy without magic; and Gu, a near-future science fiction novella about a disruptive technology and how it changes people's lives.

My blog is at http://csidemedia.com/gryphonclerks
I'm often on Google+ at http://gplus.to/mikerm