Book Spotlight: Dancing in the Flame by Ann Gimpel 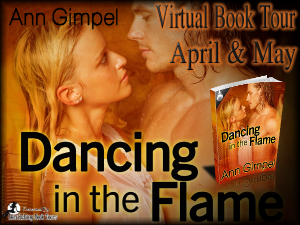 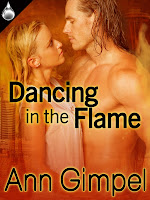 Life in a were bordello is all Keira has ever known. Because of her mixed blood, none of the magicians’ guilds want her, or protested when the Weres bound her as an indentured hooker. Mired in the hopelessness of her dreams, Keira longs for more.

Barrett, one of the Daoine Sidhe, runs a magician supply shop in what’s left of Seattle. No one is more surprised than he when the Sidhe leader commands him to extricate Keira from the weres.

Magic and intrigue throw Keira and Barrett into one another’s arms. Convinced they have a job to do, they struggle against the heat of the passion between them. Until it gets way too hot to handle.

Barrett bent over, hands on his knees. His limbs were heavy, weighted with weariness. Even the mud-streaked asphalt looked tolerable as a place to lie down, assuming he found some cover. He strengthened the magic surrounding him and sucked air. The goddamned humans and their atomic weapons had poisoned the atmosphere. It would probably hasten the end of the war, but at what price? His gaze swept over an uninterrupted vista of gray. The sky, clouds, remaining buildings, and ground were the same depressing color. He didn’t have to try very hard to hear the Earth cry and curse her guardians, the Sidhe, for doing such a piss poor job of protecting her.

“The weres, druids, and witches are ready to talk. The fairies agreed to moderate.” A familiar voice sounded from behind him.

“Hmph. Nice of them to consent to parlay while there’s still something left to salvage.” Barrett straightened and turned to face Caelin. With the Daoine Sidhe queen long dead, he was their de facto leader. All the other Sidhe answered to the Daoine, so Caelin was responsible for thousands of them. Too bad he hadn’t thought of that before dragging them into the war…

Tall and wraith-thin Caelin looked about as trashed as Barrett felt. His shoulders sagged. Bright red hair had escaped his warrior braids and hung to his waist in tangles. His battle leathers drooped in tattered shreds. Bits of grit, leaves, and dirt mingled with everything. His sharp-boned face was streaked with grime. The only part of him which looked the same was his eyes: a deep, dark blue.

“Isn’t it, though?” Caelin’s customary sarcasm rang through. He spread his arms wide. “That last atomic blast decided things.”

“Maybe it’s for the best.” Barrett met Caelin’s gaze. “We’ve been fighting for close to ten years. If the humans hadn’t felt threatened and pulled out all the stops, this might have turned into a hundred year war—if any of us lived that long.”

Caelin snorted. “We coexisted with those bastards for thousands of years. The minute they got a whiff they weren’t the only ones on the planet, they overreacted.”

A corner of Barrett’s mouth twisted wryly. “You have to admit magic can be a bit off-putting for humans.”

“Well, they’ve fucked themselves. There won’t be very many left once the atomic dust settles.”

Barrett quirked a brow at his leader. “To borrow from your vernacular, they’ve managed to fuck us, too, by dying. We’re going to have to figure out how to keep things running without them.”

“Point taken. Be sure to toss it on the table when we draw up a Covenant with the other magic wielders.” Caelin shook his head. “Despite all our efforts, there are more weres left than any of the rest of us—”

Caelin waved him to silence. “Be that as it may, we must secure their cooperation. Otherwise, our numbers are too small to maintain any semblance of civilization. There’s electricity, water, the Internet, the cellular system, and food.” He ticked them off on his fingers as he talked. “It’s fortunate enough structures are still standing to house most of those left.”

“Where and when is this meeting scheduled?” Barrett hoped he could catch a few hours of sleep. He’d been up for the better part of the last two days.

“It’s now. In the Opera House, since it’s mostly intact. Walk with me.” Caelin set off at a moderate pace.

Barrett caught up to him. His muscles ached. A headache pounded behind one eye. Normally, he would have used magic to ease both, but he was seriously depleted. What little remained of his power was focused on filtering the air before it entered his lungs. “I still wish—”

“Don’t say it. Even in my worn-out state I have enough magic left to read your thoughts.” Caelin’s jaw set in a hard line Barrett recognized only too well. The Daoine Sidhe leader had never liked being questioned, nor was he open to discussion about his decisions.

Fine. Read my thoughts then. You can pretend they don’t exist, but we both know differently. The loss of their queen, Ivanne, had heated the rift between weres and the Sidhe to a boiling point and proven disastrous. She’d been a skilled mediator, navigating difficult political waters with grace and skill. Caelin was a warrior. He saw the world in black and white. Convinced the weres had murdered Ivanne, he’d convened the Council, dominated it with his anger, and led the Sidhe to war. At first it was just Sidhe against weres. Then witches and druids jumped into the fray, some on one side, some on the other. The only magical beings who’d remained neutral were the fae and the fairies.

“That may be true.” Barrett grabbed Caelin’s upper arm and forced the other man to a standstill. “War never solved anything. Not in human history, or in ours, either.” He swung an arm wide. “Look. Just look what a mess we’ve made. It will take decades for Earth to recover, if she ever does. Deep within my soul, she reprimands me over and over for our part in the destruction.”

A sheepish look flitted across Caelin’s face. He ran a hand down it, distorting his features. “Glad I’m not the only one she nags.”

“It’s not like I did this singlehandedly.” Caelin sounded defensive. “The weres could have capitulated anytime.”

Barrett let go of Caelin’s arm. He pounded a fist into his open palm. “Damn it! You know better. Weres never apologize. They’re constitutionally incapable of admitting they were wrong about anything. It’s their dual natures. The animal side takes over and—”

“Spare me.” Caelin’s hands settled on Barrett’s shoulders. Fingers dug in hard enough to make him wince. “If I made a mistake avenging Ivanne, it is water long passed under the bridge. Think, man. That was ten years ago. We must play the ball where it is today. There’s little enough of our royalty left. Here in the Americas, it is you and me. I must have you standing solidly beside me. The weres will sniff it out soon enough if we are not aligned with one another.”

Barrett blew out a breath. Annoyance scoured his nerves. He hated to admit it, but Caelin was right. If the war was finally over, the next task would be crafting a Covenant with terms advantageous to all Sidhe, not just the Daoine. And making certain it enlisted everyone’s aid healing the damage done to Earth.

He ducked from beneath Caelin’s hands, squared his shoulders, and swept straggling copper-colored hair out of his face. “You need have no fears on that front. You have always had my allegiance and support.” Of a height with Caelin, Barrett locked gazes with him. “You are a brilliant tactician. And a fearless warrior. I only wish you had a bit more in the way of warmth and compassion to temper things.”

A wry grin split Caelin’s face. He didn’t smile often. The effect was electrifying, bringing all his latent beauty to the forefront. He punched Barrett lightly. “I wish for a lot of things, too. Problem is I rarely get any of them.” He inclined his head in a mock bow. “After you.”


Ann Gimpel is a clinical psychologist, with a Jungian bent. Avocations include mountaineering, skiing, wilderness photography and, of course, writing. A lifelong aficionado of the unusual, she began writing speculative fiction a few years ago. Since then her short fiction has appeared in a number of webzines and anthologies. Several paranormal romance novellas are available in e-format. Three novels, Psyche’s Prophecy, Psyche’s Search, and Psyche's Promise are small press publications available in e-format and paperback. Look for two more urban fantasy novels coming this summer and fall: Fortune’s Scion and Earth’s Requiem.