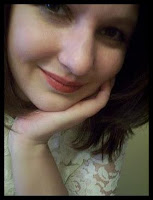 Laura Bickle's professional background is in criminal justice and library science. When she's not patrolling the stacks at the public library, she can be found reaming up stories about the monsters under the stairs. She has written several contemporary fantasy nov-els for adults, and THE HALLOWED ONES is her first young adult novel. Laura lives in Ohio with her husband and five mostly-reformed feral cats.


For more about Laura, please visit her website at: www.laurabickle.com

She’s also at Facebook   Do you plan everything or just let the story flow?

I’m a plotter. I love building a skeleton of a story and then adding flesh to it. Staring at the blank page scares the daylights out of me, and the outline is my security blanket.

Mass revolt does occur often enough. It’s really very enjoyable when they jump ship from the outline and want to tear up the pages on their own.

I wish I was a morning person, but I’m naturally a night owl. There’s something that seems very virtuous about writing pages in the morning, but that rarely happens for me.

Someday, I would love to visit Japan. I love looking at the pictures and daydreaming about seeing what it would be like in person.

I’ve written about places as far away as Chernobyl, but I usually work with settings like Ohio’s Amish country and Detroit, which are much closer to home for me. My favorite backyard place to visit was Serpent Mound, an effigy mound in Ohio that’s shaped like a giant snake.

I like instrumental or ambient music. It keeps my dreaded inner editor mollified while not being too distracting.

My newest release is THE HALLOWED ONES, a YA thriller. Katie is on the verge of her Rumspringa, the time in Amish life when teenagers can get a taste of the outside world. But the outside world comes to her when a helicopter falls out of the sky near her house. Katie must confront not only a massive disaster unfolding in the world outside her community, but also the threat of darkness in her own increasingly fragile society.

One of the most important things I’ve learned is that it requires the same disciplined work habits that other jobs do. There are deadlines, accountability, and needing to work well with people. I feel like my previous work really helped me to be able to take writing as a serious endeavor and treat it accordingly.

If I had it to do over again, I would have worked up the nerve to start submitting my work earlier. I was always very concerned about rejection, but now I’ve learned that it’s just part of the business.

I think a lot of my writing has been influenced by the things I see around me. Whether it’s a city, a rural landscape, or a deck of Tarot cards, I think that inspiration is always close at hand if I keep an open mind.

The best piece of advice I’ve ever received is to set up a word count calendar and use it. It’s too easy to let the days and weeks slip by without anything productive happening. To that end, I really suggest that writers try National Novel Writing Month at least once. It got my excuses and blocks out of the way, and helped me learn that what I thought were my limits were not really limits. They were just walls I’d set up in my head.

Sucker for animals. If it’s stray and furry, it moves in.

My all-time favorite is Robin McKinley’s HERO AND THE CROWN. I read it when I was a pre-teen, and fell in love with fantasy ever after. It was the first book I’d read that had a female protagonist who slew her own dragons. I was hooked.

THE OUTSIDE (Harcourt, September 2013)

One girl.One road. One chance to save what remains…

After a plague of vampires is unleashed in the world, Katie is kicked out of her Amish community for her refusal to adhere to the new rules of survival. Now in exile, she enters an outside world of unspeakable violence with only her two “English” friends and a horse by her side. Together they seek answers and other survivors—but each sunset brings the threat of vampire attack, and each sunrise the threat of starvation.

And yet through this darkness come the shining ones: luminescent men and women with the power to deflect vampires and survive the night. But can these new people be trusted, and are they even people at all?

In this edge-of-your-seat thriller, it’s up to one Amish girl to save her family, her community, and the boy she loves . . . but what will she be asked to leave behind in return?


Thanks so much for hosting me! :)

“One of the most promising debut novels I’ve read in a great while… I’d highly recommend this book to anybody who reads fantasy. It reminds me in many regards…of another exceptional first novel…Emma Bull’s seminal War for the Oaks, and there’s not much higher praise that I can give.” —Elizabeth Bear on Tor.com

“Gritty but never grim, Embers is a truly urban fantasy, where the soul of a city haunts every page. I can’t wait for more of Anya and the unforgettable Sparky!” —Jeri Smith-Ready, award-winning author of Bad to the Bone and Shade

Unemployment, despair, anger--visible and invisible unrest feed the undercurrent of Detroit's unease. A city increasingly invaded by phantoms now faces a malevolent force that further stokes fear and chaos throughout the city.

Anya Kalinczyk spends her days as an arson investigator with the Detroit Fire Department, and her nights pursuing malicious spirits with a team of eccentric ghost hunters. Anya--who is the rarest type of psychic medium, a Lantern--suspects a supernatural arsonist is setting blazes to summon a fiery ancient entity that will leave the city in cinders. By Devil's Night, the spell will be complete, unless Anya--with the help of her salamander familiar and the paranormal investigating team --can stop it.

Anya's accustomed to danger and believes herself inured to loneliness and loss. But this time she's risking everything: her city, her soul, and a man who sees and accepts her for everything she is. Keeping all three safe will be the biggest challenge she's ever faced.

EMBERS is available now from Amazon and Barnes & Noble.

Read an excerpt at http://books.simonandschuster.com/Embers/Laura-Bickle/9781439167656/excerpt

"The second book in Bickle’s series about Anya Kalinczyk is just as wonderful as the first—Anya is a compelling and likable protagonist and Bickle does an outstanding job in her portrayal of the city of Detroit; there are ruins, yes, but also hope in the ashes. Anya never takes herself too seriously and there is a scene in a baby supercenter that is absolutely not to be missed. (4 stars)" - RT Book Reviews

Anya Kalinczyk is the rarest type of psychic medium, a Lantern, who holds down a day job as an arson investigator with the Detroit Fire Department—while working 24/7 to exterminate malicious spirits haunting a city plagued by unemployment and despair. Along with her inseparable salamander familiar, Sparky, Anya has seen, and even survived, all manner of fiery hell—but her newest case sparks suspicions of a bizarre phenomenon that no one but her eccentric team of ghost hunters might believe: spontaneous human combustion.

After fire consumes the home of elderly Jasper Bernard, Anya is stunned to discover his remains—or, more precisely, a lack of them; even the fiercest fires leave some trace of their victims—and she is sure this was no naturally occurring blaze. Soon she’s unearthed a connection to a celebrity psychic who preys on Detroit’s poor, promising miracles for money. But Hope Solomon wants more—she’s collecting spirits, and in a frantic race against time, Anya will face down an evil adversary who threatens her fragile relationship with her lover, her beloved Sparky’s freshly hatched newts, and the wandering souls of the entire city.

SPARKS is available from Amazon and Barnes & Noble

Read an excerpt at http://books.simonandschuster.com/Sparks/Laura-Bickle/9781439167687/excerpt