Shane Michael Murray was born in Wodonga, Australia. He graduated Australian National University with a double bachelor, one in Asian Studies, and one in Mechatronics Engineering (Honors). He currently works in Japan as an automotive engineer. He spends his spare time reading, going to the gym, jogging, and break dancing.

For this novel I let the story flow. It is a simply story with one POV, so it was not too hard. It made it hard to decide what to do next at points, but I tried my best to leave that to the main character, Talking-Wind. Basically nothing was planned, it all just kind of happened.

Yeah. They take over all the time, especially in this novel. In my other book I am writing it is epic fantasy with six POVs, so it need a bit more focus on the plot, I cannot let one character go too crazy (except when its so fun I just can't resist :D )

Europe. I love history and old places. It is oen reason I love temples in Japan so much (I live in Tokyo).

Yes. My experiences in Japan have heavily shaped the world featured in my up and coming epic fantasy. Though not so much in the heroic fantasy novel I just released.

Yes. Check out Sindrannaras on youtube. I also link a lot of music on my website, www.shanemichaelmurray.com

It is told through the eyes of an orc, and is a little different to most fantasy tales. There no world ending events, just a simple story of family, friendship, finding your place, and survival.

Start simple. Make a single chapter work. Then try a single POV. I originally tried to write a multiple POV epic fantasy novel without the skills for it. It was a bit of a mess. My recently published one POV heroic fantasy flowed much better.

No. I am very happy with how orcs turned out, and as my character tend to take over my stories, he probably would not have let me do it any other way (I am not crazy, really).

River God by Wilbur Smith, and Ian Irvine novels. I enjoyed these because the main characters often had little in the way of combat or magic skills. They had to solve their problems with wit and determination. 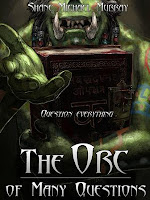 The Orc of Many Questions

Orcs don’t like questions. Everybody with a brain knows that. Orc tribes save their strength for fighting, not thinking. They survive by raiding the lands of weaker races, repeating it year after year to offer tribute to the masters of their mountain home.
Life on Firebrand Peak is short and nasty. Death comes quickly and the fallen are soon forgotten. Generations pass, yet the tribe remains brutally the same.

Until one little orc starts asking too many questions.