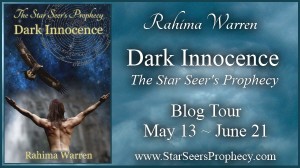 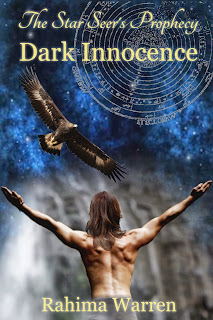 For many years, author Rahima Warren has been delving into the deep mysteries within, retrieving gems of wisdom and healing. Through an unexpected alchemy, those inner gems have been distilled into an enthralling and sensuous adventure of the soul, The Star-Seer’s Prophecy, a fantasy trilogy.


What if a slave who knows only pain and evil is the only one who can restore the Sacred Balance of the mortal and divine realms?

Kyr has never even dared to think of disobeying Dauthaz, his vicious, all-powerful Master called the Soul-Drinker, yet the Star-Seer’s Prophecy foretells that he is the only one who can end the Soul-Drinker’s horrific reign. Hunted by his vengeful slave-brother, Gauday, and guided by Rajani, the Warrior Mage, Kyr begins a journey beyond anything he has ever known, painfully discovering new truths of human kindness and divine forgiveness. Ultimately, his frozen heart melts and he finds himself in love with Jolanya—only to learn that his beloved is forbidden to him by her vows as a Priestess of the Banished Goddess.

This is a story of mystery and intrigue, courage and endurance, secrets and forbidden love, set in an ancient world of blood sorcery, ritual, and healing magic. Manipulated by enemy and friend alike, Kyr struggles to recover his true essence from the darkest of ordeals, as he fulfills the dire predictions of the Star-Seer’s Prophecy.

This story portrays a challenging journey of healing and transformation. Join the hero, Kyr, as he begins his arduous and poignant journey from the torments of evil, pain, and remorse to the blessings of healing, love, and enlightenment. Allow yourself to be touched by his plight and his bravery; to discover what resonates with your own journey; and perhaps to be healed and inspired by his story.   Visit the author at: http://www.rahimawarren.com/   And read more about the books at http://www.starseersprophecy.com/

Rahima Warren is the author of Dark Innocence: Book One of the Star-Seer's Prophecy, a deep, rich novel of the healing journey. With Master's degrees in Clinical and Transpersonal Psychology, she was in private practice as a licensed psychotherapist for over 20 years. In 2006, Rahima retired to focus on her expressive painting, creative writing, and spiritual studies.

In her work with clients recovering from abuse, she was awed by the human capacity to heal, and to reach new levels of forgiveness, wholeness and happiness. She also learned to trust the psyche's own process. This enabled her to allow a dark and mysterious story to flood forth unhindered: Dark Innocence: Book One of the Star-Seer's Prophecy.

Rahima is a third-generation native of California and resides with her husband in Northern California, where she periodically chases squirrels off the wild bird feeders, and deer away from her roses. Her life-long love of fantasy is her parents' fault: they left sci-fi & fantasy magazines with fascinating cover art lying around the house.

Dark Innocence: Book One of the Star-Seer's Prophecy on Amazon: http://amzn.to/11eiksn

Dark Innocence: Book One of the Star-Seer's Prophecy on Barnes & Noble: http://bit.ly/WTiwvA

Oh, no planning or outlines for me! I wasn’t even planning to write a fantasy book, let alone a trilogy. But the hero of this story – his name is Kyr, by the way – had other ideas.

Yes, indeed! Kyr not only took over the story, he took over my life and turned me into a writer so he could live out his journey, literarily-speaking.I’ve told that story, How My Hero Turned Me into a Writer, here.

Definitely dark chocolate – the ambrosia of the goddess, for sure!

Perhaps both? I’ve been found writing at almost any time of the day or night, but generally not after 2:00a.m. nor before my first cup of tea in the morning.

Ursula Le Guin’s Earthsea; Patricia McKillip’s magical worlds. Oh, you mean on Earth? On the top of my list is Bali. From what I hear, it is a most magical and spiritual place and that is why I would love to go there.

My story is set in a mythical land called Khailaz, so it is distant in that sense, but like our Earth in many ways, except that sorcery and magic are real in Khailaz.

Well, I don’t exactly listen to it, but I always have my favorite “writing music” playlist on as I write, music that evokes the mood of my books. It helps to open up my imagination and creativity. Some of my favorites include: Ngaio Gamelan by David Parsons; The Hours by Phillip Glass; Spiritual, Spiritual and 5 by B-Tribe; everything by Amethystium, and by Bluestone. Songs with words, heavy rhythms or big changes distract me, so it’s mostly instrumental and flowing, with a touch of the exotic to transport me to Khailaz.

Sure! Readers have called DARK INNOCENCE: BOOK ONE OF THE STAR-SEER'S PROPHECY an enthralling and sensuous adventure of the soul. It’s the story of the slave Kyr’s arduous journey of healing and transformation from the evil and pain of the Soul-Drinker’s hell to redemption and love. Readers have called it a gripping, intense and yet inspiring story of mystery and intrigue, inner courage and endurance, secrets and forbidden love, set in an ancient world of blood sorcery and ritual magic.

Kyr is not the usual intrepid hero of many fantasies. His is the hard path of the inner journey toward wholeness. Born and raised as the cold-heartedly obedient slave of the evil Soul-Drinker, he knows nothing but enduring and inflicting terrible suffering at the whims of his vicious master. Rescued, he begins to learn that there are such things as kindness, friendship and love in the world. This knowledge brings home to him the terrible things he has done as a slave. Overcome with remorse and self-loathing, he seeks to do penance at the hidden Zhovanaya Sanctuary. There he must undergo the painful process of facing and confessing his crimes. The most difficult part is facing his own pain and rage for all the torture and rape he has endured since he was a small boy.

Wow, so much! After writing the first draft of the entire trilogy in completely right brain-intuitive fashion, I realized I needed to engage my logical left-brain and learn to write fiction. I studied many books about this subject, and worked with an experienced editor. I learned a lot and revised my first book numerous times. Then came the challenge of publication. I tried the traditional approach, but also read up on the whole self-publishing revolution. Finally, I concluded that even with one of the big six publishing houses, I would have to do my own marketing—the part I find the least amusing—anyway. So I went ahead and essentially self-published the first book, Dark Innocence, with the help of my editor and her indie press. Just recently, I got the ebook versions published through BookBaby, which is my blog tour is celebrating.

What has all this taught me? I guess the first thing is: write what you have a great, fiery passion for, that will sustain you through the whole publishing and marketing process. Second, don’t expect miracles, especially if you have written something that doesn’t fit in one of the standard niches, as I have. Dark Innocence is an unlikely combination: a painfully dark but ultimately inspiring and hopeful fantasy about the inner journey of recovery and healing, written by a former psychotherapist, for goodness’ sake!

Hmmm. Well, no. I may not have done this in the most efficient, logical manner, - building a ‘platform,’ writing a book to fit in a particular niche, etc. as so many advise. But that would not have been anywhere near as much fun for me as letting Kyrturn me into a writer!

First, I started reading fantasy and sci fi as soon as I could read. I still love to read fantasy. My favorite authors these days are Ursula LeGuin, Charles de Lint, Sheri S. Tepper, Carol Berg and Patricia McKillip. Second, Natalie Goldberg’s books on writing, Writing Done the Bones and Wild Mind, gave me permission to write freely, as did my training as an Expressive Arts therapist.

First, find someone who loves your book as much as you do to help you keep the faith in it. For me, that person was my editor. Second, it’s important to have outside help in editing your book into its best shape. Get critiques from a writers’ group or other sources. Hire a professional editor if you can. I spent twice as much time on editing and revising of my book than I did on writing it. Third, if you are attached to instant success, fame and fortune, you are most likely setting yourself up for disappointment. I suggest you get clear on your motives and expectations. Also, ask yourself how much time and money you actually can invest in your book. Fourth, expect the publicity and promotion to take a lot of time and effort – years, perhaps. And even then, you may not get the results you wish for.

In my case, I wrote my trilogy as a sort of secret passion, thinking I’d never show it to anyone. When it turned out to be a story that is a powerful gift of healing to its readers, I dedicated myself to getting it published and sharing it with the world to the best of my ability and resources—not as my ticket to fame and fortune, but as an offering of guidance toward healing and forgiveness.

Not fair! How can I possibly choose just one? If you put a gun to my head at this moment, I’d choose The Book of the True Game by Sheri S. Tepper. No, wait! Charles de Lint’s Somewhere to Be Flying. But what about…

Rahima is giving away prizes, including an e-copy of her book at each blog stop on her tour AND a Grand Prize Giveaway of a Custom Jumbo Tote Bag with your choice of fan art, chosen from here: http://www.starseersprophecy.com/fan-art/, plus other goodies, including a signed copy of Dark Innocence for one lucky winner, shipped to anywhere in the world!

1) To win a book: Leave a comment on this blog post on who is your favorite fantasy hero to be entered to win a book. Be sure to leave your email address in the comments so we can contact you if you’re the lucky winner. This giveaway ends five days after the post goes live.

2) To win the Custom Jumbo Tote Bag with Rahima’s fan art of your choice, or a signed copy of Dark Innocence, or other goodies, click the link to go to Rahima’s website here: http://www.starseersprophecy.com/blog-tour/ and enter the Rafflecopter at the bottom of the page. A winner will be selected on June 21st.

Enter for the Grand Prize on Rahima’s website here: http://www.starseersprophecy.com/blog-tour/