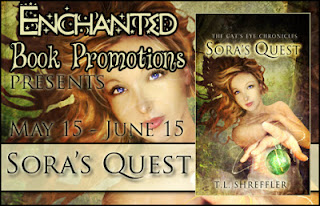 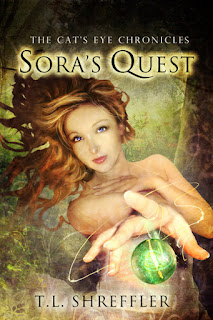 Sora Fallcrest was born into Nobility. She had it all: money, maids, a fancy estate. But she never expected to be kidnapped.

Abducted from her manor, Sora is plunged into a world of magical races, arcane jewelry and forgotten lore. She finds herself at the mercy of a dangerous assassin, haunted by an even darker past. She yearns for freedom, but he won't let her go -- not when her Cat's Eye necklace is the only thing that can save his life.

But the necklace itself presents a problem. It is an ancient device from the long forgotten War of the Races, and its magic has the ability to steal souls. Can Sora learn to wield its power -- or will the power wield her? (Winner of the SKOW 2006 Best Fantasy Award)

T. L. Shreffler lives in Los Angeles, CA. She loves diversity, fantasy, romance, iced tea, long walks, philosophy, and thrift store shopping. She recently graduated with a BA in Badass (Creative Writing) and her poetry has been published consecutively in Eclipse: A Literary Journal and The Northridge Review.

Sora looked in the mirror, staring at the swirls of face paint and the long, layered, elaborate dress. It was burnt pink, a shade too close to her skin tone, with sparkles and sequins. Several crystals were sewn expertly into the neckline.

“It's hideous,” she finally said, tugging at the long ruffled skirt.

“Honestly, Lily?” Sora turned to look at her maid, one sleek blond eyebrow quirked. The expression bordered on comical, exaggerated by her gold-flaked eyebrow paint, which arched dramatically across her forehead. She hadn't been able to touch her face all day. The artisans had come that morning to paint her skin in rich, deep tones, all in preparation for the Blooming. It had taken hours to apply. “I don't want to go through with this,” she said. “I've never had a birthday party before. Why start now?”

Lily opened her mouth, but she appeared speechless.

“Leave the ball! Forget the Blooming! Let's just go!” Her eyes returned to the mirror, to the thin gold clay that caked her face, the silvery powder overlaying her cheeks. “I've never gone to town before,” she murmured. “It's my birthday, isn't it? Let's go exploring.”

Lily, a frail young woman with bobbed black hair, seemed rigid at first, like a ruffled swan. Then her shoulders slowly melted. Her face softened. Her long, pale neck lost its tension. She took her mistress gently by the arm, turning her toward the vanity, perhaps the least decorative article in the room. It was broad and antique, standing on four solid oak legs, the bases carved to appear like lion's feet.

Sora's bedroom was large enough to house several families. A rich, heavy rug covered the floor, a deep rouge, far more vibrant and beautiful than her salmon-pink dress. It was thicker than grass and softer than wool. A massive bed took up an entire corner of the room, enclosed by red drapes, decorated in smooth silks, thick furs and a dozen pillows, all of the softest goose down. Her furniture was ornately carved of dark cherry wood and most of it had been passed down for generations. Frivolous silks clung to every surface. Intricately detailed tapestries covered the walls, portraying outdoor tea parties, great hunts, dashing hounds and a giant, rearing stallion.

“It's not just a birthday party, you know,” her handmaid said, assisting Sora into her chair. Lily was five years older and knew her mistress' moods as surely as the weather. She undid Sora's hair, a cascade of deep golden waves, and combed it out with a boar-bristle brush. “Your father has been preparing for this all year. He's invited half the royal court and almost the entire Second Tier.”

“Second Tier, that's fine. I am one, after all,” Sora murmured, rolling her eyes. “Country Nobility I don't mind. It's the City Nobles that I can't stand. Snooty gossips, the lot of them. I hope they don't show.”

“Oh, hush. Your father invited a few. Marrying into City Nobility would be quite a dream come true-”

Sora turned in her chair, staring up at her maid—who also happened to be her closest friend. “Truly?” she exclaimed. “Have you forgotten every other conversation we've ever had?”

Lily shrugged in exasperation. “I still don't understand it! Any normal person would jump at the chance to marry City Nobility. You would never have to lift a finger again, not even to eat your own breakfast! Huh, what I would do with that kind of coin....” And her eyes glazed over, as they always did when Lily thought about money.

Sora sighed and turned back to the mirror. She understood as much. As Country Nobility, or the “Second Tier,” she lived with comfortable wealth. Just not considerable wealth. Noble blood didn't guarantee fistfuls of money, after all. Her family's nobility had been won through military service. The Fallcrests had spawned several generations of Captains and Generals. But now the times of war and battle were long past. Peace had flourished in the Kingdom of Err for five-hundred years. It had been a long, long time since a Fallcrest had done anything of note.

Her father would be ecstatic if she landed a City Noble. Slip into the highest ranks, the First Tier, second only to the King himself. Rumor had it that she was beautiful enough.

But she wasn't like other Country Nobility, who daydreamed of the Royal City of Crowns, of riverboats, masquerades and, of course, the yearly Carnival. An entire four weeks of mystifying feats, fine wines and legendary debauchery. No, Sora's experience of City Nobility was much the opposite, and it left a bad taste in her mouth.

Hardback signed copy of the book and a necklace