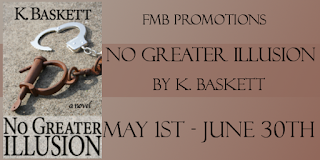 In the very near future, surging advancements in technology have afforded American citizens with a number of conveniences. Of these, most notable is the SmartTag, a microchip embedded under the skin between index finger and thumb, housing all manner of personal information such as bank account details, medical history, voter registration and more.

This tightly-woven tale follows the lives of several very different people – Tealia, a free-spirited and intelligent photographer battling with conflicting emotions for her ex-lover; Mercer & Viera Scott, a power couple barely holding on to their marriage as the priorities of success and parenthood slowly become skewed between them; impoverished single mother, Naria, content with her reliance on both her current lover and government assistance to make ends meet; and the Holton family, wealthy beyond measure, enjoying carefree days of privilege and luxury.

Their status quo, however, is about to be undermined as America reacts violently to the brutal assassination of a highly esteemed female presidential nominee on the evening of the debates. As the entire nation struggles to make sense of the ensuing chaos, fear and distrust ramp up to dizzying heights. The end result is a series of grave consequences that will drastically alter life as they know it, making them all wonder how much of their world is but an illusion.

A captivating story that is at once gripping and dark, this brilliantly painted picture of a dystopian America cautions against the power of technology and the folly of taking anything for granted. Haunting and lyrical, No Greater Illusion is an astounding debut novel with a powerful message that lingers long after the final page is read.

THAT NIGHT, I BECAME an eye witness to murder. The cop who pulled the trigger might have claimed it was “self-defense” or “protection from an imminent threat,” but all I saw was a 90-pound woman brandishing a lug wrench that was almost too heavy for her to lift.


“Conspiracy!” she yelled at the top of her lungs and used all of her might to swing the weapon at a nearby car, shattering the driver’s side window.

“Stand down,” ordered the nearest police officer in a booming voice, as he and countless others surveyed the entire riot scene unfolding before us.

“Never. We want justice,” the lady screamed, successfully breaking out the rear passenger’s side window this time. The officer made a move toward the woman and she turned to him, struggling for purchase as she raised the lug wrench over her head. A crazed expression morphed her face into a vacant wasteland, so that she appeared to be gazing at and through the officer at the same time, eyes and mouth sloping downward, gaping. She looked to be coming straight from the office, dressed conservatively in a pencil skirt and high heels, which I noticed because they were so inappropriate. Skinny as the tool in her hands, she posed little to no physical threat and could have easily been subdued by some other method, so I was surprised when the police officer drew his gun.

“I’m warning you. Stand down,” the officer growled, his eyes two hard pebbles of flint, sparking as he aimed the gun squarely at the woman’s heart.

She moved with no forewarning and surprising quickness. Like a lioness, she pounced, and got close enough to the officer to be able to see the color of his eyes before he fired his weapon. It was nothing like in the movies. His gun made more of a popping sound rather than a loud bang. In all the noise it could have been mistaken for something else, like a car backfiring or a tire exploding. She collapsed instantly, freefalling, slamming to the pavement with so much force her body seemed to bounce once before landing in a final thud, facedown, her fist still clutching a tool used for changing flat tires. Her entire back was a mass of gore from the exit wound, blood so dark it looked black in the low light, soaking her smart silk blouse and pooling around her body in an ever expanding puddle.

Even in the midst of the mayhem, there seemed to be an almost pure silence that descended over the immediate circle of people surrounding the woman’s corpse. Their stillness attracted even more attention than the gunshot and the crowd around the fallen woman grew. The officer began to slowly back up, a look of dread on his face. He spoke into his shoulder radio, “Two-forty-eight requesting backup at Sixth and Watson. Code thirty. I repeat: I need units at Sixth and Watson, immediately.”

The officer’s call for backup shifted the crowd’s focus from the dead woman to him.

“He did it,” someone spoke clearly from the group. “The cop.”

Another yell came from my right. “Ol’ racist ass cop!”

The crowd closed in and began to slowly advance toward the officer. I stood on the perimeter, not sure if I wanted to get involved.

“Fall back,” the officer ordered, pointing his gun into the crowd now, aiming in the general direction from where the slur came.

Various shouts rang out in response, more people getting agitated now and too many of them yelling at once to clearly decipher any one phrase.

“I will not hesitate to discharge my weapon,” he warned.

We see that, I thought. Obviously he was ready to pull the trigger yet again.

The closer the crowd got, the more the officer seemed to be losing his aura of authority, his confidence getting smothered by fear, his eyes now showing uncertainty where before there was boldness. Not a soul had responded to his call for backup. The city’s police force was sorely understaffed and everyone knew that in this chaos there weren’t nearly enough officers to go around. The gun trembled slightly in his hand as he pointed it at the closest target, a young black man in his early twenties advancing to the front of the crowd. He was shirtless, wearing nothing above the waist but several large black tattoos, his athletic body coiled with intent.

“Crooked cops,” the young man stated passionately, as a matter of fact. “I fucking hate the police.” He glanced back at the others and raised his voice with that last statement.

They thundered their hearty agreement.

“So what we gonna do about this racist motha fucka?” the young man snarled, having assumed leadership of the crowd by their earlier assent.

“Don’t try me,” the officer shrieked. He made another useless call for backup, panicked and on edge. The crowd had backed him into a wall and like any cornered animal he was ready to attack.

“Grab him!” The suggestion came in the form of a growl.

The young man sprang forward, all that tension uncoiling from his chiseled muscles in a single smooth leap. With a wild look in his eye, the officer pulled the trigger. In his agitation, he actually missed the young leader and instead his bullet found someone else who screamed out in agony as their flesh was torn. This indiscriminate shooting incited the crowd even more, and in the time it took the cop to fire another shot into the group, he was completely buried under a pile of angry bodies, swarming around him like bees to the hive.

Jack of all trades, master of none - save for the art of procrastination - K. Baskett lives by the motto, "Never do today what can be put off until tomorrow." K. firmly believes that you aren't really interested in the author's hometown, spouse, children or pets, and has therefore decided to spare you the details. No Greater Illusion is the author's debut novel.