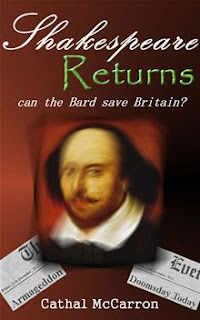 William Shakespeare is back!


According to ancient Mayan prophecies, 2012 is a portentous year for humanity. On the evening of 20th June 2012, the hallowed midsummer night, William Shakespeare finds himself mysteriously transported from London in 1610 to London in 2012.

"O brave new world, that has such people in't!"

Whilst adapting to these shocking and strange new times, with its different language, technology and culture, Shakespeare explores modern London with hilarious, profound and surprising results.

He unwittingly becomes the only person who can prevent a cataclysmic disaster hitting the UK on the 21st December 2012. Utilising his most potent weapon - his mastery of English - can the Bard save Britain ...?

Mystical, poetical, comical and suspenseful, Shakespeare Returns is an original and gripping page-turner for both fans of his plays and lovers of contemporary fiction with a fantastical twist.


Leon despised Shakespeare at moments like this. That infernal playwright had been causing him exasperating stress for weeks. Emitting a slow sigh of frustration, he dropped the sheet he had been holding then intentionally thumped his head heavily on the edge of the desk in front of him. A low stack of papers was pressed together under his forehead. He checked the fine wound on his left hand and wondered if paper cuts from a print-out of a Shakespeare script gave him the voguish credibility of a melancholic self-harming artiste; then he considered torching the whole damn bundle. He’d left it late to memorise his lines – as usual – and was struggling to catch up. He checked the time on his phone: 9:46 pm. It was still light outside but he had closed the curtains to create a gloomy ambience to match his mood. Less than fourteen hours later he was going to be acting as Lysander in a full dress rehearsal of A Midsummer Night’s Dream, the final rehearsal before the one-off public performance the following night, 20th June, the midsummer night. He wasn’t ready. Four hundred year-old plays are not for twittered brains, he thought.

Leon was a third-year drama student at the Central College of Speech and Drama in London but was worried he wouldn’t make it to graduation. A natural idler, he’d skived through the first and second years of the course with the barest minimum amount of effort with which he could escape. If a corner could be cut, Leon had his slacker scissors primed. He’d persistently heard the same feedback all through school, college and now university: bright, talented, able, but lazy and underachieving. He was the only child in a comfortable, middle-class family from Bath. His dad had suggested that Leon should follow him into engineering; his mum had suggested following her into a legal career. After expressing their preferences for him to study something, anything, more vocational, they had eventually accepted his unshakeable insistence that he was going to be an actor. They had been continually supportive, financially and emotionally, of his time at university. “It’s my investment in your future feckless superstardom,” his dad had joked. Leon had liked that; he considered feckless superstardom a worthy goal.

Yet he had fought desperately to land the role of Lysander, insisting to Mr Rumpold, his sceptical tutor, that he could handle it. However, faint but insistent doubts had soon begun to form. There were too many lines. The timing and intonation were both too tricky. The stage cues were too complex. There’s not enough time. Why didn’t he settle for a smaller role? Theseus or Egeus would have been considerably easier. But then neither of these roles was one of the stars of the show. And Leon craved to be the brightest star of the show. He couldn’t permit students whom he regarded as demonstrably lesser actors than him to take his limelight, whilst he was shunted around in a minor role, ignored in the background.

He reached his right hand up and across the desk without lifting his head. His hand moved over the desktop like a robotic arm in an arcade machine dispensing prize cuddly toys. His fingers closed around a can of Red Bull. The hand drew the can back over and under the desk. He opened it and listened to its gentle effervescence. It was his third can in two hours; he had another five cans in reserve.

Besides idle ambition, there were other issues affecting his frustration levels. He could not countenance letting Paulina down. She was his co-star and unnecessarily loyal friend. This was her production. She had proposed running it and Leon had forcibly persuaded her to ignore Rumpold’s unwarranted opinion and grant him Lysander’s role, against widespread whispers of opposition from others on the cast. Besides, Paulina was scary when angry. She’d tear him apart if he let her down. Furthermore, she was also the best friend of his girlfriend, Hermione. They’d both unfailingly given him far too much patience and support already, as well as a few necessary kicks up the kickables. They’d encouraged and cajoled him when he was pessimistic. They’d forced him to work when he was dossing. They’d both also uncomplainingly given him far too much of their own valuable revision and rehearsal time when he’d asked for help. They’d both be deeply disappointed, perhaps ashamed, if he flopped. Shaming them was far, far worse, even to Leon’s usually self-serving actor ego, than flopping.

His tangled blond hair splayed over the sheets squashed under his forehead. His blue eyes were open. The blurred words on the sheet directly below them merged into an indistinct grey blob. A jumbled blob of mangled words was all that he felt he had managed to create in his leaky memory after hours of desperate attempts to learn them. But he’d no choice. He’d have to cope with the pressure. He’d have to extract sense, artistic sense, from the blob. He lifted his head and wheezed again. Drinking a deep slug of Red Bull, he mumbled, “Come on Lysander mate, help me out,” and picked up the top sheet.