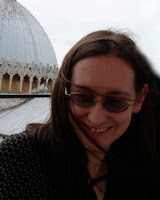 
Elizabeth Guizzetti loves to create. In her mind, she has the best job (or jobs) in the world. She gets an idea, runs with it until it leads her to generate whatever it is going to be. Her process begins with a big idea and her “end vision” for the idea.

Over the past decade, she has created the graphic novel series Faminelands and Lure and a comic book series Out for Souls& Cookies! Other Systems is her first published novel.

Guizzetti currently lives in Seattle with her husband and two dogs.

I begin by outlining the basic story. I write the first draft as quickly as possible, not allowing myself to edit anything. Then I go to the second draft and let things happen.

They do if I am forcing them to do something not in character.

In the second draft of Other Systems, Mark changed his whole subplot, which changed the last 2/3 of the novel. I was trying to get him to do something against his moral code and the writing was wrong somehow.
Mark yelled at me, “If I [did spoiler], it would be a violation of my Hippocratic oath and prove to Harden and Helen that I’m still a stupid kid with no impulse control.” So I asked him what he would do in that situation, his response: “I would be tempted but I would run away before making the mistake. WRITE ME OUT IF YOU MUST, BUT I WILL NOT DO THIS!” (FYI: This is the PG version of what he said, readers know the Alekoses all swear when they are upset.)

So I rewrote the scene literally letting him run. It changed nearly every major plot point of the next 2/3’s of the novel, but I think it makes for a stronger story.

Morning person. Or at least my dogs are morning people and have trained me well.

Actually in 2011, I was able to do my dream trip to the United Kingdom, and Ireland. I went to art museums in London, castles, ruins, and cathedrals in Scotland, Wales, England and Ireland. I hiked along the Ulster Way in Northern Ireland. It was wonderful.

Next, I would love to go to New Zealand or perhaps Greece, but it will be while.

Yes. Though distant is relative.

In Other Systems, Kipos is 94 light years away from Earth. Once Abby joins the planetary survey team, she goes to dozens of planets.

The Light Side of the Moon, the second book in the Other Systems series, focuses on someone who was too young to make the trip to Kipos. So it won’t go quite as far. It starts in Seattle, spans half-way around the Earth, and goes all the way to the moon!

Sometimes. I live in the middle of Seattle, so music is great to drown out the noise of the city. I also listen to something specific to help me capture the emotion of what I am going trying to create. For example I just listened to “Do You Feel The Way I Feel” by Belinda Carlisle in order to capture a character’s emotional state in The Light Side of the Moon. Then I write in quiet thinking about the emotions that song evoked in me.

I must edit in quiet.

Inspired by the NASA Kepler Missions, Other Systems is a hard science fiction examining the hardships and wonders of space exploration and planetary colonization. It’s a story of a young woman’s determination to have a better life when everything she believes is true turns out to be false. As it is set in a dystopian world, the antagonists of the novel are ignorance, fear, and poverty. Abby is enslaved, separated from her family, but she escapes and makes a better life for herself using only her intelligence.

I’ve learned so much in the past two years; it’s hard to sum it all up. By working with the two editors, my craft has improved. I learned about the pros and cons about having a book published by a small publisher first hand.

However, my biggest lesson has to do with being reviewed and the idea of success. Reviews are subjective and completely based upon the reader’s taste. My goal is to write something that challenged the reader and show them a glimpse of wonders of the universe. I wanted to write believable characters that use intelligence, not violence, to get out of their problems.

While of course, I want people to like it, whether they liked it or not is no longer the issue. Making sales is not an issue. However did I write a book where the reader can connect with the characters? Did they glimpse a tiny bit of the wonder in the universe? From my reviews so far, the answer was yes. That means Other Systems is a success.

Not really, simply because it was such a great learning experience, I would say for my next book, The Light Side of the Moon, I plan to start marketing much earlier that I did for Other Systems. And I can say I know what doesn't work for me.

I enjoy books and movies that take me to another world yet have relatable characters and some sort of realism, so the daily life of people inspires me. When I am working on a novel, I have some quotes to help steer my writing. These change for each title or series, so these are the ones specifically for the Other Systems series.

The first three are from Stephen King. “Alone. Yes, that's the key word, the most awful word in the English tongue. Murder doesn't hold a candle to it and hell is only a poor synonym.”

“I try to create sympathy for my characters, then turn the monsters loose.”

“We make up horrors to help us cope with the real ones.”

The next two are from StarTrek’s The Next Generation. StarTrek has the optimistic goal to explore the universe simply for scientific curiosity and knowledge while still admitting they’ve had a savage past.

In Hide and Q (StarTrek TNG 1.10)  Picard: Oh, I know Hamlet. And what he might say with irony I say with conviction. "What a piece of work is man! How noble in reason. How infinite in faculty. In form, in moving, how express and admirable. In action, how like an angel. In apprehension, how like a god."

Q: Surely you don't see your species like that, do you?

Q Who (StarTrek TNG 2.16) Q: If you can't take a little bloody nose, maybe you ought to go back home, and crawl under your bed. It's not safe out here! It's wondrous...with treasures to satiate desires both subtle and gross; but it's not for the timid.

Writing is hard work, so write what excites you. Believe in the story you want to tell. Not everyone is going to like your book, but no matter what happens if you stay true to yourself, you will be proud of it.

Blurb of your latest release

Without an influx of human DNA, the utopian colony on Kipos has eleven generations before it reaches failure. Earth is over ninety light years away. Time is short.

On the over-crowded Earth, many see opportunity in Kipos's need. After medical, intelligence, and physiological testing, Abby and her younger siblings, Jin and Orchid, are offered transportation. Along with 750,000 other strong immigrants, they leave the safety of their family with the expectation of good jobs and the opportunity for higher education.

While the Earthlings travel to the new planet in stasis, the Kiposi, terrified the savages will taint their paradise, pass a series of indenture and adoption laws in order to assimilate them.

Abby wakes up on Kipos, Jin cannot be found. Orchid is ripped from her arms as Abby is sold to a dull-eyed man with a sterilized wife. Indentured to breed, she is drugged and systematically coerced. To survive, Abby learns the differences in culture and language using the only thing that is truly hers on this new world: her analytical mind. In order to escape her captors, she joins a planetary survey team where she will discover yet another way of life.