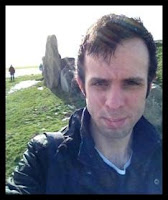 My name is Matthew Head and I'm a writer from Surrey. Well, I say from Surrey - I was born in Kent, moved to London for a bit and then moved out to Surrey to live with my partner Andrew. I was born in the eighties, raised in the nineties and then I was inspired in the noughties during my time at university where I studied Theology.

Theology is quite possibly the most fascinating subject in the world. Sounds boring I know, sounds like church and everyone knows that church is boring. But it's not like that at all. It's packed full of myths and monsters, gods and goddesses - mad, bad, sad ones alive in stories which rival many blockbuster movies in terms of how epic they are. It doesn't matter whether it's all real or not - it's the story that counts. Stories are beautiful because absolutely anything is possible within them. That's why I love writing because I love the idea of contributing to that and creating stories. Stories that will make you cry, make you laugh, make you scared. Because I think there is some magic in writing - that simple words have the power to make us feel and react so strongly to them.

When I'm not writing or doing my day job then I really enjoy going out and exploring new places. I love going somewhere I've never been before, especially if there's some history linked to the place. Old places are the best - the older the better. You just get this sense that so much has happened there, so many different people have come and gone and yet the place remains.

A few more random facts about me - my favourite pet is the humble goldfish, I love banana flavoured things but I strongly dislike bananas and the only real phobia I have is a phobia of frogs. Yeuch.

It’s actually a mix of both! I’m writing a series so I have the actual story arc planned out right down to the smallest detail. But as I write each “point” in the story I quite like having a degree of flexibility where if I feel the story heading off on a certain tangent I just let it flow rather than trying to contain it.

It can be tempting with some of them to just write loads about them and really put them centre stage – but I try and stop myself from letting that happen. Yes you want your protagonist to be in the spotlight and for your readers to have a real connection with them, but if you let them yak on too much it can become tiresome. The story stops being the story and it ends up just being a biography.

Oh gosh, what a question! I love food so much, it’s hard to choose! I guess I’d have to plump for macaroni cheese made with a really strong cheddar – yum!

I’d say night owl, but even then I’m not as much of a night owl as I used to be. When I do manage to drag myself out of bed early I enjoy having more time to do things but I rarely happens because I love my bed too much!

I’d love to do a cruise around the northern part of the world, bordering on the Arctic Circle, visiting remote islands and seeing the Northern Lights. That would be spectacular.

Not in this first book, no – it’s all (with the exception of a few scenes) set in jolly old England. But in later books there are some veryfar away places visited. That’s all I’m saying!

Yes, definitely. I normally listen to soundtracks from films or tv shows as you get a real sense of story through the music – which in turn helps me turn the music into a story.

Yes it’s a supernatural mystery/thriller called “The Chronicles of Darkness: The Box of Infernos” – it’s jam packed with epic thrills, chills, love, friendship and heartbreak. The protagonist, Isaac, is investigating a series of strange disappearances with his friends and before he knows what’s hit him he’s pulled into a disturbingly dark mystery that has consequences for the whole world! There’s plenty of twists and turns, and you’ll encounter terrifying demons, ghouls, ghosts and the monstrosity that lies within the titular Box of Infernos!

I’ve become a lot more confident in my own abilities, that’s for sure. When you start out you’re always nervous and quite timid – a bit intimidated by the industry. You think “can I do this?” and then as you go along and get on with it you think “actually, yes I can!” I’ve learnt to trust my gut too – there are a lot of “experts” out there who are queuing up to tell you how to do this or how to do that. It can be really off-putting and can make you doubt your decisions until you realize that just because they’ve written it down it doesn’t become gospel truth. Everyone’s just going off their own experience.

I’d have put more effort into getting my book out there to be reviewed. I’m quickly learning that reviews = sales.

I’d say a combination of my long time love and interest for the supernatural (I grew up on shows like Buffy) and also my own time at university and the sort of bond you make with people there. All that experience and interest has been poured into “The Chronicles of Darkness.”

As I said before – trust your gut. Read around, of course. Read people’s experiences, read what’s worked for different folks. But at the end of the day go with what you think will work for you. Don’t listen to anyone who says “well, if you do it like that you’ll fail.” I really believe that we’re masters of our own destinies – if you want something to happen then make it so!

Emotional, anxious, friendship. I say friendship because I’m very friend-driven, they mean the world to me. And emotional is the whole spectrum – happy right round to sad!

My favourite book isn’t actually a fiction book – it’s “The Writer’s Tale” by Russell T Davies, the man who brought Doctor Who back to our screens in 2005. It’s a fascinating read.

The Chronicles of Darkness: The Box of Infernos


In the south of England, in the city of Monks-Lantern, events are starting to unfold which have the potential to threaten all of creation. Isaac Jacobs is a young university student with a haunted past who has long been fighting the supernatural monsters of this world and now he fights them alongside his four friends; GabbiGurtpasha, Billie Stamford, Laura Henley and Ben Pokeley. What starts off as a disturbing but relatively low key investigation soon explodes into something much larger, darker and more fearsome than any of them could have imagined. Just what is behind the slow but steady disappearance of people from the city? Who is the much feared Imperator? What is the worst thing you can hope to see beneath a door in an empty building? How do you define a good man from a bad one? And what terror lies within the Box of Infernos? A plan which has been in motion for millenia is now coming to fruition and Isaac had better be ready as his life will never be the same again from now on.

“The Chronicles of Darkness: Prequels”

“The House With Two Front Doors”