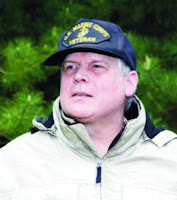 Keith C. Chase interacts with his readership on Facebook and will appear in person at locations in Western Massachusetts throughout the summer. Mr. Chase, a long-time military historian, and former Marine, was accepted by the elite Marine Security Guard Battalion in 1981. He guarded American Embassies in Cameroon, Africa, and Bonn, Germany. Keith left the Marines with an Honorable Discharge in 1989, having earned over forty decorations, promotions, and award certificates. Mr. Chase, a lover of nature, resides in a small community in Western Massachusetts. He is continually involved in several book projects and has recently begun collaborating on a project to bring Souvenirs to the big screen.


Thank you for your interest.

Most is a plan, 3 or 4 chapters, often I feel my story going off on its own,within reason of course.

Sometimes I will let them if it is logical.

You see, in a way it is their world and era that we are visiting.

We do not belong there.

They must stay there forever.

I'm joking, I hope I am not scaring you.

Mostly of the night world since a young teenager.

Oh yes! Very much. Even Heaven.

I love lots and lots of all sorts but never while writing.

Some music most certainly does influence my mind memory and soul.


Could you tell us a bit about your latest release?

The locations, war, slang, weather, weapons, gear, hopes and the uncertainty of the situation these soldiers are in.

Aachen was the first Third Reich city to fall under American Army siege.

The outcome was very serious for both sides!

Oh, and intense isolation, like being back in P.O.W. training.

I would have learned computers sooner.

A lifetime of books and movies!

The whole good against evil thing and of course Jesus!

Please do not disregard absolute fear of failure!

Look, I barely graduated, received no education benefits from honorable service in the Marines, (none of us did under carter).

I had no choice but to keep fighting, to keep learning anyway I could.

There could be no quitting, no surrender!

It was what I wanted!

It was my only chance in this world to succeed in my way.

Grateful to my new boss Allison, my agents Michael and Tamara;...Beyond what one could imagine!

Friends, please remember to learn to love fear and use it.

Do not let it hamper your creativity but indeed let it push you around if you start getting too lazy.

We only have just so much time.

FUN! Where do I begin friend?

The book, Souvenirs, is set in the cold October of 1944, as the American Army struggles to capture the German City of Aachen. The hero, Sergeant Richard Grant, struggles desperately to keep his six remaining squad members alive. Every moment of their lives contains a new vision of the horror of war. Grant and his men sincerely believe the act of collecting souvenirs from German corpses and POWs bestows luck, granting them another day of survival. The men suddenly realize their luck may well be borrowed time, payable in full. Their sanity is stretched to the breaking point as their sense of protection withers.

Escape From The Ardennes, historical fiction.