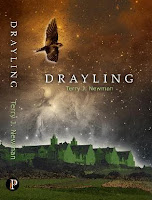 
The small district of Drayling, in Southern 25th Century Britain, is typical of communities throughout the country, and its citizens live in harmony and contentment.

Following the death of the head of the national government, however, there is a significant shift in approach - which forces a small group of ordinary people to conclude that they have no alternative but to take radical action to protect their way of life. This is their story.

Not wishing to spoil the read, suffice to say that this is a different kind of science fiction book - for the intelligent reader.

To quote from the back-cover synopsis, "Reality collides with fantasy and philosophy as they embark on a mission of suspense, danger, deceit and death - with far-reaching ramifications."


As it hadn't rained for a few days, the ground was dry and quite hard. This meant that progress was slow and not a little tiring. They established a rota of “two on and one off,” whereby they each worked for ten minutes and rested for five in every quarter of an hour.

They'd been toiling for over two hours when Stin, who was having his rest turn, suddenly hissed, “Stop digging!”

Hayden and Marius froze. Had they been discovered? They looked up at the silhouette of Stin against the sky.

In the still of the night, they could just detect a low, steady hum.

“What is it?” queried Marius.

“Do as I say, and don't ask questions,” demanded Stin, in a low and even voice. “Drop the tools and get out of the hole slowly and carefully. I‟ll explain it to you in a moment.”

The urgency in his voice was sufficient to make them do as he asked.

When they were standing beside the hole, he held out his IDS and whispered, “Look at this.”

The screen was flashing “IMMINENT DANGER.”

The author lives with his wife in Sussex (England). He is a member of English Heritage, The National Trust, Brighton & Hove Albion Supporters' Club and Mensa.
at July 13, 2013