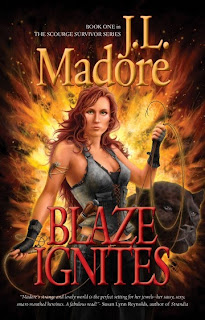 "Destiny my ass." Jade Glaster refuses to believe the Fates rule her life. Orphaned after an attack by Scourge soldiers, a young Jade vows never to be powerless again. Once grown and strong, wielding the affinities of fire and healing, Jade protects innocents as an enforcer for her world's elite policing agency—The Talon.

When an emissary mission to reinstate a race of exiled Elves brings Galan into her life, Jade finds herself overwhelmed by new passions, some welcome, some not. Although Galan's antiquated views on women offend her to her heated core, when the Scourge attack his family, she helps him navigate the outside worlds he knows nothing about—the magical Realm of the Fair and, stranger still . . . the modern streets of Toronto.

Through their sensually charged pursuit of justice, Jade discovers that when dealing with the Fates—destiny is never random.

Lexi and I saw the standoff escalating beyond the crush of half-naked, leather-clad bodies on the dance floor. The patrons of the tavern, human and not, ceased shimmying to the techno-rock of the house band and drew wands and daggers in every direction.

"Let us through people." Raising my palms I called my powers. "Castian, come to me." A surge of arcane energy lifted my hair as my affinity awoke. "Down!" I shielded Lexi and avoided the white-gold energy bolt zinging past our heads. It hit the mirrored wall over the bar, bursting into a shower of sparks and jagged shards.

A shot rang out. Shit.

Magic buzzed and crackled in the air like a bug-light in August. I threw out some heat to part the remaining sea of bodies. Ignoring the sneers of rubberneckers, we pushed through and my sister and I joined the altercation.

A scruffy, brute of a man sporting a bandana stood, gun poised, staring straight into the wand-tip of one of the Academy of Affinities' fifth-year wizardry students.

"Problem, gentlemen?" I asked, easing into their circle.

With shoulders rigid and wand steady, the student, Nash Blackpaw, focused straight ahead. "Jade, this asshole thinks he's dragging my friend back to the Modern Realm."

I assessed the native girl shielded behind his back. She looked shaken but unharmed.

Pushing down the urge to wipe the amused sneer off the bastard's face I tried to remain professional. "Jade is what friends and students call me. You can call me Blaze. That is my official nom de guerre."

I held up my wrist and revealed my Talon brand. Cold, sharp eyes narrowed on my copper skin as the trademark golden hawk of a Talon enforcer appeared. "Sir, you are armed with intent to do harm on Haven grounds. This entire mountain is a sanctuary. According to Fae law, the girl is welcome to claim refuge here."

"Screw the laws," he spat, shifting the business end of the gun toward me. "Fae laws force our race to live in the Modern Realm—force us to hide who we are as if we're worth less than those fucking humans. The gods won't care about one worthless runaway. Tell your boy here to lower his wand and we're gone."

Catching Lexi's eye, I glanced toward the girl and my sister dissolved into the crowd.

"Again, that would be no." The muzzle of the gun pointed at my chest at an almost point blank range. My skin tingled warm. I pushed back my temper. "I know how you must feel—"

"You know nothing," he snapped, spittle flying. "You are human."

With his full attention on me, I wove more persuasion into my words. "As a Talon enforcer, I ensure the laws of both realms are upheld. You smuggled a gun from the Modern Realm onto sanctuary grounds. There's no chance you're leaving with the girl. The Portal Gates are sealed for summer solstice and you have things to answer for. Your only option here is to lower your weapon."

My suggestion had the barrel wavering. He clutched the grip with both hands and stabilized it. His jaw clenched as his index finger tightened on the trigger. I gave another push of energy and when I thought I was at my limit, I pushed further. Perspiration beaded across his furrowed brow. I held on. Needles of pain ran through my jaw as I clenched my teeth. After another minute, the Glock clattered to the tavern floor.

My feet left the ground as his shoulder caught my cheek. Something solid connected with my ribs and I hit the dance floor in an awkward half-twist. My back connected with the wood plank right before my head bounced. I was still seeing white splotches bursting in front of my eyes when the brute's staggering weight lifted and two Were-lion bouncers took control.

One snatched the weapon and shoved it into the waistband of his jeans. His litter-mate grabbed the guy's thick arms and wrenched them back until I expected to hear the snap of bone. Rumbling like a storm cloud, the pair of Weres cable-tied the guy's hands and signaled to everyone that the show was over.

"And a good night was had by all." Lexi rolled her amethyst eyes and offered me a hand up. 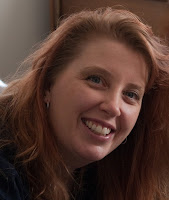 September 2009 marked the beginning of my journey with writing paranormal/fantasy romance novels. After spending a year hiatus in Panama with my family, I returned to Ontario relaxed and ready to let stories flow from my mind onto the page. The only problem was—I didn’t know a thing about the craft of writing.

Almost four years later, after dozens of workshops, reading hundreds of books, joining a writing community and two critique groups, I've won two writing scholarships and believe I've got a handle on what I’m trying to say and the voice with which I want to say it.

Currently, I am working on the five book Scourge Survivor Series as well as a darker, erotic/romance paranormal series currently called Watchers of the Grey.