Book Spotlight: The End of Athens by Anthony Karakai 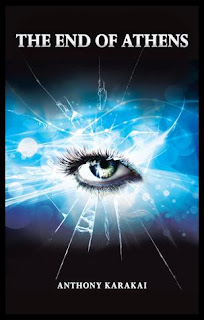 In the year 2091, humans have lost the ability to dream. After decades of financial and social depression, dreams and aspirations have become a recessive gene—an impossibility of the modern mind.

Greece is one of the worst social and economic disaster zones, and all hope of a better future has been lost. One young man, Nikos, discovers that he is not like everybody else—there is something different about him.

Believing that he may be going crazy, he soon discovers that he is the only person in Greece who has inherited the ability to dream. Time is running out as the government continues its tirade of corruption and suppression against the people, and Nikos must find a way to teach others how to dream so that once more society can free itself from the shackles of mental slavery. 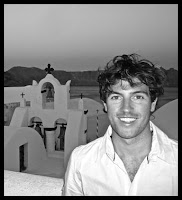 
Anthony Michael Karakai was born in Melbourne, Australia, and is a dual citizen of Hungary. Holding an International Business degree, he is also a qualified percussionist and music producer, having studied music extensively since the age of seven. Working in journalism, his work has been published in various magazines and websites. With an insatiable appetite for travel and an eagerness to explore off the beaten path, Karakai travels at every opportunity- his travels and ongoing commitment to exploring the world are what inspires him to write.

I looked into the face of death, and took his mask off. What was it that I was seeing? Stringent blue lights, creeping black shadows, and an entity as tall as myself. This wasn’t evil personified, this thing, this man, this sometimes boy, had a message. He mirrored my actions as I leant against the dark bluestone walls, in what would’ve been an alley if it were not for the enclosed, claustrophobic cube. His face was bare underneath the flowing black hood. We stared at each other, somewhat intently but more so with recognition. As he raised his right hand up towards my face, I found mine momentarily doing the same. Just as we were about to touch, as our hands were to feel the complexity of warm life and cold death, did this mirage disappear.

I find myself instantly in my bedroom, tired but awake, starting another day off the back of what I suspect is the beginning of the end.

As I make myself to work, I think constantly about these apparitional mirages and what it is I’m experiencing. I have no idea, I think I’m going crazy, and I wonder if I should tell somebody. This type of behaviour isn’t normal, as far as normalcy is concerned. I pay the young girl for my coffee- a long black, and saunter towards the entry of building Zero before walking the staircase. The staircase is long, it’s difficult to walk but I do this each morning under the misguided assumption that it will somehow keep me fit. As far as I know, since a desk job was invented the human body periled into a frivolous state of sugar, fat and general regression to what it was designed for in all those history books. We live longer, but for what, I’m not so sure.

After completing the ceremonious “hellos” and “good mornings”, I sit down in what can only be described as a pod and turn on the computer. The year is 2091, and I reside in Athens- the birthplace of democracy, the cradle of free thought and the place on Earth where the potential for civilisation to be civil all began. My name is Nikos, and I am 27 years old.

Contrary to belief all those decades ago, we are not driving hybrid car-aeroplanes and teleporting ourselves across the planet. Based on my grandfather’s journal, life is much the same but at a more efficient pace. Technology is the way of the past, present and future, but to say we have been taking quantum leaps is an unjustifiable hyperbolic lie. Things have changed, but they always do. Change is the only constant across time, so it should come as little surprise that the world we live in today is something inconceivable to my grandfather.

My grandfather was an important man in his time, at least according to me, but from what I read in history texts this was not so apparent. He kept a journal of his life, of the events he witnessed and passed it onto my father. My father passed it onto me, as I am interested in learning about the man I never knew through the only means available. It can be strange growing up with limited family, your whole life can seem like a mystery. So many questions beg to be answered, some may even weep if it were possible, and since the answers are devoid of a definitive solution, I find myself clinging to this journal as though it were the bible. To me, it is the bible. It’s my way of understanding one of many descendants who made my very existence possible. I’m intrigued by who he was, what he saw but more importantly, what he thought. These scriptures are a reflection of the times, which to me leave more questions than answers in my quest to understanding who I am in the world.

My day begins like everybody else’s. I catch public transport to work, I sit in a cubicle and for the better part of eight hours a day, I stare at a computer screen and exercise my fingertips. This is about as much exercise as anybody around here gets, and by the day’s end, we are exhausted. My life’s input exists inside this hard drive; I chat to colleagues on here, close business deals via a head set and generally have no need, nor desire, to come face-to-face with anybody I deal with. Technology has excelled and made our life simpler, faster, and more efficient. It has made business more effective, and productivity optimised. Essentially, I am a contactless human being inside a concrete sky rise who is paid to make certain people more money, in exchange for less than I make them. That hardly seems fair, but I guess it’s survival of the fittest in these tough times. The only real thing I have learnt about business to date is, if you want to swim with the sharks you better be ready to bite. It takes a certain individual to succeed at this level, and I refuse to take kindly to some of their false exteriors. Behind the media hounds and million-dollar smiles is a Great white shark in disguise. They know no limits, and funnily enough I respect them for not giving a damn.

Athens is a beautiful place with a historic presence throughout the ages. Thales of Miletus, Plato and Aristotle birthed a global school of thought in my own home city. If together, these three men could change the existence of life of Earth by simply thinking about it, then what was I capable of? What was the coffee girl capable of aside from mixing hot water with coffee beans? What was the man’s potential in the cubicle beside me, after he kicked the drinking habit? I believe that we are stuck in an era without purpose, a time capsule without significance and a period without cause. We are stuck, clogs in the machine that we call “living in society”. But this isn’t what I am concerned about, as much as my grandfather was. My main cause of concern is my psyche and these visions that appear every time I fall asleep. I don’t want to tell anyone for fear of being exiled, ridiculed or locked up. My days become harder having to deal with this, and I sincerely doubt anyone can truly understand what it is I’m going through.

I have a friend named David who I should probably confide in, but I’m hesitant even against the greatest of confidence. We play chess together on a fortnightly basis and drink tea. Our conversations are deep and meaningful, and not without merit. We are each trying to find our place in the world through a series of trial and error, but the more we try, the more error comes our way. In terms of our occupations, we are brilliant at what we do, but since when did that ever suffice for understanding life? There’s a reason we are here, and I plan on getting to the bottom of it.

As I exit building Zero each night, I can’t help but take note of the cold wind roaring through the city. These bright lights do little to illuminate the heart when the freezing chill penetrates the chest. It’s so cold nowadays, I’m surprised we don’t have the adequate clothing required to sustain a comfortable state. I pace the busy streets as cars pass by, as shadows canvas the city blocks and as music chases the direction of the midnight run. The streets are black, the atmosphere hectic and all in all it’s as chaotic out here as it is in my visions. I strangely feel a similar emotion from the moment I awake from these parallel worlds to what it is I feel when I’m walking the streets at night. The hottest day in the past forty years was twenty degrees, if that tells you anything about the climate. The world is a much colder place than it was during my grandfather’s time. It is darker, it is more sinister. If there is hope for anything, it is for all but nothing. The people do not smile, and strangers do not engage. At the bar, we drink in virtual silence minus the occasional exception where two people actually can strike up a worthwhile conversation. As professionals, we’re all exhausted and alcohol provides a remedial nightcap before tomorrow begins. This is life as we know it, devoid of all hopes, aspirations, and prayers for a better world.