And now, she can spontaneously set things on fire with her mind.

Well... perhaps “normal” was never in the cards for her. As she questions her own sanity and spirals out of control, a man appears on her doorstep and tells her that, like him, she’s a witch.

Pulled in all directions, her unbridled magic draws dangerous attention and Jade wonders if she’s made the worst mistake of her life by joining a coven, or if she’ll even live long enough to regret it. 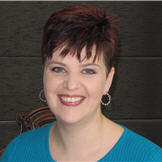 Margarita loves the art, creativity and romanticism of storytelling. Sometimes, however, the act of putting pen to paper proves challenging, elusive. She develops genuine, relatable characters which grow in the hearts of her readers. From that foundation, the stories flourish into a warm friend.

She enjoys pursuits which blur the lines between the analytical and creative sides of her brain. This includes her day job in electronic data management, where she uses her creativity to solve logical problems, and also her lessons learning to play the cello, where she finds beauty in the structure of music and the instrument. She believes there is a place for both logic and imagination to work together. When they do, the results are magical.

Margarita has a special spot in her heart for dogs and lives with three of them. It can be a little overwhelming but the quality snuggle time makes up for it.

Margarita lives in Calgary, Alberta with her family.

Paris knocked on Jade’s front door at six o’clock. He’d called during the day and found her busy with both Henri and Callie and fairly dismissive of needing any further handholding. Paris had managed to hold Jade’s attention long enough to say he’d be by at around six and he would check up on her magic then.

Jade had barely let him finish before she told him she was fine, she was being a good girl at her first day of school and that she’d see him tonight.

Paris was coming to realize she was a bit of a brat.

After no response at her door, he waited a minute and then knocked again. He waited another minute and then pressed the doorbell. He was about to ring again when the door finally swung open to the sound of Jade’s voice.

“I thought you said you weren’t done till six, what did you do, fly here?” “I made an effort to finish early,” Paris answered. “How was your day?” Jade stepped back out of the doorway and motioned for him to enter. “Fine,

good, you know.” She started walking toward the kitchen as he took his shoes off and placed them carefully by the front door. He stopped for a moment and looked around sharply.

“Are you doing magic in here right now?” he asked. He could feel magic in the air, a fine mixture of it, but nothing that he recalled from the book he gave her that morning.

“Just some little ones,” she answered over her shoulder.

“You really shouldn’t try anything I haven’t looked at. Without me present, it could be...”

His words trailed off as he turned the corner to the kitchen. Sitting on the table was the beginner spell-book he’d given her and another book he didn’t recognize, probably from the library. It was an advanced spell-casting ledger. Her cup of coffee sat beside the beginner books and he stopped dead in his tracks when he saw the spoon stirring the coffee under its own power. A flash of light caught the corner of his eye and he noticed a ball of flame the size of a basketball suspended over the sink. A pot of water sat on the counter and above the pot a fine swirl of mist was lazily swimming around in a double helix shape. There were also six rocks balanced impossibly in a stack, with a seventh rock hovering above them before setting itself down on the gravity defying pile. A miniature tornado in the corner of the kitchen tossed confetti up, down and around in an eddy of magicked air.

Jade had apparently been running all of them even as she left the room to speak with him at the door.

“That book you gave me seemed pretty boring, so I got another one from the library. Callie helped me pick it out,” she said casually as she sat back down at the table. The rocks wavered slightly but held their balance. The ball of fire drifted perilously close to her hair but seemed to stop outside flammable distance. Jade appeared not to notice.

Wordlessly, Paris pulled up a chair. The fire drifted closer to him and paused in front of him, almost like a pet sniffing out a new person in the room. Paris leaned back slightly, anticipating it would burn him.

“What?” Jade asked absentmindedly, as if Paris had spoken. She looked up from her book. “Oh.” She saw how close the flame was to him and without even saying a word the fireball drifted back toward her with a slight wave of her hand.

“You’re doing all of them at once,” Paris said, even though it was obvious.

“Yes, why? Oh, by the way, I need some help with something in the pantry.”

“What have you got in the pantry?” he asked warily, eyeing the closed door with trepidation. Jade stood and opened the pantry door. It looked perfectly normal. Jars and cans of food lined the shelves all in perfect order.

“Yes, looks like a pantry.” She agreed as she stuck her hand in and it disappeared up to her elbow. He pushed his chair back.

“Jesus!” Paris exclaimed as he stood up abruptly and made a move to grab her. She pulled her arm back out and shut the door with a shrug.

“I don’t know what that is. I can see all my stuff on the shelf but I tossed a few forks in there and they disappeared. Now watch this.”

She grabbed a can of vegetables from another cupboard and tossed it in. The can disappeared without a sound. She looked up at the ceiling.

“Shhh,” she hushed him. “Wait.” Two seconds later there was a loud thud from above. She looked at him. “It landed on the bedroom floor. Isn’t that bizarre?” Again she shrugged. “It’s been like that for the last hour. And I’m getting hungry.”

Jade sat back down and looked at him like a nine year-old waiting for permission to ride her bike. He took his seat slowly. Once again the fireball drifted in close to him, but she waved her hand and it moved back again. The rocks started to wobble.

“You really shouldn’t have started without me.”