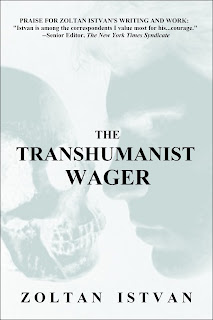 Set in the present day, the novel tells the story of transhumanist Jethro Knights and his unwavering quest for immortality via science and technology. Fighting against him are fanatical religious groups, economically depressed governments, and mystic Zoe Bach: a dazzling trauma surgeon and the love of his life, whose belief in spirituality and the afterlife is absolute.

Exiled from America and reeling from personal tragedy, Knights forges a new nation of willing scientists on the world's largest seasteading project, Transhumania. When the world declares war against the floating city, demanding an end to its renegade and godless transhuman experiments and ambitions, Knights strikes back, leaving the planet forever changed.