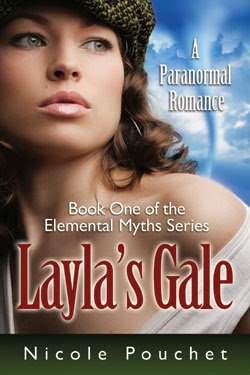 Meanwhile, director Sebastian Tawanti is steering his small D.C. theater company into the big-time with his Incan mythology-based play. The culmination of his life’s work, he won’t let anything stand in the way of his play's success--not his mother's objections, not the inappropriate heat he feels for Layla, and not even the mysterious, empathic symptoms he's experienced since meeting her.

Layla’s Gale is Book 1 of the four-book, paranormal romance / urban fantasy ELEMENTAL MYTHS romance series. Similar in subject matter, it is a lighter, more carefree read than Deborah Harness’ All Souls Trilogy. This paranormal romance series is sure to entice readers of Karen Marie Moning's Fever series and Marjorie M. Liu's Dirk and Steele series. ELEMENTAL MYTHS follows four couples as they bond together in steamy romance, supernatural powers, and predestined battle to save modern mankind from the mysterious demise of the vanished Incan Empire.

As Layla and Sebastian struggle with new love and burgeoning power, a sinister force unravels to fulfill an ancient prophecy. Will they learn the truth behind the Incan script in time to save their lives, the love they’re destined to share, and the future of humanity?

Still amazed to be an adult, Nicole Pouchet has managed to center her life around raising her two small sons and being true to her family (including husband and friends). She resides in Leesburg, Virginia where she co-owns a marketing agency. Happiest near the water, Nicole spends her free hours plotting her next escape, writing, and staring at the ceiling.

Join Nicole Pouchet online through email, Facebook, or Twitter to get the latest news on book release dates, and to browse images of the settings for the stories. Glorious pictures of Machu Picchu at sunrise, Washington, D.C. in the spring, and the ancient ruins of Lake Titicaca await.