Book Spotlight: The Breath of Aoles by Alan Spade 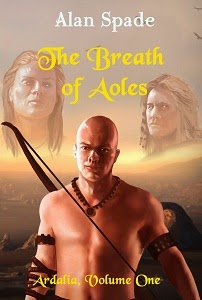 
Pelmen hates being a tanner, but that’s all he would ever be, thanks to the rigid caste system amongst his people, the hevelens. Then he meets Master Galn Boisencroix and his family.

The master carpenter opens up the world of archery to young Pelmen, who excels at his newfound skill. But Pelmen’s intractable father would have none of it, and tries to force Pelmen to stay in the tannery.

One day, however, Pelmen’s best friend and Master Galn's son, Teleg, disappears. Lured away by the prospect of untold riches through mining amberrock, the most precious substance in the world, Teleg finds himself a prisoner of the Nylevs, fierce fire-wielding worshippers of the god of destruction.Now Pelmen must leave all he knows behind, overcome his fears and travel across the land, in search of his childhood friend. Along the way, he will ally himself with strange and fantastic beings: a shaman who controls the Breath of Aoles, or the power of the wind, a krongos, a creature of the mineral realm who can become living rock, and a malian, adept at water magic.

The day had been trying, and Pelmen had only one urgent desire: to silence his grumbling stomach and lie down for as long as possible. When Laneth discreetly nodded and winked in his direction at the end of the meal, he pretended not to have seen it and went to the place where he had left his things, grimacing. His limbs were so stiff that simply moving them required considerable effort. He let himself fall down like an inert mass.

Paradoxically, sleep was slow in coming, which annoyed him. Had he not earned the rest after such a day? When he finally succeeded in forgetting his aches and slipped into relaxation, he was interrupted by someone shaking him by the shoulder.

“Eh?” he said, blinking. The stars were shining in the darkened heavens (several hours must had elapsed), and they framed the face of a young female. Although Pelmen was still disoriented, he recognized Laneth.

“What are you doing here?”

“What? Looking for you, of course. That’s what we agreed, isn’t it?”

He produced a sound that was both a yawn and a groan. “I don’t remember asking you to wake me up in the middle of the night.”

“Don’t pretend not to understand. I was going to teach you the art of wrestling, remember?”

“Did Xuven send you?” he grumbled.

Pelmen studied her, conscious of the fact that not far away, Ielun had just shifted in his sleep. He uttered a sigh and got to his feet, more because he did not want to wake his companions than for any other reason.

She took him to a place a hundred yards away, near a clump of fragrant plants.

“What are we going to do?” he muttered, stifling a further yawn. “I can hardly see you.”

“Exactly; the exercise is excellent. You’ll have to trust your sensations. Let your body find its points of equilibrium.”

Pelmen sighed again. At that moment, the only point of equilibrium in his body, with its aching limbs, was situated in the depths of his pallet.

She drew closer, and, moved by a defensive reflex, Pelmen braced his legs. They gripped one another by the shoulders. Pelmen drew upon unknown resources to resist the successive pressures exerted by the young female. Twice he lost his balance and she would have been able to throw him and dispose of him easily; instead, she tempered her effort each time.

Pelmen’s breathing became hoarse. Beyond the fatigue, he understood the key to the combat lay in knowing what his adversary’s next move would be. He therefore launched all his senses in search of the slightest clue. Laneth was skillful in feinting and hiding her intentions, so effectively that Pelmen found himself hard pressed again. It was at the moment when he was so exhausted he thought he couldn’t fight anymore that he finally anticipated one of her moves and blocked it.

Elated, he immediately tried to counter-attack, but she slipped away so that, turning his own momentum against him, she sent him tumbling to the ground. He got up, clenching his teeth, his legs unsteady. Scarcely taking the time to draw breath, he took hold of her once again.

A hand fell on his shoulder. “What are you doing?”

Alan Spade worked for eight years for the press, reviewing video games. In his youth, he acquainted himself with the classic French authors, while immersing himself in the works of H. P. Lovecraft, Isaac Asimov, J. R. R. Tolkien and Stephen King. That wide range of influences is reflected in his style, simultaneously approachable, visually evocative and imaginative.