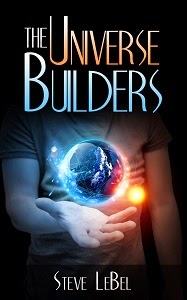 How can you stop a god from
destroying everything—
even if you are a god?

This humorous fantasy explores a world where Gods and Goddesses go to school, fall in love, and struggle with bad bosses and horrible bullies while designing complex universes.

Meet Bernie, God School’s latest graduate, described by his teachers as careless and lacking focus, yet lucky enough to land a job building a sun with three planets.

Meet Shemal, the boss who eats young gods for breakfast. When Shemal isn’t terrorizing Bernie, our young god has to deal with Billy. Think Satan is God’s adversary? Billy’s the Bully God with a grudge and a plan to sabotage Bernie’s universe with mysterious asteroids, volcanoes and more.

If you enjoy fantasy and science-fiction and the twilight of the gods, this book will challenge everything you know in this terrific page turner.

Excerpt from the book.

Have you ever wondered about the universe?  How was it created?  What is the purpose of it all?

Well, the answers may surprise you.

Actually, there are a lot of universes out there.  They come in every size and shape and flavor you can imagine.  And the answers to your questions are very different, depending on which universe you are in.

Some of those universes are amazing.  They are full of beautiful planets, intelligent races, technological marvels, and other wonders.  And some of them are not so amazing.  Each universe is created by a God, of course, as is required for such things.  But one of the inconvenient truths is that not all Gods are created equal.  Oh, they have the best teachers and the best education possible, of course.  And over the ages, the Gods have developed a decent work ethic and a strong desire to do the best they can.  But Gods are pretty much like everyone else.  They have their own share of overachievers and underachievers, motivated and unmotivated, talented and not-so-talented, and so on.  And that explains why some of the universes out there are not really up to professional standards.

This is a story about those Gods.  They live in The Town, on a planet called The World.  They call themselves The People.  And their primary occupation is building universes, which they call The Business.  You needn’t be much concerned about their lack of creativity in naming things.  They all live in the same town on the same planet.  And there isn’t anyone else in the God Business, so they don’t need a lot of fancy names to differentiate these things.

No one really remembers how they got in The Business.  They have been doing it as far back as anyone can recall.  And they will always be doing it.  It is just one of those things Gods do.  It isn’t like they can just quit The Business and go do something else.  And since it is the only thing they will ever do, one of the ways they make it fun is to see how well they can do it.

One of the main ways the Gods have fun, and their only real competition on The World, is the Annual Universe Awards.  This is when The Committee looks over the new universes to see if anyone has come up with something worthy of an award.  After all these millennia, there is an award for almost every category you can imagine.  The trick is to be better than the God who won that category last time.  So if you are going for the Most Beautiful Planet, and there have been forty-seven winners before you, each one more beautiful than the last, you have to be really exceptional if you want to become winner number forty-eight.  But the competition is everyone’s favorite event, and The People work very hard to outdo each other.  This is the best and fastest way to gain recognition for your work.

Not every God is cut out to be a Builder, of course.  Some of The People are better at other things.  This is good, because The Town needs cooks and librarians and plumbers and all manner of other professions as well.  In school, everyone has a chance to become a Builder, but as the classes keep getting harder and more challenging, there are more and more reasons to change your major to something else.

To help you understand about The World, we’ll take a look at an ordinary boy.  He isn’t the smartest, although he isn’t dumb.  He certainly didn’t distinguish himself in school, unless you count his reputation for being picked on more than most kids.  He had few friends, perhaps because he came from a broken home.  His mom worked hard to raise him the way he should be raised, but after the divorce, it was a struggle to make ends meet.  Our boy’s only claim to fame is his dad, who won three Universe Awards and become a major celebrity all over The World.

We take you to our young God at a special time in his life.  He has just finished school and is about to start his first job.  It is an exciting time to be sure…

Not when he writes.

Whimsy overcomes him at the word processor. Whimsy is at the core of his novel, The Universe Builders, which he tells with a unique balance of seriousness, humor, and imagination.

LeBel lives in Muskegon, Michigan with his wife Marge, and Mindy and Dexter, their cats.  When not writing, he is busy planning his next trip, cussing out the stock market, doing tech support for friends, or dreaming up new Universe Builder plots.