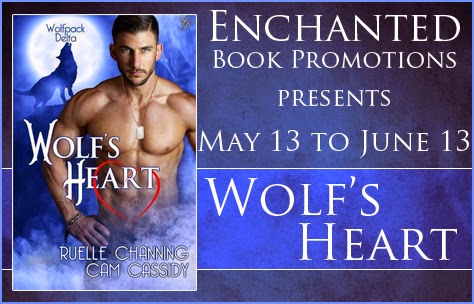 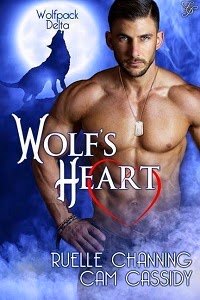 Wolfpack Delta gave Ryden Coulter’s life purpose after the attack that not only changed his life, but destroyed his only hope for happiness. While the woman he left behind is always on his mind, he knows that his new-found strength lies in the power of his wolf, not in his heart…or so he thinks.

Being born for the sole purpose of saving another’s life isn’t quite the way one imagines coming into the world, but Carlee O’Shannon knows no other reality. The one time she ever opened her heart, she lost it all. Vowing to never let another person hurt her that way again, she’s unprepared for Ryden to come back into her life.

Together again, out of necessity rather than desire, Ryden and Carlee will be forced to fight not only for their lives, but the lives of Ryden’s unit. Secrets and danger lurk beneath the surface, and it will take more than the strength of a lone wolf and the woman he loves to fight their way out.

Opening the wide bay doors, Ryden dropped his bag just inside and walked to the covered car, removing the tarp and tossing it into the back corner of the room. He paid the owner of the storage facility well to make sure the sleek beauty was always gassed up, and running at peak performance so that whenever Ryden was back home, he could just get in and drive.

Running his fingers across the glass-like surface, he appreciated yet again the beauty of the car. Eagerly, he grabbed the key from inside the door, tossed his bags in the back and started the classic car, and immediately heard the rumble of American muscle under the hood.

A broad smile spread across Ryden’s face as he felt the steady vibration of the car beneath him. He put it in drive and left the bay without even bothering to close and lock the door. There was nothing else in the bay, so it didn’t matter. All Ryden owned was the car and the few personal belongings, meager as they were, tossed in the back seat.

As he drove out of the city, making his way north on I-95 for the forty-five minute drive to Baltimore, his thoughts once again turned to his past and what he’d had to leave behind. Too many memories he wished he could forget, but knew would be a part of him for the rest of his life, a life that could turn out to be much longer than that of the average man driving down the interstate alongside him.

Had it not been for two men in particular who helped pull him back from the brink and put him on the right path at the age of sixteen, Ryden wondered how much worse it could have been. Now, many years later and on his way to see those two very same men, both retired and living the peaceful life, he hoped they were proud of the man that he had become.

As an adult, Cam is married and the mother of three ornery children who keep her on her toes.  The cup of coffee in her hand is a trademark.   She works full time in the medical field.  In her spare time,  she spends every minute reading and writing.  Watching her children ride horses, dirt bikes with a notebook in hand to never miss jotting down that next all important story idea.

All of the "hard work" reading and writing sitting beside the fire drinking a glass of wine.  Or was it between loads of laundry, recently paid off with her first publication.

Ruelle Channing is a writer of Paranormal Romance. She grew up in a small North Carolina community with books as her best friend. Often as a child, she was scolded for propping up her book to read while she did her chores, even while her mother encouraged the interest. Her father was illiterate, but never let that keep him from learning. Most of the librarians at both her school and local library knew her by name as she was a frequent visitor there. After graduation from high school, Ruelle worked in a sewing factory. She married at age 21 and had the first of three daughters two years later. Her girls have also inherited the love of reading. As stay at home mom for 17 years, Ruelle still wondered what she wanted to be when she "grew up". Having lived in books all her life, as an adult it has been her dream to create a world in which she would be proud to have others become entrance in. Her recent works include the Wolfpack Delta Series, which was written with friend and co-author, Cam Cassidy, and she has several other works in progress.