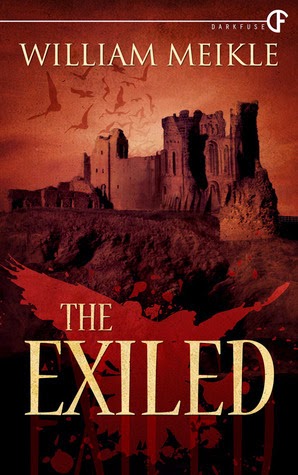 When several young girls are abducted from various locations in Edinburgh, Detective John Granger and his brother Alan, a reporter, investigate the cases from different directions. The abductor is cunning, always one step ahead, and the only clue he leaves behind at each scene are the brutalized corpses of black swans.

When the brothers' investigations finally converge at a farmhouse in Central Scotland, they catch a glimpse of where the girls have been taken, a place both far away yet close enough to touch. A land known throughout Scottish history with many names: Faerie, Elfheim, and the Astral Plane. It is a place of legend and horror, a myth. But the brothers soon discover it's real, and, to catch the abductor, they will have to cross over themselves.

To catch a killer, John and Alan Granger will have to battle the Cobbe, a strange and enigmatic creature that guards the realm, a creature of horrific power that demands a heavy price for entry into its world. The fate of both realms hangs in the balance…and time is running out...

Originally, fairy tales were not aimed at children and in the Exiled, William Meikle has written a fairy tale/dark fantasy that harkens back to those early predecessors.

John Grainger is a detective in Edinburgh, estranged from his brother, Alan, a journalist. Both of them collide when little girls are being abducted in broad daylight, where no one has seen a thing and the only clue is the mutilated bodies of black swans, each with their wings removed.

John wants to catch the culprit, while Alan is looking for a big scoop and they each follow different leads and end up at the same derelict farmhouse. But that isn't the only thing they have in common, both Alan and John have the ability to see another world and it is there that the girls have been taken.

But who is taking these girls here and why?

Part fantasy, part detective story, this book hooked me from the very first page and didn't let go until the last page was turned. Like any book a story will stand or fall on its characters and the characterisation here was spot on. I loved both Alan and John. Both of them had their flaws, which made them more realistic, but both had noble hearts and wanted to do the right thing, even if it meant danger for themselves.

Edinburgh comes to life, from the gritty, run-down block of flats where the first girl was abducted, to the more genteel old town and castle. You can imagine yourself there, and also in the other world of faerie which is well-described too. There's just enough description to set the scene, and the book moves along at a break-neck speed. The tension just keeps mounting and mounting on both sides of the veil.

My only niggle with this one, and it is a niggle, is that the book is set almost entirely in Scotland and the other realm, yet we have the characters doing things like getting items out of the trunk of the car, looking under the hood or driving SUVs. The Americanisms jarred me out of the story somewhat, and it's such a shame as this is not the only British set book I've read where this happens. The author writes the dialogue with Scottish overtones, it just seems a pity that the Americanisms crept in for the narrative part.

A great read if you enjoy your fairy tales and dark fantasy.