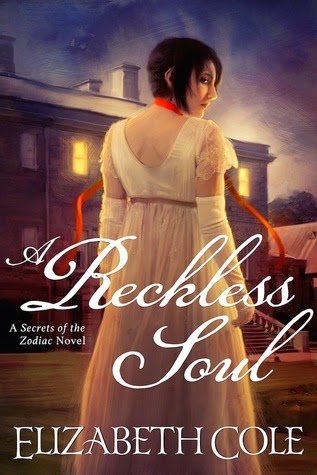 
The second novel in the Secrets of the Zodiac, a series that blends romantic suspense with the rich background of the Regency period.

A seductive agent, a disillusioned lord, and a web of deceit only they can untangle...

Sophie Bertrand is skilled in acting, espionage, and the subtle art of seduction. An independent spirit, she fought her way from rough streets to the top secret circle of spies known as the Zodiac. Her newest assignment is one of her most delicate yet: hunt down a traitor within Britain's own government. But there's a catch...this time she can't work alone.

Bruce Allander has a title, honor, wealth...but he'd trade it all to restore his family. The Zodiac gives him a chance for justice in a world that's already taken too much from him. Now he finds himself close to this captivating Frenchwoman--possibly too close. Sophie defies all his expectations, yet in her he senses a kindred soul.

Passion draws the two together, but a web of betrayals threatens to tear them apart. To survive, they have to trust each other. They have to be a little reckless...

What do you get if you cross James Bond with Jane Austen? You wouldn't be far wrong with this book by Elizabeth Cole.

Sophie Betrand, French by birth, has learned to survive on her wits. With nowhere to go after the death of her mother at the guillotine, Sophie spent a lot of time on the streets just trying to survive and has learned a hard lesson: you can't trust anyone. Now in England, she is an actress by trade, but is now also an agent of Zodiac which deals in threats to the British Crown.

Bruce Allander is a nobleman who is more likely to be found helping his workers in the fields than gallivanting around London to attend balls, gambling dens or whorehouses. He too is an agent of Zodica, although he and Sophie usually work alone.

For their next assignment, the two of them are to work together and pretend to be a married couple. Neither of them are happy about it and even less so when it was revealed that there may be a mole within Zodiac itself, seeling secrets to the French.

Could one of them be the mole? And who can they trust when the can't even trust each other?

This was a wonderful, romantic adventure. Yes, it's a regency romance, but there are no shy wallflowers here waiting to be asked to dance. Sophie goes after what she wants and she is a very feisty and brave heroine.

I took a bit longer to warm to Bruce, at first he seemed very remote and aloof, but as the story progresses you learn more about him and his past and can see why he finds it hard to trust, as does Sophie.

The love scenes were sensual and tasteful, without being overly explicit. It was more about the emotional connection the characters made than the physical.

Their assignment is fraught with danger at every turn and they gradually let their guard down around each other, but that's when things start going very wrong.

You are breathless with anticipation wondering if they can ever get out of these predicaments and get a happily ever after that they both deserve.

My only niggle was the American spelling in an English-set book, but after a while I didn't care, as I was too keen to see what happened next to our two leads.

Filled with espionage, romance and a rollicking adventure of a story, it's a fantastic read.

Elizabeth Cole is an author of both historical and contemporary romance. Previously, she worked in bookshops, libraries, and archives…anywhere there were books to be read and cared for. Now she can be found hanging around museums, coffeeshops, and (occasionally) graveyards. In addition to her sweet Regency novellas, Elizabeth is currently writing the Secrets of the Zodiac, a series of romantic spy thrillers also set in the Regency period. Elizabeth loves hearing from readers. Connect with her at elizabethcole.com