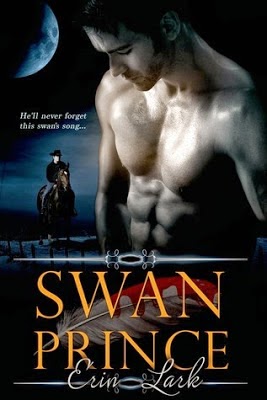 Trapped between his royal heritage and swan shifter status, Oliver doesn't pay close attention during his flock's winter migration, and gets caught in the crosshairs of a trigger-happy hunter.

Careening toward the ground with no place to go, Oliver submits to his human form. As his swan's feathers recede, he seeks shelter in an old barn.

Bastion's spent the better part of his adult life caring for a bunch of bullheaded stallions, but this is the first time he's ever found a naked and gorgeous man in one of his stalls. When he asks the man his name, he doesn't get a reply. Without a wallet or a voice to tell him who this stranger is, Bastion takes Oliver in, clothes him and tends to a mysterious wound.

Oliver has nowhere else to go. Bastion is in a bind after firing a farmhand who would much rather call in sick than do his job. When passion flares, can Bastion and Oliver overcome their differences, or will this swan prince fly south?

I must admit that shifter tales aren't my usual thing and since I have a dread fear of dogs, anything with werewolves I avoid like the plague. But growing up in Ireland, there are quite a few fairy tales centred on swans, such as The Children of Lir, so when I read the blurb of this one, I thought I would give it a try. And I am so glad I did.

Oliver is the swan prince of the title, living half his life as human, half as a swan, usually six months as each. But on his winter migration, he gets separated from his flock and is attacked by a hunter who clips his wings. Oliver knows the wound is bad and would likely kill him as a swan, but he might be able to tolerate it better as a human and he makes a rapid shift to his human form. Such a drastic change leaves him mute, wounded and naked in the rapidly falling snow, so he seeks shelter in a nearby barn.

Bastion owns the barn, and raises and keeps horses for clients, anything that will help pay the bills. He is shocked to discover a handsome, naked man in one of the stalls, with what seems to be a gunshot wound in his shoulder. Who is this man and what is he doing in Bastion's barn?

This was a sweet, passionate fairy tale romance that was low on the angst, but there is some concerning whether or not Oliver and Bastion can actually become a permanent partnership. Oliver is the prince of his flock, and the rest of them can only shift if their prince is with them.

There are a couple of love scenes in the book, both of them scorching hot and fitting well within the story, they flow as part of the narrative. The story is told half from Oliver's point of view and half from Bastion's, so you get to know each other's feelings. They are both in love, no doubt about that. Both are sympathetic characters that you can relate do and you hope that they can get their happily ever after.

A wonderful read if you are looking for something low on the angst scale. I think personally I would have liked a little bit more angst, perhaps something more about the hunter who attacked Oliver, but all in all I very much enjoyed the book.