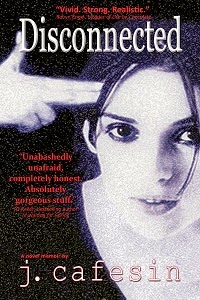 Ever drank too much, ate too much, indulged in excess? Ever fall for someone you knew you shouldn't?

Rachel was an artist, an obsessive, straddling the line of addiction. She sought what most women did—to be successful, married and in love, have healthy kids. It was hard enough attracting a man when she wasn't heroin thin and perfectly chic like most L.A. women, sparkly but not too bright, as her mother insisted females need be. But in the 1990s, finding a man looking for an equal partner, wanting a woman beside him instead of behind him, seemed the impossible dream.

Then along came Lee…

Disconnected is an L.A. story, an addicting contemporary romance that never should have been, and like the city itself embodies a very sharp edge.

I wasn’t listening to my intuition when I met Lee, one year earlier, almost to the day. Terrified of a life alone and childless, of being nothing, to anyone, ever, I could barely hear my inner voice beyond my internal clock, and the ever-present media insisting yet to be married women over 30 were more likely to get struck by lightning than find their knight. I finally succumbed to running a personal ad—the new hip, slick and trendy way to connect in L.A. Friends insisted finding Mr Right was a numbers games. An ad was a good way to meet men seeking more than getting laid, and looking to date women, which you never can tell in line at the market these days.

Five bucks a pop granted access to leave a message on the voice mail that came with personal ads. I called most everyone back. It was only right since they were investing in me. Lee’s message came days after everyone else. Deep, resonant voice, he said I was the only ad he responded to, sparked by my words, but the rest of his message sounded like he was reading from the same script as the twenty guys before him. Thirty-something, athletic, successful entrepreneur, ‘at a great space in his life.’ All he wanted (not ‘needed’—’wanted’ makes one better adjusted) was someone to share his wonderful life with. My intuition bridled. If his life was so fulfilling, why the hell was he answering personal ads at $5 a crack?

Personally, I was lonely. Really lonely. I’d spent a lifetime on the outside looking in.

I wasn’t all that excited about talking to Lee. The first several call backs to other respondents, and the few subsequent meetings, my heart and mind initially raced with hope. Twenty men down, and my intuition all but dismissed the possibility Lee could be Mr. Right by his message alone.

“What are you doing right now?” Lee asked over the phone after exchanging five minutes of standard pleasantries and stats. His question felt invasive, verging on lewd.

“Writing. What are you doing?”

“Writing what?” He kept the focus on me.

“Nothing. Playing with prose, just screwing around.”

“Must be fun, screwing around in your head.” He paused, and laughed. “I envy creative people, I mean.”

“Imagination as an endless source of self-contained amusement,” he chuckled, almost knowingly. “I like it.” He paused. “So, tell me more about being Rachel.”

I smiled again, knowing his angle. The main concern of women when blind dating is that the guy’s a psycho-killer. Guys want to know if the woman is fat.

“I love racquetball! Started playing in high school. Kind of gave it up after college, but I’d love to get back into it. Great game. Quick. Focused. Rather brutish, though. It ain’t exactly tennis.”

“It’s definitely not a popular sport among women. Finding consistent partners is a bitch, especially who aren’t out for blood, since I mostly play with guys.”

“Are you one of those women only satisfied competing with men?”

“I play for the calorie burn.” Racquetball was my only healthy fix over bouts with bulimia and speed, or starving myself chasing thin. “And I prefer not to play for points, since stopping for serves isn’t as good a workout. Are you like most guys whose manhood hinges on winning?”

“Touche.” Lee laughed. “I’ll play you. Anytime. And we don’t have to keep score. I can probably give you a workout, and I sure could use one.” And then I heard the unmistakable sound of him sucking on a joint.

“What are you doing right now?”

“Are you getting high?”

“Would it matter if I was?”

I should have hung up right then, said thanks for the chat and bye. But I didn’t. “I guess not.” I lied.

“Good,” he chuckled. “Well, you seem normal enough. Intriguing, even. Why is it you’re still single if you don’t want to be?”

I heard him hit the joint again and felt the draw of desire, that part of my brain that craved escape from fear and want, and the weight of my ordinary life. “My mother tells me I’m too…much. My sister would say I want too much.” I matched his directness with purpose but suddenly felt exposed with my confession. “What about you. Why are you still single?”

“I’m not. But we’ve already filed for divorce.”