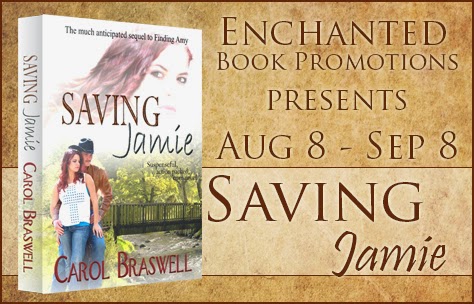 Do you plan everything or just let the story flow?
That is an interesting question. I have learned, after writing three books, that I like to plan the story first. Up until now I have run by the seat of my pants and encountered the dreaded 'saggy middle'. My awesome critique partner has been trying to get me to outline the story first. In the past I never knew which way the story would go and with an outline I can deviate in any direction the characters tell me to. I like having the story laid out first. So, now I'm a planner. That is until the next story.

Do your characters ever want to take over the story?
Absolutely. In my first book, I told the story and it is a complete flop. The story is there but I didn't listen to the character. All of the characters direct the story. Sometime we argue about the direction but they always win. Who knows their story better than they do?

What is your favorite food?
I am crazy about creamy anything. I love Italian and Cajun. My favorite Italian meal is shrimp Alfredo and I love chicken gumbo. I love to cook and if I can get fresh shrimp I'll cook shrimp Creole. But my specialty is cakes and bread puddings. Thanks to a past co-worker I make an awesome white chocolate bread pudding.

Are you a morning person or a night owl?
Most definitely a night owl. My creativity hits me around ten in the evening and I have been known to write until dawn. I guess it has something to do with the quite, dark night that makes me want to write. But no matter what time I go to bed, I can't sleep past eight in the morning. I am subject to take an hour nap now and then.

Where do you dream of traveling to and why?
I want to go to Italy. I think Italian men are so sexy and I love the food. There is so much history and to walk among the ruins of the coliseum would be a dream come true. I don't read or write historical but I love to study it. My wonderful hubby and I travel around the U.S. and have been out of the country a few times and so far the people are so warm and friendly. I just think Italy would be so much fun. I might want to move there.

Do distant places feature in your books?
We spent two weeks in Glacier National Park one summer and Finding Amy starts in and around the area. My first book, which is being rewritten, is centered around South America and Mexico. We are planning a trip to Maine and I'm sure there will be a book waiting there for me to write.

Do you listen to music while writing?
That depends. If I am on my laptop I am in front of the television. It is usually turned down low. If I'm at my desk upstairs, there is music playing. The music I listen to depends on the scenes I'm writing. I have an instrumental tape with rain and thunder in the background that sets my creative juices flowing. I am a die-hard country music fan.

Could you tell us a bit about your latest release?
Saving Jamie is about the stubborn identical twin of Amy Summers. She has no basic skills, married right out of high school, has a little girl who is four, and is trying to stay one step ahead of a powerful Colombian drug lord who wants the money her ex-husband stole. Jamie wants it, too. What she goes through to get the money gets her in hot water at every turn. It doesn't help that she has the hots for the FBI agent, Rex Garrett, who is trying to keep her safe.

What have you learned about writing and publishing since you first started?
That the stories are the easy part. Putting them on paper, piece of cake and getting a publisher wasn't too hard. In my naive mind I just thought all I had to do was write the stories. Wrong. There is business planning, marketing, promotions, acquiring a fan base, finding beta readers, editors, and social media, to name a few. All areas I was unfamiliar with and had to learn. I'm still learning and I'm sure as soon as I get it down, the rules will change.

Is there anything you would do differently?
Read and attend classes on the craft before ever starting the first story. Some talented writers have the ability to write a best seller on their first attempt but most of us don't. I would absorb everything I could. That still might not get me a best seller but I won't stop trying.

Who, or what, if anything has influenced your writing?
Liliana Hart got the wheels rolling and the Indie Revolution keeps them turning. There is so much opportunity for writers now that wasn't available a few years ago and if you don't try, you will miss out.

Anything you would say to those just starting out in the craft?
Write the best book you can write. I have never met a successful author who wasn't happy to give advice and tips. Listen to them. They have been where we are trying to go and know what to expect.

What are three words that describe you?
Motivated, determined, and happy.

Blurb of your latest release or coming soon book
The only thing standing between the cartel who is hunting her and Jamie is FBI agent Rex Garrett, but he can’t protect her when she disobeys orders. When a dead body turns up and evidence places Jamie at the scene she becomes the number one suspect. Will he have to arrest the woman he’s come to care about or will he find her dead?

Jamie Kenner is abducted and barely escapes with her life, but a head injury leaves what memory she has almost useless. With her head exploding in pain and no memory of why she finds help with a reclusive, yet kindly old rancher, something isn’t right. Fear haunts her. A secret is locked inside her head and someone is willing to kill for it. Her secret can get her killed!

The only thing standing between Jamie and the Cartel is FBI agent Rex Garret, but he can’t protect her when she disobeys orders. When a dead body turns up and evidence places Jamie at the scene she becomes the number one suspect. Will he have to arrest the woman he’s come to care about or will he find her dead?

Can he save her this time?

Jamie Kenner barely escapes abduction alive, but at what cost? A traumatic head injury leaves what little memory she has left almost useless. An unlikely friendship with a reclusive, but kind rancher eases her pain and frustration. Yet something isn’t right. Fear haunted her. A secret is locked inside her head, dancing just out of reach…a secret someone is willing to kill for.

Taking several deep breaths, she shut her eyes and wiped her wet hands on her dripping wet designer jeans. Bending over, she scratched the wet ground for the special black rock she buried a couple of years ago. “Damn.” She dug her fingers into the mud until the rock appeared and another nail cracked. It wasn’t anything that couldn’t be fixed but it ticked her off. She shouldn’t have to do this but she didn’t trust anyone else.

Her fingers gripped the key and she stood to unlock the gate. Her finger’s shook as she tried to fit the key in the small hole. She sensed someone behind her just before a hairy arm snaked around her neck. A gruff voice whispered in her ear, “If you scream, I’ll slit your throat.”

The sharp knife pierced the skin on her neck again and another man stepped in front of her and grinned, flashing two gold teeth. He placed duct tape over her mouth, snuffing out the scream that rose in her throat. Her arms were forced back, fastened with zip ties, and the keys to the house and gate were ripped from her hand. Jamie’s heart drummed heavily in her ears. She wanted to run but her legs had turned to rubber.  She heard the gate click closed and the two men drug her around the pool to the back door of her old home.

“Oh, crap,” she thought. What the hell was going on? Who were they?

Carol Braswell has been writing since 1994. She took it seriously three years ago when a newspaper story caught her eye and Finding Amy was born. But Amy had an identical twin and her story had to be told as well. Saving Jamie dictated her story, Carol listened and Jamie’s adventure came to life.

“Several beta readers told me they didn’t like Jamie in the first book. That’s exactly how I wanted her to come across. But I had to redeem her in Saving Jamie. My editor said I had.”

Mrs. Braswell says she writes what she loves to read. That is a lot of suspense and a little romance thrown in to keep the emotions flowing. Her page turners keep you on the edge wondering just what will happen next. And you never have to wait long for a hunt and capture or a steamy roll in the sheets. Her books are loaded with both.

At present Mrs. Braswell is working on three books and plans to release two more after re-writes. “It is a daunting task, to say the least, but will be well worth the effort.”

She lives in east Texas with her hero husband who can fix anything and three very spoiled Maltese. She says her home was built for comfort and tranquility. Hubby built her a pergola where she escapes to writes.