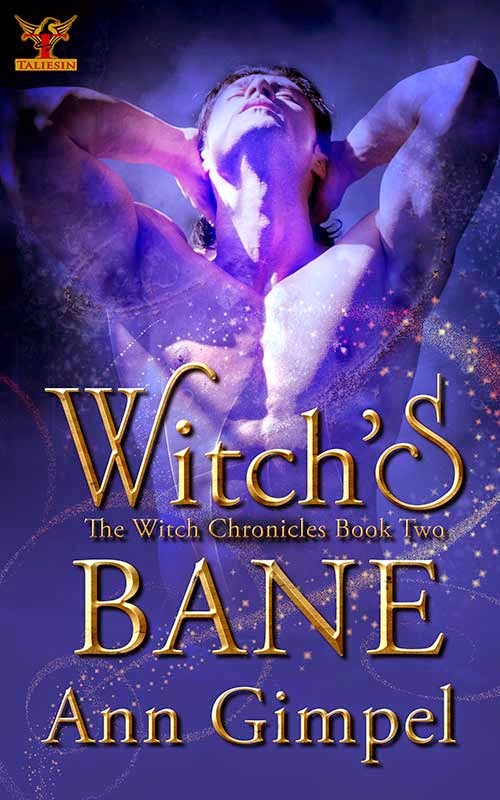 Two stubborn people—a witch and a mage—come together with a fierceness borne of desperation. Can passion trump their intense need for independence? Will they live long enough to find out?

Roz, Jenna, and Colleen are the last of the demon-stalking witches. So far, they’ve escaped disaster, but their luck is running low. When demons strike in the midst of Colleen’s wedding, Roz launches desperate measures because she and her sister witches are Earth’s only hedge against being overrun by Hell’s minions. As she shape-shifts to keep one step ahead of the demons, at least it takes her mind off her other problems. Personal ones. She burned through a couple of marriages with a string of loser men before, after, and in between. Though she wants to be happy for Colleen, the jealousy bug bit deep and hasn’t let go.

In Roz’s secret heart she’s attracted to Ronin, one of the Daoine Sidhe. He’s so profanely beautiful she can barely breathe around him, but he’s also headstrong and arrogant. Not good partner material, she tells herself, unless she wants to end up dusting her heart off one more time.

Ronin set his sights on Roz when she was at his home in the U.K. for a strategy meeting and he can’t get her out of his mind. Unfortunately, she’s so prickly getting close to her requires scheming. He casts an enchantment to lure her at Colleen’s wedding, but she senses the spell and rebuffs him.

Roz is used to calling the shots. So is Ronin. Sparks fly. Tempers run hot, right along with an attraction too strong to be denied. Roz and Ronin come together with a fierceness borne of desperation, but demons are determined to rid themselves of the witches for good, no matter what it takes.

Ronin Redstone unwound his arm from Roz and gripped his hands together in his lap to lessen the temptation to touch her again. Where he figured most of the guests were anxious to see the bride, he’d been interested in Roz. Probably too interested since he’d bounced to his feet the moment she entered the room and had even spun the mildest of spells to coerce her to sit near him. He pressed his lips into a flat line as he wrestled with his thoughts. Ever since he’d met the tall, imposing witch at his home in northern England a couple of weeks before, he’d been able to think of little else. She even entered his dreams with her silky black hair, pronounced cheekbones, and hawk-like nose. In those dreams, she was naked, her bronze skin glimmering in moonlight.

Her heady scent, pine forests and jasmine, tickled his nostrils and made him wonder what she’d feel like in his arms. Once he kicked the door open to that slippery slope, his cock sprang to life, clearly eager to find out. He tried to clip his libido before things whirled out of control and she noticed his arousal, but his cock wasn’t in the mood for negotiation—or retreat. He wove the tiniest don’t look here spell and draped his lower body with it.

In years past, he’d simply have created a love charm, imbued it with compulsion, and bedded the woman. That probably wasn’t a good idea, though. Roz would sense his magic, be outraged he tried to coerce her, and that would be the last he ever saw of the striking witch. Never mind she had good reason to not want much to do with him since he’d been one of the key players two hundred years ago who’d suggested foisting demon stalking onto the witches. He tightened his jaw muscles. Who could have guessed his little machination to get his kin out from under a highly unpleasant task would nearly be the death of the few witches who’d inherited the power through a magical version of gene splicing? Of course, he’d also been the one to send Duncan to fetch one of the witches to quell a demon uprising in the U.K. last month. That was how they’d discovered only three of the special witches remained…

No wonder she’s not overly fond of me. Ronin grimaced, not liking the truth in his thoughts. An inner voice huffed, reminding him it wasn’t his fault the witches in question hadn’t produced more offspring, but he shushed it.

Surely I can at least charm Roz out of that sour expression on her face.

He forced his breathing into a regular pattern and glanced toward Duncan and Colleen at the front of the room. The resident witch had completed her part of the ceremony and Titania was speaking in Gaelic so old he had trouble following it. The Sidhe binding ceremony lasted at least half an hour, so he let his thoughts drift. Anywhere but to his cock, which still throbbed uncomfortably.

As de facto leader for the Sidhe, a post he held more because no one else wanted it than because of any special skills on his part, he sensed they stood at the edge of a cataclysmic event. Abbadon and his henchmen, the Irichna demons, had grown appallingly strong. Capturing them one at a time and shepherding them to the Ninth Circle of Hell where they were trapped for all eternity wasn’t a workable solution anymore. There were too many of them, and maybe not enough space in the bottom of Hell.

Because he was afraid of a firm answer regarding Hell’s demon storage capacity, he hadn’t asked Titania, though surely she’d know. If they couldn’t dump Irichna behind the Ninth Circle’s gate, he had no idea what they’d do with them. And if Abbadon consolidated his full power, Earth would be laid waste. Ronin clamped his jaws together. Apocalypse didn’t come close to describing what would happen if Abbadon were freed from protecting his demons and could concentrate on taking over Earth.

In addition to not inquiring too closely about the Irichna, I also haven’t asked about Oberon. Ronin grimaced again. If the King of Faerie were truly so tired of immortality he’d let himself fade into the Dreaming, Ronin didn’t want to know about that, either.

When did I turn into such a craven I avoid unpleasant answers?

Even though he wasn’t expecting one, a response popped up anyway. He’d loved a human woman once, but she’d died bearing their son, who’d perished right along with her. The major vessel serving her heart had ruptured, and no amount of Sidhe magic could heal her or breathe life into their dead child. Ronin withdrew from the other Sidhe after that, mostly because he didn’t want to hear their lectures about the whole debacle being his own fault. After all, they weren’t supposed to mate outside their blood. When he finally picked up the reins of command a couple of centuries later—or maybe it had been three—he held himself aloof and avoided confrontations with anyone, about anything.

He ground his jaws harder together. His internal inventory was damned depressing; it forced him to take a harsh look at himself, and he didn’t like what he saw. He glanced at Titania. She clasped Duncan’s and Colleen’s hands between her own, and his eyes widened. Had he truly spent the entire ceremony sunk in memories and self-pity?

It would appear so, he thought dryly. In moments, Titania would utter the final words, Duncan would kiss Colleen, and the ritual would be done. He barely had time to wonder why Titania hadn’t kicked up more of a fuss about Duncan marrying a mortal, when the bridal pair kissed.

The tiniest sigh escaped Roz, and he looked sidelong at her. Her full lips were parted in half a smile, and she looked captivated by the ancient binding that had unfolded, mostly without him paying one whit of attention to it. She leaned toward him, her earlier ire apparently forgotten. “They make such a lovely couple,” she whispered.

Ronin narrowed his eyes and looked hard at Duncan and Colleen, wrapped in one another’s arms and kissing enthusiastically. He didn’t know about the lovely couple part, because he didn’t view the world that way. “They do look happy,” he whispered back because he thought he ought to say something.

Bubba, who’d been standing off to one side, made a grab for a bag Ronin hadn’t noticed before. The changeling reached inside and Ronin’s internal alarm went off. The changeling was about to throw something at the couple. Had the creature been co-opted by demons? It wasn’t unheard of since their race contained a smattering of demon blood. Afraid if he hesitated he’d be too late, Ronin pulled strong magic and rose to his feet.

Before he could loose it, Roz fastened a hand around his lower arm. “It’s just rice,” she said, her voice still low. “He’s going to throw rice at them. Stand down.”

Ronin met her dark, luminous gaze. “What sort of custom is that?” he demanded. Magic thrummed around him, making the air shimmer in iridescent hues. The changeling indeed tossed rice high in the air, showering everyone within a ten-foot radius of him, laughed uproariously, and then did it again.

Ann Gimpel is a mountaineer at heart. Recently retired from a long career as a psychologist, she remembers many hours at her desk where her body may have been stuck inside four walls, but her soul was planning yet one more trip to the backcountry. Around the turn of the last century (that would be 2000, not 1900!), she managed to finagle moving to the Eastern Sierra, a mecca for those in love with the mountains.

It was during long backcountry treks that Ann’s writing evolved. Unlike some who see the backcountry as an excuse to drag friends and relatives along, Ann prefers solitude. Stories always ran around in her head on those journeys, sometimes as a hedge against abject terror when challenging conditions made her fear for her life, sometimes for company. Eventually, she returned from a trip and sat down at the computer. Three months later, a five hundred page novel emerged. Oh, it wasn’t very good, but it was a beginning. And, she learned a lot between writing that novel and its sequel.