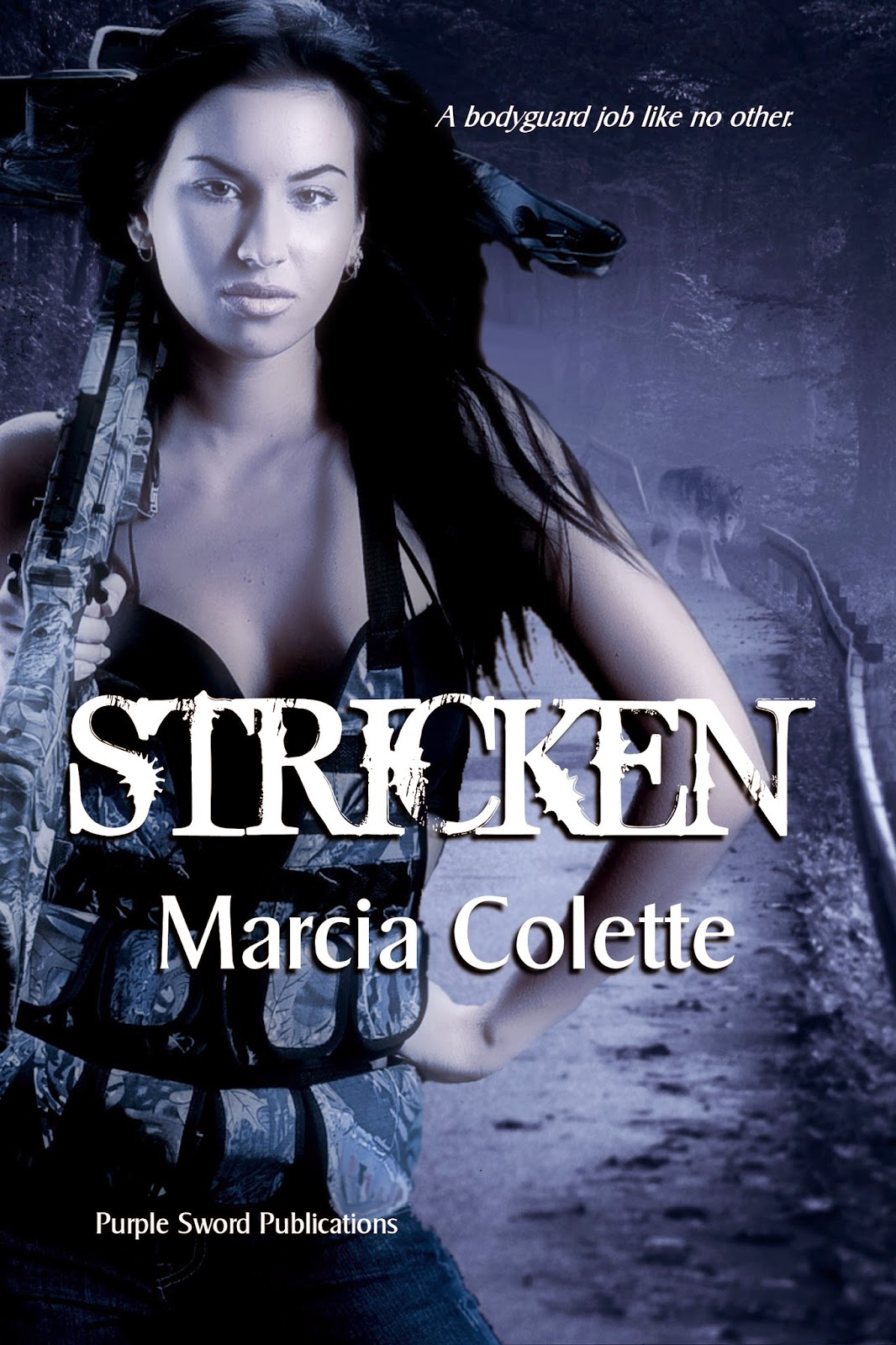 Personal tragedy convinces half-werewolf Alexa York to get away to the town of McCormick, Pennsylvania where she's charged with protecting Dr. Aiden Joss, physician to the supernatural community. Not only does she need the money, she needs the distraction. Unfortunately, she gets it in spades when Joss's personal issues and a myriad of dangerously sick patients make her new job nearly impossible.

A mysterious disease is running its way through the New York Order of the Amazons and leaving bodies in its wake. The same warrior who had chosen her clan over Joss has asked for him help. Even though the disease is real, Alexa has reason to believe his ex's sincerity is not.

Given the other numerous problems she has to deal with that are outside of her job description, Dr. Joss might be the biggest threat to his own safety. But, protecting him comes first. That’s difficult to do when his efforts to find an antidote put everyone in his remote clinic in danger, including Alexa.

I stood on the porch of Dr. Aiden Joss’s luxurious home pissed as hell. Someone was supposed to meet me at the airport in Philadelphia. I ended up having to take a cab because all of the rentals were booked from the only airport about twenty-five miles from the small town of McCormick, Pennsylvania. The taxi driver must have mistaken me for an oil baron with the fare he charged. He ended up having to leave me at the front gate because the intercom was busted. Thankfully, being a human hybrid had its advantages. After tossing my duffle over the ten-foot age, I followed by leaping over. Some security.

The downpour turned my black wavy hair into thick, cold tresses snaking down my neck and upper back. Sadly, my duffle bag was just as pitiful as I looked, since it wasn’t waterproof. I exercised more care when picking out my purse and laptop bag.

The front door opened. A tall, bulky man who looked like he missed his calling as an NFL linebacker stood against the golden glow of the interior. His face was criminal-hard, though something in his dark eyes said otherwise. He wore a white shirt and jeans with a knee brace around his left knee. He blinked.

“Oh, boy.” He hurried to unlock the storm door and let me inside. “You must be Ms. Alexa York.”

I struggled getting passed him with my wet duffle and carry-on and drenched clothes clinging to my cold body. “I am. I take it the phones don’t work around here either.”

He took my stuff and set it aside. “The power has been flickering all night. They just got the lights back on about three minutes ago. The phone is internet, so when the power goes out, everything goes out.”

I unzipped my cold, sodden jacket. “I get it. No phone no phone calls. Which is why I was stuck at the airport.”

He sighed. “Again, my apologies, ma’am. With so much going on, I only had a chance to worry about one thing at time.”

I glanced at him before answering. So much going on? The house was quiet and not a soul in sight. What could’ve possibly had him too busy to pick me up when he knew I was coming? Heck, I was here to be his replacement while he was on the mend. If he didn’t want me here, forgetting me at the airport or not sending a car to pick me up worked in his favor.

He offered his hand to me. “My name’s Sammy. I’m Dr. Joss’s med tech and assistant.”

“Med tech?” I looked him up and down. “But I thought you were his—”

He chuckled. “I’m really his assistant. I’m only his bodyguard when I have to be. And given the kind of world that lies beyond those gates, I find myself playing the latter more often.”

I closed my eyes and sighed. “I’m sorry if I sounded a little crotchety, but—”

Sammy waved his large hand. “No need to apologies. I’d be a lot more than pissed had I been in your shoes. Speaking of which, let me show you to your room so you can get some dry clothes on.”

Snorting, I glanced at the puddle forming around my duffle. “Dry clothes, huh. That would be nice.”

“No worries, Ms. York. I’ll find you something.”

“It’s Alexa, by the way.” Those close to me called me Lex. We weren’t there yet.

My room was upstairs on the second floor along with five other bedrooms. Every piece of furniture was stained pine and sitting against light blue walls. Thankfully, I had my own private bathroom. When I looked out of the bathroom window, I noticed a light coming from the woods somewhere behind the trees.

Had it not been for Wesley Dane, a full-blooded werewolf friend of my family, I wouldn’t be here to play bodyguard for one of his closest friends. It wasn’t the thousand dollars a day, tax-free money for my services that brought me here. I needed the distraction more than everything.

“So how much do you know about me?” After snuggling into a thick, warm robe, I dried off my hair with a towel and opened the bathroom door.

Sammy was still there, though keeping his distance by waiting in the hall. I thought it was weird, but whatever, seeing as this was more his house than mine. “Enough, he replied. “You’re half-werewolf, which is extremely rare. You’re also married, which means either your husband, who’s a full-blood, or Dane is going to tear Dr. Joss apart if anything bad happens to you. Although, that sort of defeats the purpose of you being the doctor’s bodyguard.” He half-smiled.

“Are you expecting me to be torn apart?”

“No,” he chuckled. “But I expect you’ll be put through the ringer.” He pointed at the fresh clothes on my bed. “The best I could come up with are some sweats, an oversized tee-shirt, and some thick socks we typically give the patients. I promise I’ll have your clothes cleaned and dried by the time you wake up tomorrow. That is, I hope you can stand the scent. I bought some unscented detergent when I found out you were coming, but I didn’t have a chance to wash those particular clothes in them.”

My lips pursed together in a grin to keep from laughing. “Relax. My senses might be heightened senses, but not that much. I actually like the smell of laundry detergent. Flowers are preferable to anything else.”

“So those will be okay?”

I nodded. “They’re fine. And thank you. For the robe and clothes and stuff.”

“Not a problem.” He thumbed over his shoulder. “I don’t know if you’re hungry or anything, but I have some chili on the stove, too. Your appetite is…?”

“Human. It’s one of the things I actually like about being half-werewolf.” Compared to others. I caught myself before saying anymore.

Over the last three weeks, I wished I was more human than some freak living in the middle of that world and the werewolf one. Perhaps things might have turned out better between my husband and me.

I forced a smile to my face. “So what kind of supernatural is Dr. Joss?”

Sammy sighed. “I’m not at liberty to say.”

“Really? You know what I am, so why can’t I know about him?”

My smile faded and I crossed my arms. “I did, but he sealed his lips on that one, too. Said I’d find out on my own.” The conversation took a nosedive after that. I had to remind him that both Matt and my father would break him in half if he sent me to a maniac’s house. Of course, I knew Dane well enough to know he’d never do that either.

Chuckling, Sammy turned and started down the hall. “I can’t say my chili is award winning, but it did get an honorable mention at the state fair.”

So that was how he wanted to play it. Good.

Marcia Colette didn’t discover her love for reading until her late teens when she started reading John Saul and progressed to works by Bentley Little, Stephen King and Laurell K. Hamilton. Her reading tastes convinced her to write paranormals where curses cause people to shift into spiders, psychotic and telekinetic mothers are locked away in attics, and murderous doppelgangers are on a rampage. Let's not forget about the hunky werecheetah coalitions who live throughout North Carolina. As long as she can make it believable, that's all that matters.

Born and raised in upstate New York, Marcia now lives in North Carolina with her mom and beautiful daughter. They’re not raising zombies in the backyard. There aren’t any hellhounds living in the den, only a rabbit and a cockatiel. So where she gets her ideas is as much a mystery to her as anyone else.

The best place to find her--when she's not stirring up trouble--is on her blog where she loves connecting with readers.