Release Day Spotlight: Taken by a Dragon by Felicity Heaton 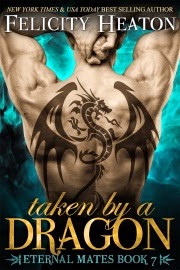 Possessed by a need to save a beautiful Amazon warrior from the vision he witnessed, Loke snatched her from the midst of the battle between the Third and Fifth realm of the demons, and carried her to his home deep in the black mountains of Hell to protect her. But as the fierce little female awakens, he finds she’s anything but grateful, and his dragon instincts roar to life to warn she might be more to him than an enemy—she might be his fated female.

Anais remembers meeting a handsome warrior in the heat of battle, a man who was her enemy but who looked at her with eyes that held dark heat and wicked promises. When she wakes to find that same dragon shifter has taken her captive, desire is the last thing on her mind, but escaping him to return to Archangel, the hunter organisation she works for, sounds less than appealing when he reveals the reason he took her—to stop her from dying.

Can Loke protect Anais from the dangers of his realm and how far will he go to save her from the future he keeps witnessing? Can Anais resist the fierce attraction that burns between them as hot as fire and stay true to Archangel or will her heart be taken by the dragon?

She had passed out at some point.

It might have been shortly after the dragon shifter who had abducted her had hit a height that had made her vision do strange things, zooming in and out as she had stared wide-eyed at the thousand-foot-plus drop to the forbidding black lands below. She had certainly lost the contents of her stomach at that point.

Anais lay with her eyes closed, feigning unconsciousness, keeping her breathing light and even and her heart rate steady and slow. She wasn’t alone. She could feel the piercing gaze of the man who had snatched her from the midst of the battle.

A battle where they had been enemies, fighting on opposite sides. Her in the army of the Third Realm of the demons, and him on the side of the Fifth Realm.

When she had set eyes on him, laying in the middle of the mad fray, staring at her and Sable as if they were goddesses or something born of myth and legend, the last thing she had expected was him to transform into an incredible and enormous blue dragon, and she definitely hadn’t expected him to snatch her and fly off with her.

Anais breathed slowly, biding her time, waiting for her faculties to all come back. Years of training cycled through her mind, everything she had learned as a huntress for Archangel coming to the fore now that she needed it. Calm flowed through her and she clung to it, using it as a shield as she told herself on repeat that fear wasn’t an emotion she was going to allow herself to feel.