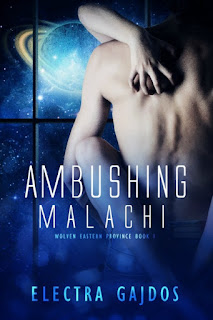 Malachi Keen’s frustration grows as he hunts for his sister, Kiara. The search leads him to more trouble than just an irritating sibling when he finds himself in the embrace of a tantalizing stranger. What turns out to be a chance encounter will change his life forever.

Jez Baldovino owes a life debt to an influential Wolven. To pay up, she must complete what she thought would be a simple task – retrieve some stolen data. The situation quickly becomes complicated and she is forced to use a handsome, unsuspecting stranger.

Malachi realizes that not everything is what it seems; unknown enemies and a beautiful female determined to escape him was not in his plans for the day. His plans change when danger surrounds Jez. There is only one male that is allowed to hunt the woman who ambushed him with a kiss – him!

Using the empty service hallways, he took a direct path to his sister. He was almost to the latte shop when he was caught off guard by a pair of dainty hands wrapping around his forearm and pulling him through the back door of a busy restaurant kitchen.

He only caught a glimpse of the stunning woman with long blonde curly hair before she yanked his head down. When she licked the seam of his mouth, he naturally opened for her.

Then he closed his eyes in ecstasy, tasting the sugary sweet glaze of red berries coating her lips. He didn’t care what part of her he griped, as he pulled her body to his.

She placed a hand on his hip to steady herself, and her scent of wild apple blossoms sent possessive desires through him. A new sense of joy rushed inside his soul as his inner voice chanted, Mine! Mine! Mine!

He growled with displeasure when she took her candy-flavored lips away.

Her dazzling blue gaze met his. “Thanks, Lumberjack. I so needed that.” She used the nickname of the Grizzly Mountain Wolvens, who chose to live in the woods to be closer to their ancestors, the wolves.

She needed that? He needed her…forever. Malachi was sure he’d just found his mate.

She gave him a wink and took a couple of steps back from him.

He frowned, not wanting her to leave his side.

When he reached for her to bring her back into his embrace—where she belonged—he stumbled. His legs suddenly felt like lead.

He grabbed for the nearest dish rack for support. Each time he blinked, the lids of his eyes got heavier. Then he dropped to the floor.

His clouded mind tried to commit all the details of his mate to memory. Her almond-shaped blue eyes were so expressive, and her upper lip was thinner than the bottom.

His gaze traveled down the length of her body, noting the indent in her waistline that fanned out to the kind of hips a male could latch onto while mating.

She knelt at his side. “Sorry, Lumberjack.”

Electra Gajdos is from Winnemucca, Nevada and currently lives in West Michigan. She is a wife and the mother of two beautiful genius children. (Maybe not true geniuses, but a mother is always partial to her kids.) She won’t bore you with her childhood love of all things sci-fi and the game of chess. But she will let you know she once called the police to save a man from jumping off a three-story building. What she didn’t know was the man was a mannequin and part of an advertisement. No lie! Thankfully, it gave the police officer a good laugh for the night. This is just one her many good deeds gone wonky, and she looks forward to sharing more of them with you.

Chat with Electra at www.electragajdos.com