Getting in The Mood: How to Write Every Day
By Jamie K. Schmidt

If you’ve got stories in your head just dying to be let out, the hard part of writing is finding time to write.  But at the end of the day, sometimes all I want to do is kick back with a glass of wine and watch Game of Thrones on HBO, read a book, or knit something soft and fuzzy.  And during the weekend, I’ve got my house to clean, chores to do, and time to spend with my family.  That’s not a lot of time left to write.  The best way I’ve found to clear out time to write is to schedule it in just like a doctor’s appointment and stick to it.  Finding that sweet spot, however, is the tough part.

Some writer’s set the clock an hour or so early to get their writing time in.  That’s just not me.  I’m not a morning person and I don’t wake up fresh as a daisy.  But it might work for you.  John Grisham used to write on a legal pad during the down time of his day job, on lunch and during train or bus rides.  I tend to take a long time to get going and then when I’m on a roll, I don’t want to hit the brakes just for a silly thing like my boss wanting a report on his desk by three p.m. However, if you’ve got some holes in your day, make sure you always have a notebook or an app on your tablet or phone to help jot down ideas and plot points.

Then, there’s what I do.  When I’m not on deadline, I write from 8:00 p.m. to 10:00 p.m. every night.  This time slot works for me because dinner is done, my son is in bed and I don’t have anything else weighing on me.  If I didn’t get a chance to do it before eight, I can do it after ten – or put it off until tomorrow.

When I am on deadline those times get stretched:  eight to midnight and if that’s not cutting it, six to midnight (My family has to fend for themselves for supper that week and I do a lot of freezer meals and crock pot dishes.) and all day Sunday.

I’m also crazy.  Not everyone is going to have two hours a day.  But everyone does have some wiggle room in their schedule.  The key is finding it.  In some cases, you might have to give something up that you really enjoy – at least until the book is done.  For example, if I didn’t have my nights free – like if I had to work two jobs?  I would give up a portion of my sleep time and set that alarm clock earlier.  I’d do it in stages, though, so my body didn’t rebel.  A half hour for a few weeks and then build up to my two hour block.  The thought of having to do that is so unpleasant to me, though!  But you know what would be more unpleasant?  Not being able to write.

So if the getting up early didn’t work, I’d try something different.  Maybe I’d write during my day job’s lunch hour and my night job’s break and finish up with an hour before bed?  If I was a stay at home Mom and had to care for my children and domestic engineer there are no lunch breaks.  So maybe I’d look into play dates where, I’d trade off  with another Mom.  When the kids are at the play date, that’s my block of writing time for the week.  Or I’d take a five hour energy drink and put in an hour after everyone was in bed.  Or I’d talk into a microphone while we were going for walks and transcribe it later.  And I have to admit, I’ve also used the television for a ½ hour writing sprint.  I don’t know what it is about that purple dinosaur, but if it wasn’t for Barney, I wouldn’t have been able to take a shower for the first three years of my son’s life.

When I get my butt into the chair, utilizing the time so I’m not daydreaming  plotting in my head or dilly-dallying around on the internet researching is almost as important as finding time to write.  During the day, long before I sit in my writing chair, I decide what I’m going to work on that night.  I try to hit two thousand words, so it’s going to be either a scene or a group of scenes.  Then I let the back brain percolate on it for the rest of the day.  If I come up empty or have written myself into a corner, I write another section of the book.  One of my favorite things to do when I’ve got writer’s block is to write the final chapter – complete with THE END.  I find that motivates me to fill in the middle so I can have a finished product.

Finding time to write is a lot like finding time for yourself, in that a lot of writers put it low on their things to do list.  Some days are like that.  There are days when I’m going to bed with my son at eight p.m.  There are days when I’m writing past midnight when my fingers are still going strong, but my eyelids are closing.  Making an ironclad appointment will eventually make daily writing a habit and you’ll find yourself scheduling things around your writing time.

Here’s an excerpt from my newest release, The Queen’s Dance.  It’s a paranormal romance with shape-shifting dragons.

Margery was lying out in the sun again. She felt the heat press into her bones from the hard deck under her and the rays beating into her skin.

Listening, she could hear the creak of the deck chair and the splash of the waves. Where was Remy?

She wanted to open her eyes and sit up, but she didn’t know where they were. Would she be flashing all of Lake Champlain? Her hands inched around on the deck hoping to find her bikini. No luck. But she did feel a sheet balled up at the very edge of her reach. Snatching it, she wrapped it around herself and sat up and wobbled—she’d had tequila hangovers that didn’t feel like this. When her eyes adjusted to the sunlight, she realized she was alone.

“Remy?” she called. She didn’t feel up to standing, so she sat there on deck and wondered why she’d passed out. It had just been starting to get good, too. Margery touched her lips where Remy’s kisses had left their brand then smiled and hoped he didn’t think he’d frightened her.

While she’d gotten really cold, and the dark did remind her briefly of being a prisoner below deck with the pirates, that’s where the similarities ended. Margery knew Remy would never hurt her. She wasn’t sure why she’d passed out, but it had nothing to do with him. Concentrating, she tried to emerge into a dragon so she could fly around the lake, but pain jackhammered into her skull until she was retching bile over the side of the deck.

She thumped back to the deck and closed her eyes until the pain went away, which took longer than she expected. Luckily, the sun’s warmth bored into her every pore, and the headache eased to a mild throb. Margery stretched and rolled over so she wouldn’t get sunburned.

Too bad she’d passed out. She didn’t quite get the politics of the consort thing, but if it was a choice between Remy, Casimiro, and a total stranger, her best bet was Remy. It didn’t have to be love, after all. Not yet, anyway. It would have been nice to have a night of mind-blowing sex and fall asleep cuddled up in a man’s arms. Ever since Casimiro did a number on her heart, Margery wasn’t too keen on letting that organ decide her bed partners. Her libido had good taste, and right now Remy would fit the bill. If she could stay conscious for it.

A big wave lifted the boat, and she clutched at the deck as the vessel swayed nearly to tipping. Then Remy launched onto the deck. He was fully dressed and not even dripping.

She squinted up at him. “How do you do that?”

“Did you have a nice night?” he asked, turning his back on her to go to the helm and raise the anchor. 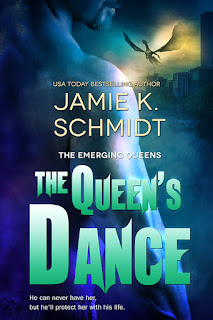 After newly shifted dragon Queen, Margery Cooper, is rescued from smugglers she has a choice to continue to hunt down the story that nearly killed her when she was an investigative reporter or embrace her royalty and build a court of protectors and studs.  Remy “Champ” Champlain is first on the scene and assigned her protector while she sorts out her affairs.  He wants nothing more to get back to his solitude and his small town, but as an unclaimed dragon he doesn’t get a choice.

The Queen is his responsibility until her court is formalized.  He wants to settle her down right away, but she has this wild hair up her Queenly butt to find out who is smuggling dangerous drugs into the country.

Sparks fly between them, but as she's a sky dragon and he's a water dragon, well she can't swim and he can't fly and those aren't the only differences they're facing.

An avid knitter and jewelry maker, Jamie is never bored.  She can often be found with a mug of tea on the computer flanked by her little dogs & fluffy white cat.  You can follow her on twitter at @Jamiekswriter or on her author page on Facebook. When she's not writing or crafting, Jamie loves playing games, everything from board games to strategy card games, console and online MMORPGs.

Enter to win a dragon coloring book -go to www.jamiekschmidt.weebly.com  and scroll down the first page and add your email address to the subscriber list. 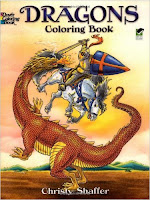