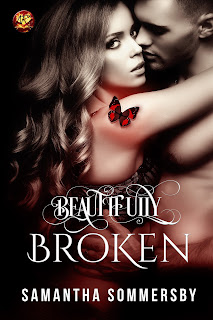 She was broken by darkness and violence...

Jennifer Jones thought she’d left her past behind, but when Maclain Moore crosses her threshold it all comes rushing back. He was to be her roommate, nothing more. Then the leather-clad bad boy reveals something that rocks the very foundation of her structured, fiercely independent life, and the protective wall Jennifer built around herself is shattered.

He had faith in a beautiful future…

Although she vowed she’d never bare her soul or share her secrets, soon Jennifer finds herself opening up to Mac in ways that make it hard to keep him at arm's length. She almost lost her life to a man before and doesn’t want to risk getting close to this one. As Jennifer’s world spins out of control, she fears their growing passion may become the only tangible thing she can cling to. Can she give in to her feelings for Mac without losing herself?

Mac grabbed a beer from the fridge, opened it, then headed back toward his room. “No, I would forego napkins altogether and have the guests all wipe their mouths on their shirtsleeves, like I do.”

Jennifer rolled her eyes. “Of course.”

He turned around. “Do they really make napkins with recycled content?”

“We’re not buying them.”

She followed him to his room, pausing at the entrance. “They’re yucky looking and they cost more.” She leaned against the doorframe.

He sat his beer on his nightstand before climbing back on the bed. “But they’re better for the environment. Don’t you care about your carbon footprint?” Mac opened a case file and began to read.

Jennifer took a minute to look around. The room had been totally transformed in the last two days. Initially it had contained just the dark walnut antique four-poster bed and dresser surrounded by white walls. The first change had been those walls. When Jennifer came home from Rachel and Tom’s on New Year’s Day, she discovered Mac had painted them red. Red.

“No. It’s not red. The guy at the paint store said it’s called ‘Rendezvous’.”

“Right, rendezvous!” She laughed and shook her head. “Did he give you a discount?”

“I think it makes a statement.”

“What kind of a statement?’

“Trust me, I’ve got a vision. It’s going to be great,” he replied, not deterred in the least.

And he was right. After he painted the walls the rich wine color, he had stenciled on the Chinese symbols for peace, love and faith. He’d also positioned a three-by-five jewel-toned oriental rug between the antique dresser and the footboard of the bed. The richness of the colors complemented the dark wooden shades of the hardwood flooring and walnut furnishings. There was even a large tray of sorts resting on top of the dresser that Mac had fashioned out of an old portrait frame and filled with pillar candles.

Jennifer walked around the bed en route to the chair. The bed itself took up most of the room. He’d adorned it with a black chenille duvet cover, trimmed in red Chinese silk not unlike the material her robe was made from. There was a new piece of furniture. He had placed it so it sat between his bedside and the black leather chair he had retrieved from storage and was using it as a combination nightstand and side table. In addition to a clock and his beer, the table held a lamp, about four or five books, and a pair of reading glasses.

“New table and lamp,” she observed, sliding into the chair.

“Found the table this morning over on Adams in one of those little antique stores.” He continued to flip through his case file, scanning the contents.

The overhead light in the room was turned off. The only light came from the candles and the bedside lamp. The room with filled with a warm glow, and interesting shadows danced across the dramatic walls as the flames of the candles flickered.

“Did you have the lamp already?”

“I should let you work.” She started to get up.

He tossed the file aside. “No. I need to stop.” He tilted his head toward the lamp. “I bought it in a store up in L.A., in Chinatown. I don’t remember why I was there, probably killing time. My mum was sick. I was practically living at the hospital. I bought it for her. Everything in that room was so cold, so sterile.”

Mac nodded. “We’d sit there together and stare at it. I don’t know what it is. Maybe the way the light gets diffused as it passes through the flax paper but it seems—”

Jennifer leaned back in the chair, kicked off her shoes, and propped her feet up on the edge of his bed. “The place looks great. It feels nice.”

“Maybe a hot bath.” She closed her eyes. “How do you feel about take-out Chinese for tonight?”

“Can’t join you tonight, blondie.” Mac got up, then drained the rest of the beer. “I’ve got a date,” he told her, setting the bottle back on his nightstand.

Jennifer’s eyes flew open. She quickly sized up his appearance. “You do not have a date.”

Mac pulled his leather coat out of the closet. “Why would you say that?”

“Because you’re not even dressed.”

Mac looked down at his obviously clothed body. “Of course I’m dressed. What are you talking about?” He picked his keys and billfold up off of the dresser.

“You’re not dressed up. You know, so you can make a good first impression.”

“It’s supposed to be casual, pizza and a movie. This is what I normally wear.” Mac stuffed his billfold into the pocket of his jeans.

“That doesn’t mean you shouldn’t make a little extra effort. You know, put your best foot forward.” Jennifer stood and stretched. “Did you even shower?”

“Course I did! I showered this morning when I came back from my run.”

“That was for work. I meant for your date.”

“Let me guess.” He crossed his arms in front of his chest. “You’re one of these girls who puts on airs, trying to impress so you can reel some unsuspecting bloke in. When, may I ask, are you supposed to start to show your date the real you?”

“You think your date is going to let you see the real her?”

“Don’t know. The truth is I have no control over what she’s going to do. What I do know is if I like what I see and she’s willing to go out with me again it’ll be because she saw something in me she liked. I won’t have to be guessing about whether what she liked about me was the façade.” Mac walked back over toward her and retrieved his empty beer bottle. “Recyclable.”

“You know what I think? I think you’re being a teensy bit disingenuous.”

She gestured toward him. “This is all part of an image.”

“What are you talking about?”

Mac wrapped the arm holding the beer bottle around her waist and in one fluid motion pulled her body flush against his before bending her backward in a low dip. “You don’t think I can be bad?”

“Little girl, you have no idea,” he whispered into the shell of her ear, his voice low and seductive. Then he nuzzled her at her neck, breathing her in. “We’re all just a little bit bad.”

“You mean, what you’ve shown me? This great, sensitive guy I’ve been getting to know isn’t the real you?” She was slightly breathless.

Mac lifted his head and looked searchingly into her eyes. He was so close. He smelled so good. He felt so good. Her entire body tightened in anticipation.

“We all have a dark side,” he murmured. “A part lurking within us, longing to live for the moment, to act on wild impulses, to give in to temptation.” Mac licked his lips. She could practically taste them. “Don’t you ever feel that?”

Jennifer’s heart was racing and her mouth was dry. It was as if time had suddenly stopped. As she gazed into his impossibly blue eyes, she realized this was one of those defining moments. One of those times when, with a single action, you could change the course of your life. If only you were willing to take the chance.

“You’re going to be late for your date.”

“Right.” He straightened, bringing her back to an upright position. “I hate to keep a beautiful girl waiting.”

“Right now, I’m sorry I agreed to it.” Mac reached up and tucked a loose strand of hair behind her ear. “I’d much rather stay here and order Chinese with you.” Then he turned around and left her. Alone.

Samantha Sommersby left what she used to call her “real life” day job in 2007 to pursue writing full-time. Sam’s background in the psychiatric field is apparent in her work and allows her to bring a unique perspective to her characters and stories. She currently lives in southern California with her husband, son, and cocker spaniel, Buck.

Her husband is a social worker who works with abused children. He’s an avid sailor who loves to surf, and you’ll find bits of him in every hero that Sam has ever written. Her son is wonderfully sensitive, with a sarcastic sense of humor. He plays the piano, composes his own music, is a competitive fencer, and worships video games. On the rare occasion when Sam manages to set aside some play time for herself, you’ll most likely find her reading a book, at the movies, or out wine tasting.

Although she’s written a variety of genres, Sam happily spends most work days immersed in the world of the Forbidden, a world where vampires, werewolves, and demons are real, where magic is possible, and where love still conquers all.

3 winners to receive ebook of The Soldier and the Spy by Samantha Sommersby.