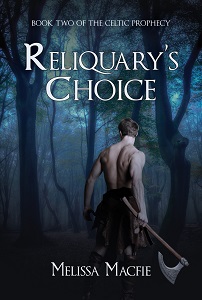 Brenawyn knows loss. Her mother, her father,  her husband…that bastard. She can’t let Alex die, too.

With the Coven closing in, Alex flees with Brenawyn to Tir-Na-Nog, even though he knows he is setting her on a path of no return. Brenawyn must say goodbye to her family forever and traverse time. She is the only one who can fulfill an ancient prophecy.

But what is Alex hiding? Has he condemned Brenawyn to serve the gods forever? Or will the depth of his sacrifice bring salvation to them both?

In Book Two of The Celtic Prophecy, Alex prepares Brenawyn to travel to ancient Scotland to claim her rightful place.

Brenawyn thought about what her grandmother had just said and nodded. Her memories of the Lughnasadh ceremony were hazy; she had been possessed by the spirit of Aine, the goddess of fertility. Even though her memories weren’t clear, her face grew red at the thought of the steamy interlude with Alex that had followed the ceremony, and she quickly changed the subject.

“What of visions and omens?”

“You should know better, Brenawyn, than to ask that. Is it so different than Catholicism that people have visions? It is written in the Bible on several occasions.”

“And as far as omens go, people have always tried to interpret meaning from their environment. Is it so farfetched to try to determine when it’s going to rain, or if the storm will be a severe one? I mean, the method may seem odd, watching for changes in animal behavior, but animals are more sensitive to things like that.”

“Now that you mention it, I think there were studies done on horses being able to predict earthquakes.”

“But some methods are extreme. Do not tell me you hold with evisceration as a means of prediction?” Her pointed question brought up vivid scenes of horror. Though she hadn’t seen Barbara’s body herself, the kindly bakery owner across the street from her grandmother’s place, the scene had been described to her in minute detail by the police the night of her murder. That, combined with the blood stained cobblestones left after the crime scene had been fully processed, left her with night terrors. If imagination was a poor substitute for actual sight, she’d rather stick to imagination for it filled in the gaps of what was a drawn-out, grisly death.

Barbara had been killed by the Vate to help the Order locate Brenawyn. Brenawyn, despite all she had seen in the past few weeks, was still finding it difficult to accept that her twenty-eight years of living in a normal, fact-based, scientific world were at an end; that she now lived in a world where gods and goddesses and magic were real, and that she was some kind of reincarnation of a long-lost high priestess.

“Brenawyn, honey, look at me. I know what you’re thinking. Don’t go there. You’ll just be beating yourself up trying to make sense of her death. To these people, her life meant nothing. There is no reason. They will stop at nothing to get to you. As for your question, no, of course I don’t hold with it. But these people do very much believe in it and you have to accept that so you can ward yourself against it.”

Brenawyn stifled back tears and nodded her head.

“It is an ancient custom. Back then, you have to understand, it was a different time, savage, harrowing, people unsure of where the next threat would originate. I can understand why they did anything they could to gain some information on what the future might hold for them. They were trying to carve out an existence, some stability and surety in a time when nothing was constant. Blood offerings do offer some clarity; they just don’t have to be as vicious as what was done to Barbara.”

She opened her hands and showed them to Brenawyn, a scabbed over slice to the meaty part of her palm showed red. “Why do you think my hands are so scarred?”

Tears welled in Brenawyn’s eyes as she took her grandmother’s hand and covered it with her own, “When did you do this?”

“The night that Barbara was murdered. Alex asked me to scry for a location of the Oracle.”

“Visions are like dreams. They don’t adhere to the linear. They are illogical and are often full of symbols. The blood is like wearing goggles when you swim underwater in the ocean. It makes things clearer; there is still the murk to wade through, but it makes it much less disorienting.”

“Is it just human blood that makes things clearer?”

“In ancient times animal blood was used more frequently, but it depended on the situation and what vision the seer was seeking. I’ve used animal blood.

“Listen Brenawyn, I didn’t go out to slaughter an animal for the sole purpose of using its blood in a ritual. You seem to forget I was a farmer’s wife. If we wanted to eat, we had to kill the chicken or lamb. That’s the truth of it. We have moved so far away from the way things were. You go to the grocery store to buy chicken cutlets, but do you ever think of how those cutlets got there? Someone had to kill the chicken, cut it up, package it, and send it to the store. Don’t look at me with that disgust on your face,” Leo said indignantly.

“It’s okay. Mine is not the first religion to do this. There are Old Testament stories that refer to acts of sacrifice, but little thought is given to how things must have been. Animals were scarce and expensive. If a sacrifice was to be made, the people sacrificed according to their beliefs, but likely retained the meat to feed themselves and only sacrificed the inedible. Greek and Roman accounts made mention of this too.”

“I think you know the answer to that already, but we’re a long way from that. I think we got off track here.”

Brenawyn nodded, took a breath, and said, “So, willingness is the first requirement. What is the second? How many others are there?”

“The second is precision. You took the time to study the ritual; you said the proper words giving thanks to all the gods. How did you prepare?”

“I heard you practice it so many times, saw you perform it for years.”

“Wait, wait. Let me think.” Brenawyn got up from the table and paced away, muttering to herself.

“Your grandfather did that.”

“He mumbled to himself when he was thinking about something important. You reminded me of him just now.”

She smiled. “Nana, do you remember the night you told me that you were a Druid? A few days before the ceremony? I stormed out of the house to clear my head.”

“Well, I ran into Alex and we ended up taking a walk to the ceremonial grounds. He was telling me stories about the ritual and what the officiant would do the night before.”

“Ah, did it have something to do with asking permission?”

Leo nodded her head, “The picture is becoming clearer. Did you by chance ask permission?”

“Ugh, yes, I didn’t know what I was doing. I was so swept up in the story, that I didn’t even think that in so doing it might be seen as disrespectful.”

“Well, now it makes more sense that your latent abilities were activated by the thanksgiving ceremony. Brenawyn, would you do me a favor? Really think about this before you make a decision. Your life has become more complicated and dangerous, but I think it’s manageable yet. If you choose this you will own the danger. Choosing this lifestyle, you will be trained to use your magic and will be able to defend yourself. But make no mistake, if you accept this destiny, they will come for you, and there will be no going back.”

“So, no pressure then. Thanks.”

“Brenawyn. Just think about it. Please. Spend some time with Alexander. He knows all of the history; he can teach you the basics before you have to decide anything.”

For most of her life, Melissa Macfie has pursued artistic endeavors such as drawing, painting, and sculpting. She holds a M.Ed. in English Education from the Graduate School of Education at Rutgers University, and has spent the last sixteen years as a public school English teacher. She also spent a short time serving as the co-host of Alpha Centauri & Beyond, an Internet talk radio show about science and science fiction. She lives in New Jersey with her husband, Donald. Their children, Elizabeth and Donald, are grown and pursuing their own dreams.