Book Spotlight & Giveaway: Rise of a Viking by Sky Purington 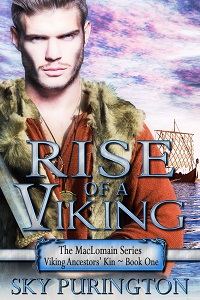 Cybil is thrilled when she and her family inherit a million dollar ocean-side house in Winter Harbor, Maine. It’s a chance to finally bring her sisters back together and right old wrongs. But problems arise. Her gift of prophecy grows stronger. A Viking from the past haunts her. And that old ash tree in the front yard? It has taken on the otherworldly qualities of Yggdrasill, a tree that connects the nine worlds in Norse mythology. Soon caught in its power, she’s whisked back in time to tenth-century Scandinavia.

Of dragon blood and set to inherit the throne, Heidrek Sigdir tries to keep Cybil away, but the gods have other plans. A fate designed to make him pay for past grievances. Yet when he finally lays eyes on her, he wants nothing else. They share a connection unlike any other. Poignant desire. Incomparable need. Tempting change. Even so, he must let her go. She should be with his brother. Still, nothing is what it seems. A new enemy is determined to destroy all and Cybil is special to him and his people in ways nobody anticipated.

Many revelations come to light when Heidrek and Cybil are forced to journey across the rugged lands of Norway to reach the home of the seers at the peak of Mt. Galdhøpiggen. Hearts will be tested and lives forever changed. Will a new Viking King rise up and keep his people safe? Or will his endless draw to a modern day woman be his ultimate ruin?

Their eyes held for a long moment before a heavy drop of icy rain hit her cheek. He wiped it away gently then took her hand. “Let us find shelter.”

They didn’t go far before he pushed aside a heavy swath of roots and led her into an alcove about the size of a large walk-in closet. Plush green moss crawled along the walls and floor. Stones created a semi-circle at the rear with a small bushel of roots and sticks at its center. When Heidrek’s eyes glowed pale blue, sparks hissed then ignited a small fire.

“Won’t it get smoky in here,” she started before she realized a fist-sized hole was above it, effectively sucking the smoke away. Cybil peered up. “That goes all the way to the top? This mountain is easily hundreds of feet tall.”

“Yes, it goes to the top and is one of many. All of the mountains in the Place of Seers house sanctuaries like this,” he explained as he removed his fur and laid it on the ground. “They come here not only to worship but to mate.”

“Mate?” She perked her brows and couldn’t stop a small grin. “Where they worship?”

“They are Viking.” A rare twinkle lit his eyes. “Our mating and religion go hand in hand. Both are afforded equal devotion.” The corner of his mouth inched up. “And of course, a fair amount of worship is applied whether communing with the gods or mating.”

“So no churches or sex behind closed doors.” She chuckled as she removed her fur and laid it beside his. “Interesting.”

“Many of my people prefer mating in the open.” He returned to the entrance. “Sex is something to be enjoyed wherever and whenever the urge comes upon us.” There was a mischievous glint in his eyes when they slid over her. “Have you mated in front of others, Cybil?”

“Not that I know of.” She met his blossoming grin and held her forefinger within centimeters of her thumb. “Though I always had a little thing for leaving the light on at night and the curtains open during sex. Does that count?”

The flash of desire in his eyes as he envisioned such a thing spoke volumes. “My lodging at the fortress has plenty of torchlight and firelight as well as windows.” He shot her a predatory look. “And I will make more windows if you wish. Many more.”

“No.” His eyes were full of promise. “If anything, it will likely get too hot.”

It occurred to her that this was the first time she and Heidrek had come close to flirting, and she liked it. There was more to him than what he showed the world. A playful side she would enjoy exploring for years to come. She tore her eyes from his at the thought, surprised by how easily she had fallen into seeing a future for them.

Sky Purington is the best-selling author of over twenty novels and several novellas. A New Englander born and bred, Sky was raised hearing stories of folklore, myth and legend. When combined with a love for nature, romance and time-travel, elements from the stories of her youth found release in her books.

A $25 gift card to winner’s choice of Amazon or Barnes and Noble.